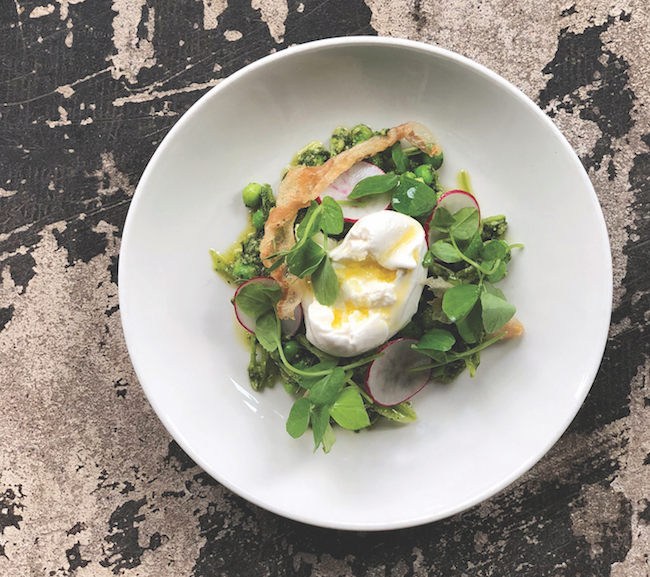 All images by Eliesa Johnson of The Restaurant Project.

“Where would you like to go for Mother’s Day dinner?” my daughters kindly queried.

Friends had asked the same question on my birthday. And, many times, after a show. My answer was always the same, but it never worked out. Reservations were as hard to come by as a seat on a NASA shuttle.

I’m talking about Young Joni, of course. When, on a recent Tuesday, we finally decided to pack our sleeping bags and wait in line sans a name on the list, we got lucky: two seats at the bar within warming distance of the roaring wood-fired oven.

You know the backstory by now. Food fanatic Ann Kim and her business-brained husband, Conrad Leifur, launched Nordeast’s answer to Noma (reserve a year in advance to dine in “the world’s best restaurant”). The couple’s third go, after success reinventing pizza as we know it at Pizzeria Lola and Hello Pizza, this generous, softly lit space radiates not only the warmth of wood in its décor and aroma but, even more essential, the warmth of the amiable, well-trained staff (one member of which eagerly nabbed a stool next to me to summon her favorite pizza — the Broccolini — on her day off).

To start: a glass of plavina, a mellow Croatian red, for me, and the Italian nebbiolo for my pal. The café’s wine list is long on bottles — pricey ones — but short on BTG, as it is on cocktails (eight) and draft beers (five).

But we’re here for the food, to explore the influences of Kim’s Korean heritage on the menu’s listings, such as our starter: short ribs ($13), sweet and nicely sticky — a couple of thin slices, tender as you please, coated in a kalbi marinade, spiced with chimichurri, then softened and deepened with a charred serrano yogurt. (Talk about cross-cultural marriages that work.) Or the sweet and spicy spare ribs ($12), Korean-ized with gochujang barbecue sauce and pickled veggies. Or the halibut, attended by asparagus, peas and a napa kimchi butter ($26), untasted. Next time. (Or not. Having eaten — not by choice — kimchi three times a day in Korea, I’ve had enough for several lifetimes.)

Bypassing the quartet of salads ($9–$12) — some straight-ahead, others tailored with an Asian touch — we scanned the vegetable list ($10–$12) and summoned the cauliflower, already a local legend, and for good reason. A vast bowl of florets came dressed for success with shisito peppers and a saffron-touched chermoula, along with pickled Fresno peppers, sweet bursts of golden raisins and savory notes of almonds, smoothed with a cauliflower yogurt.

Same thumbs-up for the mix of creamy burrata cheese and snap peas, accented with mint-basil pesto. Next time: the Japanese sweet potato, lapped with charred scallion crème fraiche and flakes of dried bonito. Frankly, these are the stars of the whole enterprise and the dishes for which I’d return.

But you want to hear about the pizza, right?

Fifteen are listed, sized for two to share, from a simple marinara ($8) to more offbeat creations such as the Pepe ($17) with clams, Parm and chili flakes, or Basque ($16), spotlighting chorizo and Spanish olives.

We followed our server’s advice and chose what he noted as the kitchen’s most popular, the Korean BBQ pie. The softly wood-scented crust proved pillowy, chewy and ample but not wildly noteworthy. It was loaded with tender, tasty pulls of beef short rib melded with creamy mozzarella, scallions and hints of sesame and soy in a chili vinaigrette, then heaped lasciviously, wildly, with mounds of arugula, fresh and peppy.

Delicious. But the best in the known world? No.

Then there’s dessert, and, as far as I’m concerned, one particular option is mandatory.

You want soft-serve ice cream? The fruit crisp? Fine. Go for it. But for me, it’s the Church Basement Cookie and Bar Plate ($7) that’s worth the drive. It features two each of buttery chocolate chippers, an uber-melty, dark and gooey chocolate bar the size of a domino and one with a cheesecake profile upon a crunchy cereal crust. Oh, and a glass of milk appears by magic at their side.

Perfect ending. Unless you’re not ready to call it a night: Then head outside and around the back to Joni’s speakeasy bar.

CORRECTION: The original version of this story misidentified the restaurant Hello Pizza.