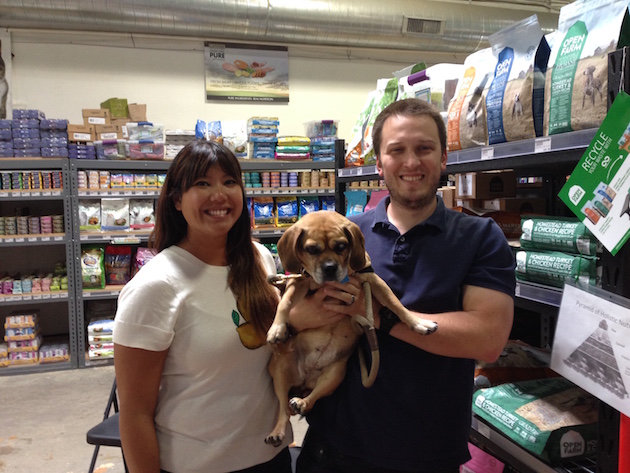 Minneapolis resident Marie Chaiart and her husband, Marlon Masanz, smile with their half beagle, half pug, Holly, on an August afternoon at Urban Tails Pet Supply. The couple adopted the terminally ill Holly through the Minneapolis nonprofit Pet Project Rescue, which operates a hospice-foster program. Photo by Nate Gotlieb

Marie Chaiart and her husband, Marlon Masanz, had fostered about a dozen dogs before February, most for short periods of time.

This February, the couple undertook their most ambitious foster project yet through Minneapolis nonprofit Pet Project Rescue

Chaiart and Masanz fostered a terminally ill half-beagle, half-pug mix they named Holly. Pet Project Rescue provided them with funds to cover Holly’s special food, medical supplies and vet visits, allowing them to care for her without worry.

“Even though she was sick, we still wanted to give her as much as we are capable of,” Chaiart said. “She just still had a lot of life to live.”

For about six years, Pet Project Rescue has been caring for terminally ill animals such as Holly, rescuing them from high-kill shelters and giving them comfortable final homes. The organization also specializes in spay/neuter programming locally and in Mexico.

It’s all part of an effort to help animals that other organizations can’t, founder and executive director Maia Rumpho said.

“(In) Minnesota, with the number of rescues we have, we can rescue every well-balanced, healthy animal,” she said. “It’s the ones that aren’t deemed traditionally adoptable that need the help, because that costs a lot more.”

Aggressive with spay and neuter

Rumpho already was involved in rescuing animals in Minnesota, but the genesis of Pet Project Rescue came about 10 years ago after she took a trip to Mexico. She said the poor conditions of street animals there inspired her to start the organization.

Rumpho said the nonprofit began as more of a traditional rescue but has evolved to place more emphasis on spay and neuter programs.

“If you aren’t really aggressive with spay and neuter, you can rescue until you’re blue in the face and you’re not going to change anything,” she said. “You’ll change it for those individual animals, which is important, but you’re not going change it as a whole.”

That led to a focus on feral cats in Minneapolis, Rumpho said, since there are fewer stray dogs. Pet Project Rescue helped pass a trap-neuter-return ordinance three years ago, which Rumpho said is more sustainable than euthanizing stray cats.

Volunteers, called colony caretakers, set traps for the feral cats and bring them into clinics to be spayed and neutered, vaccinated and microchipped. The caregivers also remove kittens from the colonies so they can be socialized to humans and adopted.

The organization has seen good results with trap-neuter-return, Rumpho said. It hasn’t seen a single kitten in six colonies in over two years. Pet Project Rescue has spayed and neutered more than 600 street cats in five years.

“We’re removing that very young generation that can be socialized to humans and finding them homes and then we’re stopping the cycle by spaying and neutering,” Rumpho said. “Everything is better for animals if you can get ahead of the overpopulation problem with spay and neuter.”

On the hospice side, Pet Project Rescue is fostering between five and 10 animals a year and is expanding. Its traditional rescue adopted out about 50 animals a year.

“We’re not keeping them alive just to keep them alive,” Rumpho said. “We want them to be pain-free. That’s very, very important in the hospice process.”

For Chaiart and Masanz, that’s meant working on getting Holly exercise, making sure she sleeps well and giving her a relaxing environment. The couple has rearranged their furniture to better suit her needs and said she has put on weight since they adopted her.

Chaiart and Masanz don’t know how much longer Holly, who is diabetic, nearly blind and has mammary cancer, will live. The couple said the experience has been worth it.

Their veterinarian hasn’t given Chaiart and Masanz a life expectancy for how long Holly will survive. The couple said it would be hard when she dies but they are glad to have adopted her.

“We don’t know how it’s going to affect us emotionally when it does happen,” Chaiart said. “But at the same time we’ll be happy to know that she was able to live in a home for the rest of her life.”

600 — Number of street cats the organization has spayed and neutered in five years.

6 — Number of feral cat colonies Pet Project Rescue has fully closed, meaning there has not been a single kitten in more than two years.

5 to 10 — Number of animals the organization adopts out each year through its hospice program.

$1,500 — Approximate cost of the hospice program per animal each year.

What you can do:

Volunteer in the trap-neuter-return program. The organization is looking for people to assist with trapping of approved colonies and to transport cats to spay/neuter appointments.

Volunteer as a feral cat overnight foster. Volunteers keep the cats in crates for one night pre- and post-surgery. They do not handle them.

Become a sustaining donor, attend one of the organization’s events such as its Sept. 18 Flea Market or adopt or foster a pet. You can find information about all opportunities at the Pet Project Rescue website.