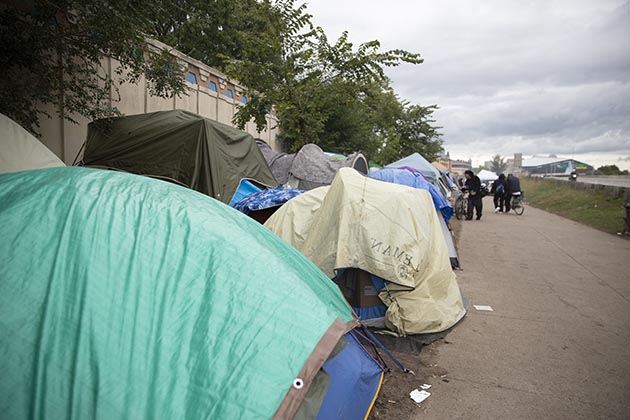 Also known as “The Wall of Forgotten Natives,” the encampment along Hiawatha Avenue has attracted hundreds of people experiencing homelessness since this summer. Photo courtesy Chris Juhn

Work on a temporary navigation center that will allow for the relocation of people living in a large encampment near Franklin & Hiawatha got underway in October.

The City Council on Oct. 16 approved $1.5 million for development of the navigation center, planned for a 1.25-acre site near the Franklin Avenue Metro Blue Line light rail station. Less than two weeks earlier, the Council declared an emergency, allowing it to move more quickly through the steps required to move and shelter the dozens of people at the encampment.

Modeled on similar facilities in cities like Seattle and San Francisco, the navigation center is meant to guide those experiencing homelessness into temporary shelter or supportive housing. It will be located on land owned by Red Lake Nation, which intends to develop the site into affordable housing next year, and the city.

Demolition of existing buildings on the site began less than a week after the council approved funding for the navigation center.

Speaking to the Housing Policy and Development Committee on Oct. 24, City Coordinator Nuria Rivera-Vandermyde said placement of families and individuals living at the encampment was “happening rapidly” even as work on the navigation center continued.

Rivera-Vandermyde said 18 families had been placed in shelters and another three families in supportive housing. Supportive housing beds for 17 individual adults had been secured. Several dozen others either had applications in for housing or were on wait lists.

Rivera-Vandermyde said the population of the camp, which had grown to several hundred people over the summer, had held steady in recent weeks.

The city was set to accept a $150,000 donation from the Pohlad Family Foundation that will be used to pay for a navigation center project manager. Recruited for the job was Margaret King, who previously worked as director of housing programs at Seattle’s Downtown Emergency Service Center.

If her contract is approved, King is expected to coordinate the efforts of a partnership that includes the city, state and Hennepin County as well as Red Lake Nation, Metropolitan Urban Indian Directors and Minneapolis nonprofits that work with the homeless.