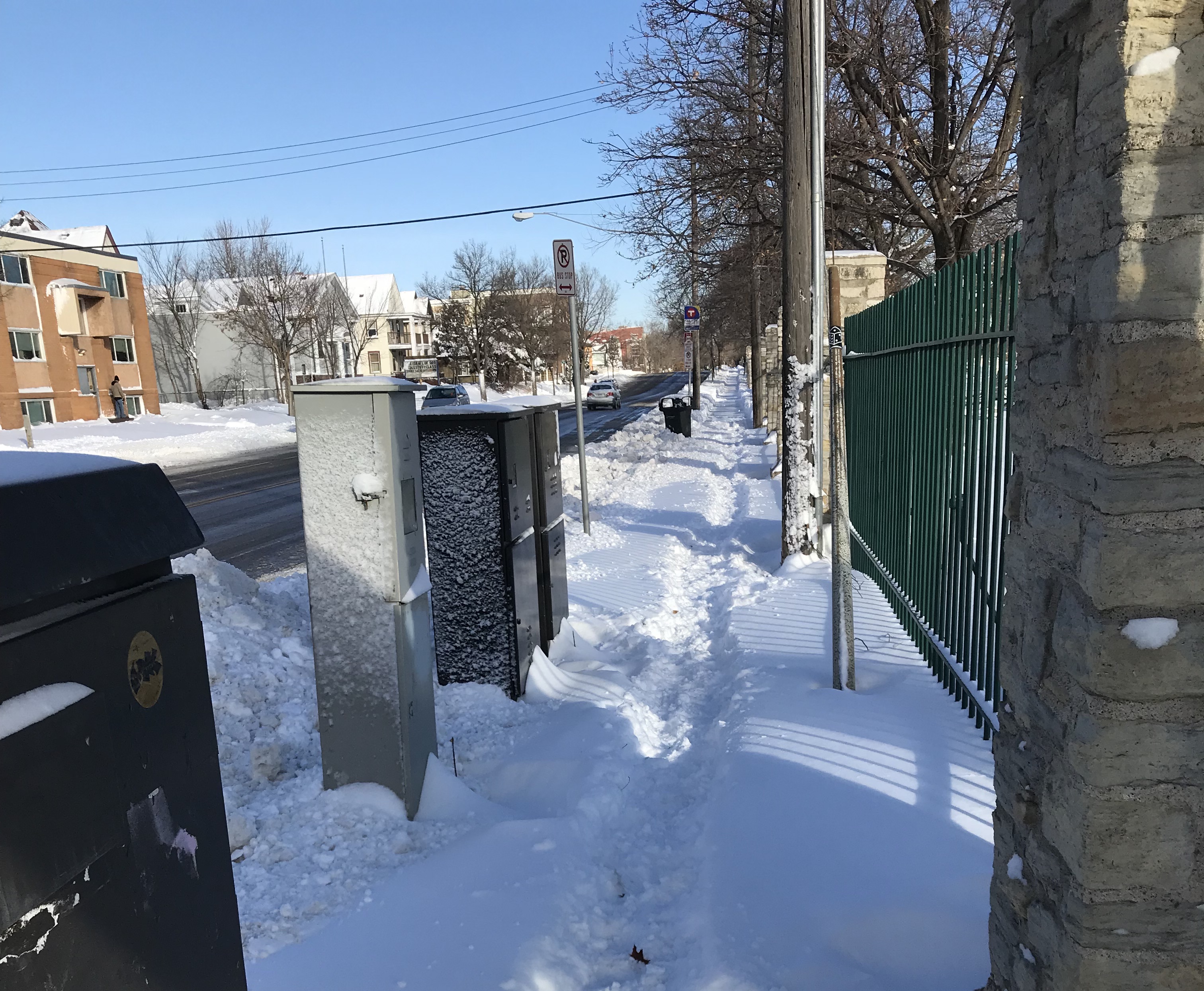 Snow and ice are melting away, but for many the challenges of getting around in the winter on icy sidewalks, snow-filled crossings and disappearing bike lanes remain a source of lingering concern and frustration.

“Lack of ice and snow clearance is so limiting for me and people like me who are blind or have other physical limitations,” said Scott Engel, a pedestrian advocate and executive coordinator of the CARAG neighborhood. “I don’t know how someone in a wheelchair gets through on many streets. You feel almost trapped in your home.”

That sentiment is echoed by Mary McGovern, president of the Minneapolis Highrise Representative Council.

“Many residents don’t go out much in the winter time because they are afraid of slipping and falling on ice or snow,” McGovern said. “For many elders that is especially concerning because a fall can mean a broken hip and an extended hospital stay. This leads to people being isolated in their apartments for the winter, which is concerning from many perspectives.”

Concerns about icy or snow-covered sidewalks are the top reason people call the city’s 311 service in most winter months. Last December (the last month data are available), there were more than 1,700 reports of problem sidewalks. Hundreds of other problem spots go unreported.

“Winter sidewalk snow clearance has always been among the top priorities of the Pedestrian Advisory Committee,” noted the committee’s chair, Julia Tabbut.

The committee adopted a six-page memo on winter maintenance in 2014 in which they asked for a number of improvements, and it was a focus of conversation at the committee’s annual report to the City Council last month.

There is active work on ways to make winter maintenance better.

“The City of Minneapolis is wrapping up a Winter Maintenance Study which will provide information and context related to current winter maintenance processes in Minneapolis as well as other winter climate cities,” said Jenifer Hager, director of Transportation Planning and Programming for the city. “The study will also identify next steps and actionable work tasks as the conversations regarding improvements to winter maintenance in Minneapolis continue.”

The long-awaited study leaves many advocates hopeful that improvements may be coming soon.

“I hope they come up with a plan that greatly increases the city’s role in clearing snow,” offered Engel.

McGovern said, “We’d love to see the city take up plowing the sidewalks more because now it is so hit and miss from property to property.”

The Pedestrian Advisory Committee’s Tabbut added: “We would love to see more pilots that explore creative solutions, possibly even including municipal clearance of priority corridors, and hope that the winter maintenance study will dream big and lead to changes that will finally allow the same consideration for those on foot as has long been assumed for those who choose to drive.”

The Marcy-Holmes Neighborhood Association recently raised the alarm on lack of snow clearance in bike lanes after a person was hit while biking on University Avenue Southeast.

Tweeting a photo of a snow-filled University Avenue bike lane, they added the comment: “This is the ‘bike lane’ where the bicyclist was struck by a minivan tonight. We need this fully plowed, and then, improved.”

“From what we’ve seen firsthand as recently as this past weekend, this isn’t a problem limited to the Marcy-Holmes neighborhood,” Marcy-Holmes Executive Director Chris Lautenschlager noted. “We’ve seen these terrible bike lane conditions from 8th Street Southeast to East 38th Street.”

While many bicycle supporters applaud the city’s clearance of trails and protected bike lanes, which have been generally rideable for most of the winter, unprotected bike lanes often become unusable after a snow or ice builds up against the curb. That forces people biking into traffic lanes, and fear of the extra interaction with cars and ice keeps many from venturing out on their bikes — even if they are willing to bundle up for the cold.

Bicycle boulevards, like Bryant Avenue in the Wedge, also are typically challenging. They are plowed a day or two after most snowstorms, and ruts can form that make them un-rideable.

“Our city works to implement our excellent complete streets policy to build and maintain facilities that support all users,” Mason said. “We need our bicycle network to work in all four seasons, as many who ride in Minneapolis need or choose to bicycle all year round.”

The city’s winter maintenance study will also include ways to improve bikeway maintenance. Some previous ideas have included creating a priority winter biking network, so that a core set of routes are maintained more consistently.

I’ve been told that staff hope to present the final Winter Maintenance Study in early May. That would provide time for significant potential improvements for next winter.

That would be very welcome for Engel.

“Winter sidewalk maintenance needs to be bumped up the priority list,” he said.