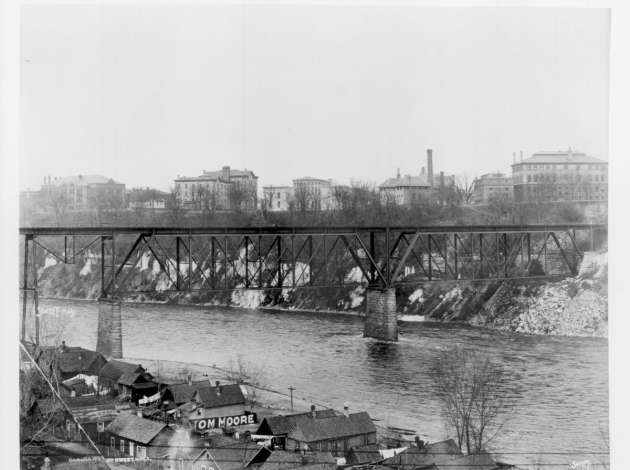 In the last quarter of the 19th century, when Minneapolis was in its infancy and housing was almost impossible to find  in the growing city, new Americans  created a squatters’ village on the banks of the Mississippi River. Home to 1,000 people, this enclave was tucked beneath the Washington Avenue bridge and was accessible by a flight of 79 wooden stairs descending from the top of the river bluff.

Though residents of the Bohemian Flats worked, shopped and worshipped above the bridge, outsiders imagined the community as a world apart, “a quaint little village nestled under the side of a cliff,” where migrants from Bohemia, Slovakia and Finland clung to European costumes and languages. This cheerful characterization overlooked the fact that the neighborhood was also the site of the city’s garbage dump. Each year it was inundated by spring floods that forced families to decamp for higher ground.

Yet living on the riverbank had its attractions, especially for new arrivals to Minneapolis. The enclave’s undeveloped setting made it possible to keep vegetable gardens and goats to supplement meager wages. Inhabitants also harvested scrap wood and other salvageable materials from the river. Rents were cheap. Over the lifetime of the neighborhood, many on the “Upper Levee” transformed their shanties into substantial homes that furnished by “pianos, Victrolas, Brussel carpets and lace curtains.”

No physical trace of the community is visible today. It was cleared in two waves — first in the 1920s and then the 1930s — to make way for a new municipal freight terminal. But this ghost neighborhood has been re-discovered in recent years as a new generation of Minneapolitans have embraced the Mississippi River. One of those responsible for making this legendary settlement visible to a new generation is Rachel Hines, a University of Minnesota graduate whose thesis on the Bohemian Flats provided the inspiration for a new exhibit that opens this month at the Mill City Museum.

This exhibit seeks to make sense of the dueling images of the neighborhood, which was portrayed both as a place of natural peace and a site of danger. The “Flats” were described as a riverine paradise at a bend of the Mississippi River. Even though these currents were heavy with sewage and industrial effluvia, some observers believed that the proximity of the river created an “atmosphere of peace and to some degree quiet” for residents of the Flats like Anna Chipka, who is pictured here. Women like Chipka, according to the neighborhood librarian, were distinguished by their “pink cheeks and brown skin” and “glowed with health and vigor.” 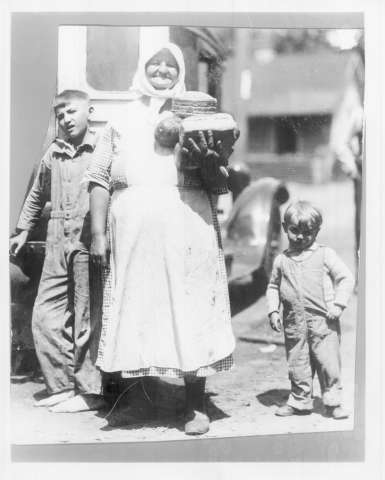 But the Flats also presented serious health hazards. For most of the neighborhood’s history, homes had no plumbing and took their drinking water from communal pumps, which were frequently contaminated by shared privies. The shanties closest to the river provided little protection from the elements. And the area was notorious for its crime, prompting Sunday school teachers from Westminster Church to demand a police escort before they would visit the riverbank shanties.

On June 4 and 25, Hines will be conducting walking tours of the former site of the Flats. Reserve tickets online through the Mill City Museum. No police escort will be necessary.