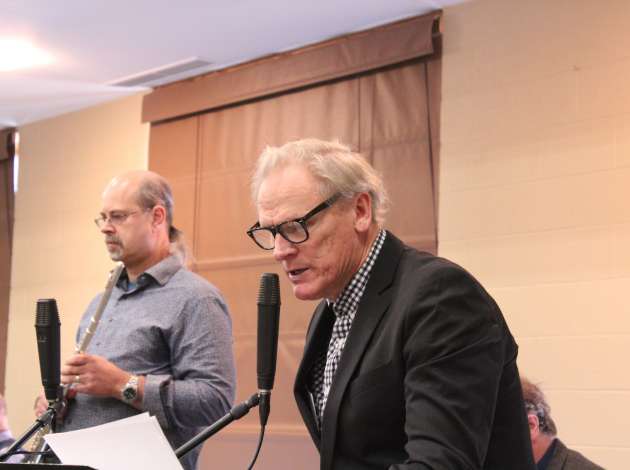 That chant of good tidings opens another episode of New Frontier Lutheran Radio Hour, beginning listeners’ gentle descent into historic Midtown, Minn. Don’t go looking near Lake & Chicago; this Midtown exists only in that mythical Minnesota of the radio, some indeterminate distance from Lake Wobegon.

On this Sunday before Thanksgiving, the congregation of Midtown’s New Frontier Lutheran Church is busying itself with preparations for Advent. The crew of ushers gathered in the church’s Great Fellowship Hall is squabbling humorously as they work out a new pecking order. And conducting this chorus of buoyant Minnesota accents is our host, Everett Erickson.

Erickson is the radio-land alter ego of Graydon Royce, a longtime reporter and theater critic for the Star Tribune. And New Frontier is Royce’s delicately drawn caricature of Minneapolis’ Diamond Lake Lutheran Church, where he and his family have been members since the 1980s.

“I find church and theater to be really close cousins, because they are both based on a ritual that is intended to bring people together and help you to meditate on what it is to be human and your spirit and all that,” he said. “So, if you can combine both of those, it’s like the great cocktail.”

Over five seasons, New Frontier Lutheran Radio Hour has become popular enough with Diamond Lake’s members — and many who don’t belong but show up for the live show or listen on iTunes — that the monthly performances have replaced a Sunday service at the church. Before November’s live recording, newcomers just arriving for that day’s show mingled with the crowd sipping coffee in the church foyer after morning services.

“If we get people into this building once a month, that is in a lot of cases one more time than they would have come,” Royce said. “… It’s the only way I get my kids here.”

Royce penned the first tales of the fictional New Frontier Lutheran Church in the mid-’90s, when he was recruited to write a column for The Bond, a magazine published by the Lutheran Brotherhood. But the column ended after a few years, and it would be a decade before Royce returned to fictional Midtown.

That visit was prompted by a conversation at a party with the Rev. Mark Orvick, senior pastor at Diamond Lake. Orvick remembered that it was in 2008 or 2009, around the time the Star Tribune was trimming staff with buyout offers.

“I jokingly said, ‘The future’s not looking good’ — kind of making light of the worry that all of them had — ‘and we should start a new type of worship,’” Orvick recalled.

A radio variety show wasn’t much of a stretch for Royce, who has written and produced several plays, including one that went off-Broadway. He’s also written the book and lyrics for many of Diamond Lake’s youth musicals.

Ever since its debut in 2011, New Frontier Lutheran Radio Hour has drawn the obvious comparisons to that other locally produced radio variety show set in a fictional Minnesota town. Royce calls “A Prairie Home Companion” the “gold standard,” but is careful to point out his cast and crew of amateurs, all drawn from church’s congregation, give the show an authenticity Garrison Keillor just can’t match.

“I will say we have real Lutherans on our show, and I feel strongly about that,” he said.

Kirk Gallup, an actor in the show, said Diamond Lake’s members enjoy the gentle ribbing they get in Royce’s scripts.

“If you are in our church, in the life of our church, you get the inside jokes,” Gallup said.

“We need to make fun of ourselves, as well,” Orvick added. “Worship is worship, but we need to laugh.”

In November, a crowd of about 120 filled rows of folding chairs set up in Diamond Lake’s Fellowship Hall, where colored light filtered through panes of stained glass. They chuckled through the sketches and Royce’s interview with that episode’s guest, Gustavus Adolphus College President Rebecca Bergman. The show closed, as usual, with Royce’s monologue; in character as Everett Erickson, he reflected on the meaning of Thanksgiving and the way holiday rituals remind us of the passage of time.

“As a pastor, I see that part as a sermon, if you will,” Orvick, who watched that day from a seat in the back row, said. “It’s his personal thoughts in a story, but it’s very powerful.

“That’s when I get to sit and listen.”

When: Monthly, Sept.–Nov. and Jan.–May. Next show is Jan. 3. To listen to past episodes, click here.