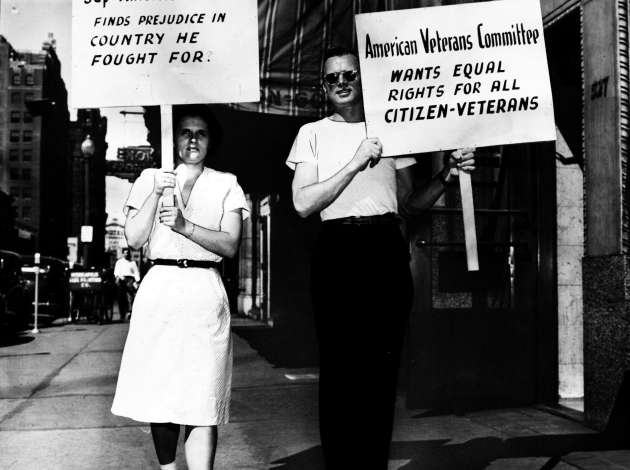 This image is from the Special Collections Department at Hennepin County Library. Thanks to Rita Yeada for working there to track down the photo and the newspaper clippings that provided the background for this story. Credit:

On a beautiful summer day in 1946, pickets appeared outside the offices of the Minneapolis Board of Realtors. The young protesters — who were newly returned veterans and students at the University of Minnesota — held signs demanding equal rights. Their goal was to make visible the racism that lay hidden in the property deeds of homeowners across the city.

The picketers were bringing home the war they had just finished. They demanded that Minneapolis embrace the new conceptions of race, community and democracy that had been forged during the fight against fascism.

Their demonstration was triggered by a case of discrimination against a veteran named Jon Matsuo. Matsuo was a Japanese-American veteran who had enrolled in the University of Minnesota after his discharge from the military. He and his wife Ruth had a young daughter and the couple was seeking a decent place to raise their child in the midst of an epic housing shortage.

Matsuo had been part of a group of former soldiers who had sought a cooperative solution to the housing crisis. Fifty veterans — including Matsuo — had organized Oak Hill Builders to build low-cost homes on a plot of 80 acres in Northeast Minneapolis. With the help of local real estate firm Dickinson and Gillespie, they sought to construct affordable homes in close proximity to the University.

The Matsuos’ dream of home ownership was deflated during their first meeting with the developer’s agent. They learned that Dickinson and Gillespie had attached a racial covenant to the new development. The family could not own a home in Oak Hill because of their Japanese ancestry.

The developer argued that this restriction was necessary to preserve the value of the new homes. Banks wouldn’t finance developments that might become racially mixed. This stemmed from the fact, according to developer Elliott Gillespie, that “the majority of purchasers do not want to live in an unrestricted area.”

In Minneapolis, most realtors had been using these kinds of legal restrictions since the 1910s, when they became part of an industry-wide effort to keep African-Americans from buying homes in white neighborhoods. The clauses were written to include a broad swath of humanity that included people of “Chinese, Japanese, Moorish, Turkish, Negro, Mongolian or African blood.”

Hundreds of African Americans had faced these real estate restrictions. But their cases never generated the kind of support given Matsuo, who won the backing of a new veterans’ group at the University of Minnesota. In 1946, the American Veterans Committee condemned  the practice of using legal clauses to restrict real estate purchases by race as “unnecessary, undemocratic and un-American” and organized a broad coalition of community groups that rallied to ban these covenants.

Gillespie dismissed the protesters as “a bunch of trouble-making, flag-waving communists.” The actions of one firm, he asserted, could not change the situation. They “will have to go to the real estate board, savings and loan associations, bankers associations and get an amendment in the federal constitution if they hope to abolish use of the restrictive covenants.”

In the wake of the Matsuo case, the city did change its municipal law to prohibit these types of covenants from being used in new developments. Two years later, the United States Supreme Court declared that states could not enforce racially based restrictive covenants. Jon Matsuo went on to become a community leader, serving as the first president of the United Citizens’ League, the first organization devoted to protecting the interests of the Japanese-American community in Minneapolis.