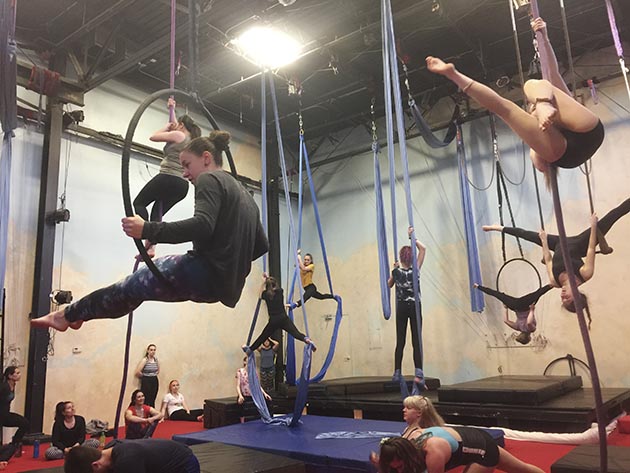 Thanks to a growing aerial arts community, locals are picking up skills typically reserved for the circus

Meg Elias-Emery looks on as a young student climbs three times her height up a silk rope to perform a star drop. She wraps herself in the fabric before extending out each limb, quickly twirling down and hanging in mid-air.

Elias-Emery has taught countless kids and adults the same maneuver, and many others, as the founder of Xelias Aerial Arts School, a nonprofit that serves more than 300 students in Northeast Minneapolis. As the circus arts family grows, more and more people of all ages are taking up flips, jumps and twirls of aerial arts and acrobatics. And, unlike Elias-Emery, most didn’t grow up in a family of circus performers.

“I have people who sit in an office all day and people who are Pilates or dance instructors. Everyone is here differently,” she said.

Elias-Emery founded Xelias more than a decade ago, borrowing the name of the school from an old circus performance troupe of hers, which combined her last name with the heroine of “Xena: Warrior Princess.”

Back then, the professional aerial arts performer was clad in a fur getup and performing around the world. Now she splits her time teaching kids as young as 4 at Xelias and working with young adults at the University of Minnesota to perform on trapeze, ropes, silks and hoops, also known as lyra.

Many of her students are kids looking for outlets beyond the traditional team sports. There are also adults who saw a Cirque du Soleil show and got the itch to try it out for themselves.

Circus arts have become a hobby, even a part-time or full-time job, for many. They learn their skills at the many studios scattered throughout downtown and Northeast Minneapolis.

“When I started circus, you had to be born into a circus family or have some sort of connection. … But there’s so much going on right now,” she said. “It is a very theatrical outlet for people.”

Cheryl Birch saw Cirque du Soleil when she was 12 and had to try it out. It started with contortion and a workshop at Circus Juventas, a youth performance school in St. Paul, and, since then, she’s learned circus arts and new practices like aerial yoga that combine fitness and performance art.

Birch is now an instructor at Northeast’s Dollhouse Pole Dance Studio and Rabbit Hole Studios, a performance art space run by the Minneapolis Performing Arts Cooperative. She’s developed her own personal brand while making a living between teaching, personal training and performing at private events, nightclubs and shows.

“A nightclub is really cool to begin with, [but] if you’ve got people breathing fire or flying around in the air, that’s even cooler,” she said. “It makes something more high-end. It’s like ‘Ooh, we’re in Vegas.”

If would-be circus performers don’t get attracted to aerial arts while seeing a show, there are several studios in Northeast Minneapolis that draw them in through a good workout.

At the Aviary, Christine Longe’s aerial fitness gyms in Marcy-Holmes and Minnetonka, patrons use silk hammocks attached to the ceiling to build strength. Longe, a student at Xelias almost a decade ago, said their fitness program attracts people who are looking to try something beyond what’s available in the typical fitness studio. They primarily focus on the workout, but the Aviary has workshops to introduce people to silks and a rare program focused on bungee, a form of acrobatics that has been gaining in popularity in the past two years.

While on the fringe of the local aerial arts community, Longe said the Aviary’s patrons have gone on to practice at other studios.

“I’ve actually seen some of my own students at Xelias, so I know it’s happening,” she said. “It’s always fun to see people catch the itch.”

From fitness to circus

Even hobbyist aerial performers have venues to perform in Northeast Minneapolis.

Jac Fatale is the owner of both ExperTease Fitness and Minnsky Theatre, which combined create a school and a stage for locals to learn circus and vaudeville skills and immediately perform them for an audience in as little as eight weeks. Her Near North-based, 18-plus school, which she plans to move next March to the Thorp Building on Central Avenue Northeast, teaches roughly 250–300 students in things like belly dancing, trapeze, lyra and burlesque.

Northeast was a natural choice for her to open the two businesses, she said, because of the high ceilings necessary for circus performances. Having their own vaudeville stage gives students a chance to put the performance in performance art.

“Who wants to learn to fly on a trapeze and not show everybody?” she said. “There’s something unbelievably fun about running away to the circus.”

In recent years, she said the local circus community has opened to a new tier of performer: the amateur. A large number of her students are people who don’t take up high-flying skills or acrobatic maneuvers until well into adulthood. From a fitness or dance class, “it’s a surprisingly short hop, skip and jump to go to circus,” Fatale said.

“Some people take it one time and they feel great about themselves and some people stay with it. We have students who are in their seventh year with us,” she said.

Though there’s a concentration of studios and places to perform in downtown and Northeast Minneapolis, Birch said there isn’t competition among them. Birch said she describes her relationship with other performers as a sisterhood, though the women-dominated industry is open to all genders, because each student, instructor or performer takes a risk in flipping, tumbling and putting themselves into the art.

“I wouldn’t be so attached if there wasn’t such a community,” she said. “You don’t really see it anywhere else.”