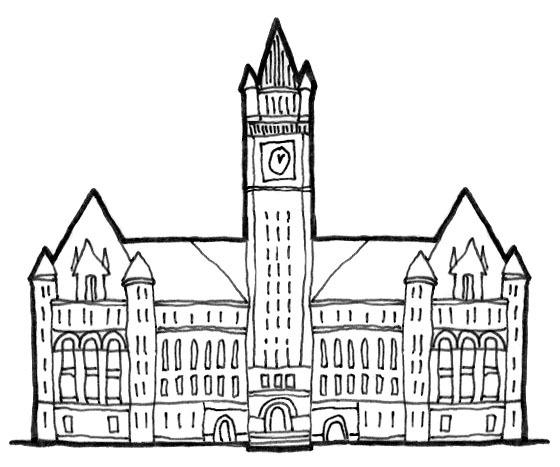 Early Lunchtime Tourist columns were illustrated with line drawings such as these.

I was in elementary school when Skyway News first appeared on news racks in 1970.

Later, in high school, my best friend Marta and I often hung out at the glitzy new IDS Center Crystal Court. We rode the bus from Golden Valley. Suburbia felt far away when we set foot on the corner of 6th & Hennepin.

After browsing through magazines at Shinder’s, we’d hurry on the sidewalk past Moby Dick’s bar, then cut through Dayton’s Arcade on the way to the department store’s sixth-floor Art Deco women’s restroom.

The IDS Center was, and still is, the epicenter of Minneapolis. Hanging out on the second floor and watching people below was a favorite pastime. We shopped the stores on both levels, had sodas at Woolworth’s downstairs coffee shop then headed into building’s basement movie theater.

After the matinee, we’d explore Nicollet’s retail establishments. Large elaborate window displays offered shoes, clothes and art and office supplies. Waiting for the bus, we’d pick up copies of Sweet Potato and Skyway News to read on the way home.

When I graduated college and moved west for a couple years, my father got me a subscription to Skyway News. I moved back a few years later and pitched the Lunchtime Tourist idea to the paper. I said I’d write about art, architecture and cultural curiosities and recommend a place for lunch.

For nearly 18 years I’ve been exploring and documenting downtown — the streets, buildings, alleys, rooftops, artworks and skyways. Eventually the paper was renamed Downtown Journal and then, later, The Journal, and my column became the Weekend Tourist when it was included in the paper’s sister publication, the Southwest Journal.

When my 200th column was published several years ago, I wrote that beauty and inspiration are everywhere — it just takes time to look, and it takes curiosity. And without curiosity life would be dull.

I’m still on the lookout for interesting places, but I’m sorry to lose all those other stories that enlivened our days reading Skyway News and The Journal.

LUNCH TIP: In the 1960s and ’70s my great aunt Evelyn took the bus downtown to pay her gas bill. She’d go on Wednesdays when Peter’s Grill had a special on apple pie. Sitting in those old wooden booths is nearly the same since Hen House Eatery took over the Art Deco space. Save room for an Apple Pie Bar.