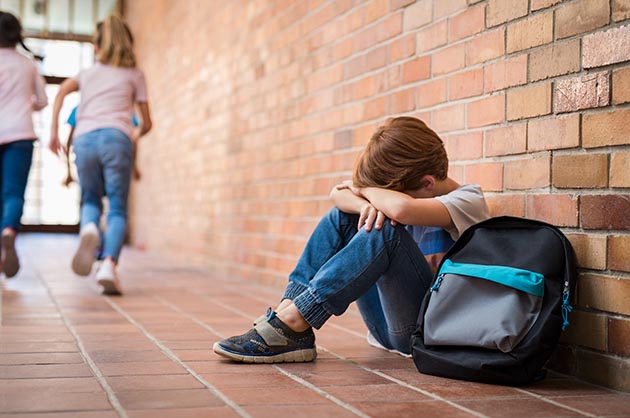 I have two kids who’ve just gone back to school. My oldest is starting 6th grade at the same school he went to last year, with the same group of kids. Toward the end of last year he started to complain about other students being mean to him. I’ve heard a lot about bullying and want to make sure this isn’t what’s happening. Any ideas on what can I say or do to help him?

We all know what bullying looks like (one need look no further than our current political system), but it’s important to distinguish it from garden variety teasing or being picked on.

Bullying has been defined as a distinctive pattern of harming and humiliating someone, specifically a person who’s in some way more vulnerable than the bully. Rather than occasional aggression, bullying is a deliberate and repeated attempt to cause harm to others who have less power.

The prevalence of handheld devices means cyberbulling is on the rise. To make matters worse, these bullies can reach out to their victims 24-7, and the harassment is more anonymous.

This should help you determine if he’s actually being bullied or facing some of the inevitable rotten behavior that kids give and receive as they figure out how to navigate relationships.

Either way, the time is now to encourage your son to share his feelings with you and for you to trust him and listen to his perspective so he can feel heard and acknowledged.

After all, the journal Psychological Science(Volume 24, Issue 10, 2013) suggests there may be long-term physical, psychological and economic effects from being bullied as a child. These include adults with less education, more health issues and lower income compared to adults who were not bullied as kids.

The researchers also found that bullies themselves were more likely to engage in criminal or risky behavior later as adults. These outcomes are not inevitable; there are many ways to prevent them, especially given you’re catching this in the early stages.

As a parent it can be heartbreaking to learn that your child isn’t being treated kindly by other kids. You might feel powerless, much in the same way your son feels powerless to the kids hurting him. Bullying is very much about power and domination.

Rather than teach your son to fight power with more power by physically fighting back, educate him on how to use his voice and stand up for himself verbally.

This is the perfect opportunity for him to learn assertiveness skills. Encourage your child to be open and expressive about his feelings and what’s happened, making sure to not blame the victim.

Your son could also respond to the treatment by laughing at the bully and walking away. Suggest he find an adult nearby who can protect him.

In general, have him stay near other adults and kids to have a buffer. Help him reduce stress and isolation and build community by joining a club, sport or creative hobby. This also gives him a monitored way to play with other kinds and learn how to resolve problems on his own.

All that being said, your son might not even be getting officially bullied, so sit down with him regularly and encourage him to share his experiences.

No one should have tosuffer in silence, and that includes you. Contact the teachers and school administration for details on their anti-bullying curriculum, and ask if a particular faculty member is in charge of education, prevention and intervention.