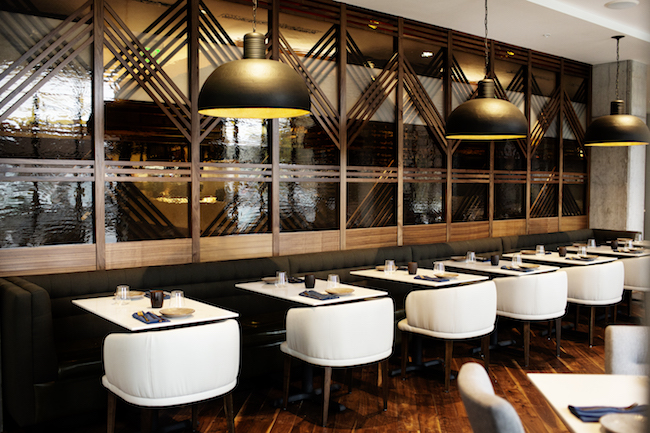 A funny thing happened on the way to the forum.

That’s the name of a legendary Sondheim musical, and it’s also what occurred when we tried for a rez at the (once again) newly opened downtown café formerly called The Forum. Maybe they could seat us sometime in 2019.

Meanwhile, we learned of another downtown restaurant debut and scored a table there instead.

The stylish, brand-new Elliot Park Hotel is home to Tavola — Italian for “table” — with plenty of those gleaming white marble-like surfaces ready to welcome hungry diners. Outfitted with wood flooring, lots of glass and soft gray touches, from upholstery to gauzy drapes, the room provides a pleasantly spare design statement.

And note that it’s quiet enough for conversations (answering my readers’ most frequent question) — including those with chef Aaron Uban, patrolling the room in his ball cap from Finnegans Brew Co., which adjoins the site. He’s a vet of kitchens including Heartland, Strip Club and the Italian number that occupied Calhoun Square following Figlio. 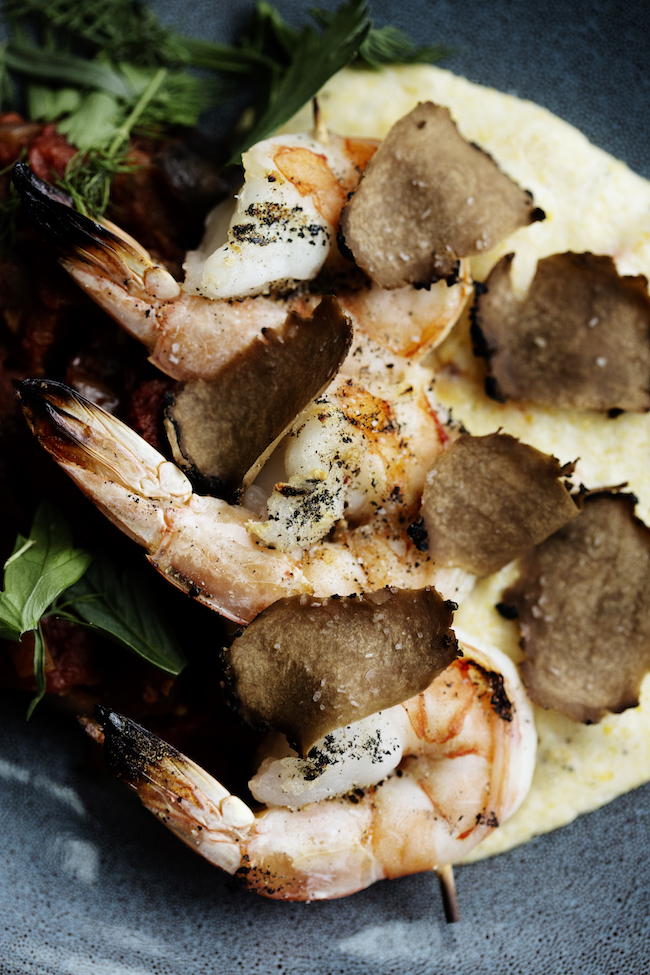 Here, he’s got a wood-fired oven at his disposal, from which come camera-ready pizzas (untasted but ogled) and our starter, a trio of plump, bouncy shrimp, sweet and lightly smoky, lounging on a bed of caponata favoring tasty eggplant, tomato and olives, along with a side of deliciously corn-y polenta. Nice palette of contrasting textures, colors and tastes.

A second starter (apps are $10–$17 and shareable), tortelli alla lastra, was built of beguilingly robust ravioli squares bundling bits of spinach and sauced with a walnut pesto — rich indeed, and a preview of coming attractions, or at least style of saucing.

Soups ($7–$10) range from tomato-basil to full-on panzanella, which sounds made for a Minnesota winter. (We got a preview of its main ingredient, thanks to the complimentary bread, the soup’s mainstay, brought forth at the start of the meal, along with a glug of easygoing and delicious olive oil.)

Then, bring on the pasta (available in two sizes, $8–$12/$13–$19). The winner was the cinghiale pappardelle — wide, house-made, toothsome noodles robustly sauced with wild boar, mushrooms, bits of chicory, a touch of oregano and fennel pollen (the flavor of which got lost in the shuffle) along with Aleppo peppers, also hard to discern. Oh, and lemon. Heartwarming. 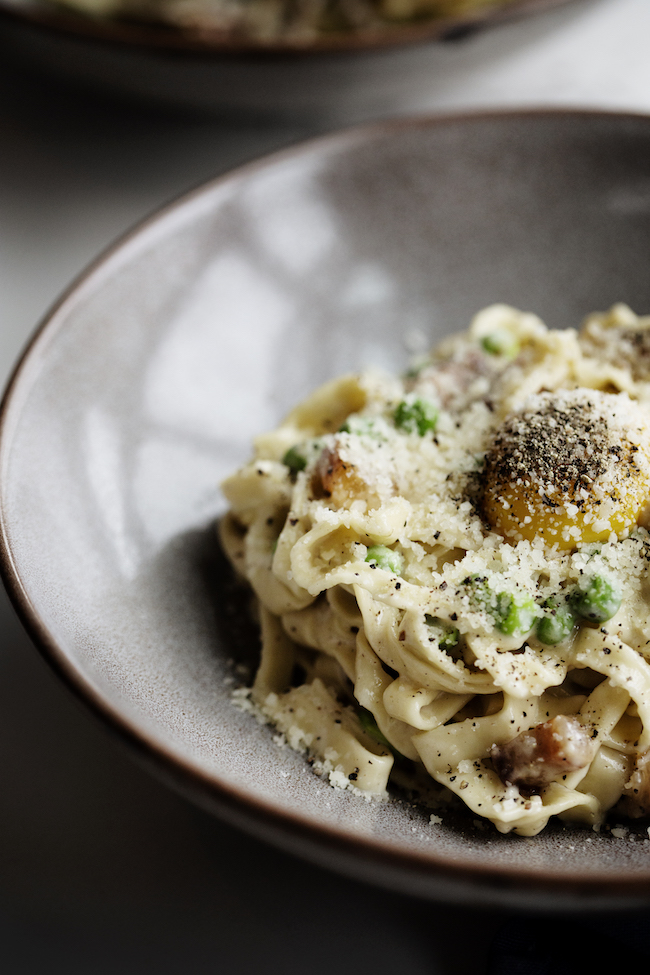 The fettucine carbonara arrived topped with a runny egg yolk, begging to be pierced to sauce the dish (nice, authentic touch), along with peas (not so authentic, but who cares) and long-overcooked, rock-hard bits of guanciale, a porky stand-in for pancetta. You know you’re in for a rich, fatty dish when you order this favorite, but this kitchen’s version is over the top.

More boar in the risotto — buddying this time with oxtail, along with mussels. The shellfish proved fresh and carefully timed, yet one has to wonder: why? (Unless you’ve been to Portugal, where pork-and-mussels surf ’n’ turf combos rule.) The rice itself boasted abundant chewiness (bravo), along with dots of chicory and abbiocco. (What’s that, I had to ask. “Love,” our server decoded.)

The popping noise that perhaps awakened hotel guests was our belt buckles bursting, yet we longed to sample the entrée called Cognosco i Meie Polli. If a chef brags, “I know my chicken,” we’ll take him on!

Actually, it’s delicious, from uber-crispy skin to the juicy meat it harbors, cozying a stuffing of ricotta and spinach. It’s plated with a savory walnut pesto and sweet tomato, along with wood-roasted fingerlings and parsnips, dry and overcooked. Good concept, but begs for more careful timing on those spuds. 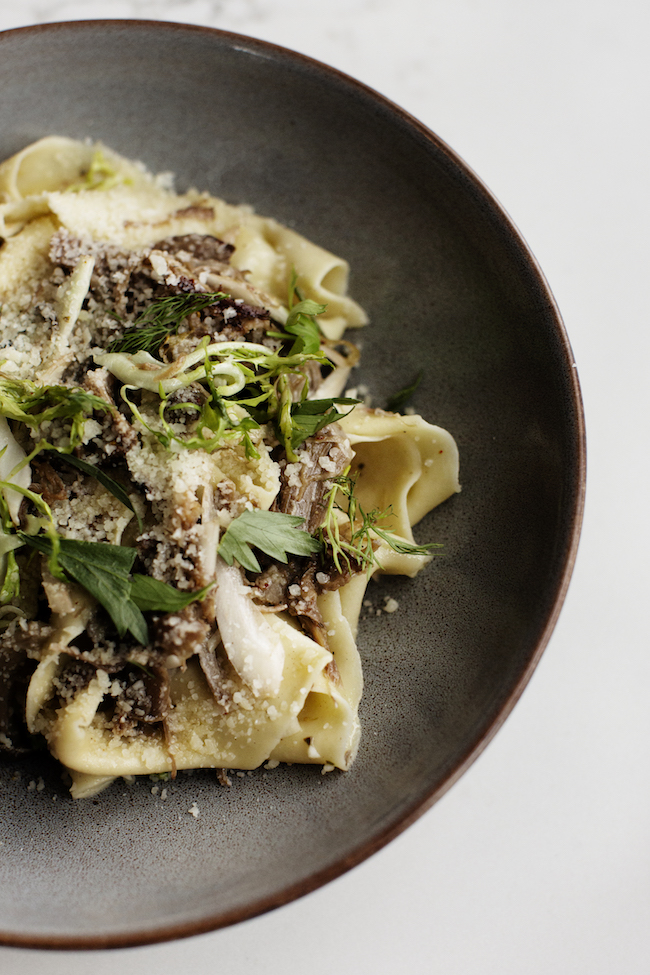 Next time, among the entrees ($21 for salmon to $42 for New York strip), it’ll be Il Macchina, the chef’s take on porchetta, served with lentils, kale and grilled lemon. Instead, we grabbed the dessert menu ($3 for gelato to $14 for Tuscan canucci: cookies to dip into Vin Santa, that sweet, syrupy dessert wine).

We opted for a medley of mini-tarts: fig, lemon and custard. The fillings, and their variety, were fine, but the proportion wasn’t: We’re eating more dry, boring pastry shell than filling in these coin-size treats.

Next time: affogato, that solution to the coffee or dessert question, where the answer is simply, “yes.”

Tavola’s mostly-Italian selection of wines by bottle or glass is well suited to the menu; craft brews (including Finnegan’s stout), cocktails — traditional to unique — and shrubs on offer, too.

We got in on the ground floor here, and what fun. I have the feeling that tweaks will be made to elevate the experience even more.