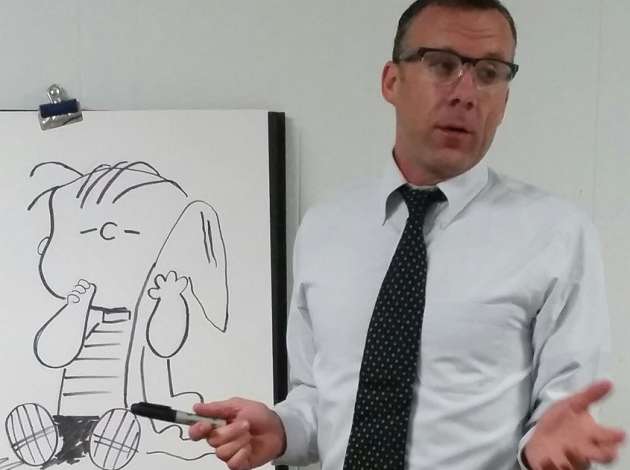 THE WEDGE — You might remember Brad Erickson from “Hamluke,” the Shakespeare-“Star Wars” mash-up that debuted at the 2011 Minnesota Fringe Festival, or perhaps “A Very Die Hard Christmas,” the popular parody returning this December for another holiday run at Bryant-Lake Bowl.

Or you may be thinking, “Didn’t he play Abe Lincoln?” — and you’d be right, but you’d also give yourself away as an under-13-year-old (or a school teacher). In his day job, the local actor and playwright dons presidential drag to perform an abridged version of Lincoln’s biography for school assemblies across the Twin Cities.

A couple of years ago, Erickson added another role to his repertoire: Charles Schulz, local boy done very, very good, as in one the most beloved and successful cartoonists in the history of the medium. And now he’s bringing his portrayal of the “Peanuts” creator to the stage of Bryant-Lake Bowl, where he can play to a wider audience than just the local K–8 crowd.

Certainly 20th Century Fox, which released “The Peanuts Movie” Nov. 6, is betting Charlie Brown, Lucy Van Pelt, Snoopy and the rest of the gang still resonate with audiences more than 15 years after Schulz’s death. Erickson can confirm they do, especially in Schulz’s native Twin Cities.

“Going to these schools, inevitably you’ll run into teachers who say, ‘Oh, my mom knew Schulz’ or, ‘My best friend’s mom was Donna Mae (Johnson), who was the inspiration for the Little Red-Haired Girl,” Erickson said.

Known as Sparky to friends and family, Schulz was born in Minneapolis in November 1922. When he was four, the family moved to St. Paul, where — in a biographical detail he’d later lend to Charlie Brown — father Carl Schulz ran a barbershop. It was here Schulz launched his cartooning career, selling strips and panel cartoons to the Minneapolis Tribune and St. Paul Pioneer Press before earning a syndication deal for “Peanuts” in 1950.

But as a child, Erickson said, “(Schulz) was shy, he was quiet, he loved to draw and he didn’t always feel like he belonged.”

Kids get that feeling, and adults never forget it, which is why “Peanuts” endures. It’s a strip whose sweetness shown more brightly because of the darkness at its edges.

Charlie Brown is the eternal loser, always whiffing when Lucy pulls away the football. But Schulz’s real-life accomplishments were better than splitting the goalposts at 100 yards, and in that there’s a lesson for us all.

The Life of Charles Schulz

A painting by Donna Bruni, one of five local painters featured in “Abstraction in Minneapolis.” Submitted image

THE WEDGE — It was time to do something abstract, Douglas Flanders said.

Without much more concern for rhyme or reason than that, Flanders has filled his eponymous Lake Street gallery with abstract paintings by five artists who range in age from their late-20s to their 70s. If there’s an organizing principal, it’s that they all live in Minneapolis.

Drawing the gaze to the far end of the room are two of Samuel Bjorgum’s large dot paintings, confetti-like explosions of multicolored dots. In the contrast between sharp-edged circles and fuzzier blots, the paintings recall Hubble images of star nurseries in deep space or maybe, going micro instead of macro, the invisible churn of quantum particles blinking in and out of existence.

Donna Bruni’s atmospheric paintings have a smooth surface that becomes rough where broad swaths of color meet and begin to mingle. Those planes of color can suggest landscapes or, in “Fragments of a Dream,” the morning sun chasing away the memory of last night’s visions.

In James Wrayge’s restrained paintings, lines hint at architectural spaces or, in “Space Place,” the demarcation of desert and ocean and of the hazy blue of our planet’s atmosphere and the intense black of outer space.

The gestural brush strokes in George Farrah’s paintings can drift apart or condense together; this is the difference between “Down to Lake Huron Beach,” where the white of the primed canvas shines through like the mid-summer sun, and “Vic’s Cabin,” which infers human figures in a snug, warmly lit interior space.

Josh Meillier, a recent Minneapolis College of Art and Design graduate, is the youngest painter in the show and proves it in searchingly experimental mixed-media works. Meillier’s paintings incorporate vibrant color contrasts and a variety of textures created with tape, cut paper and wormy gobs of paint.