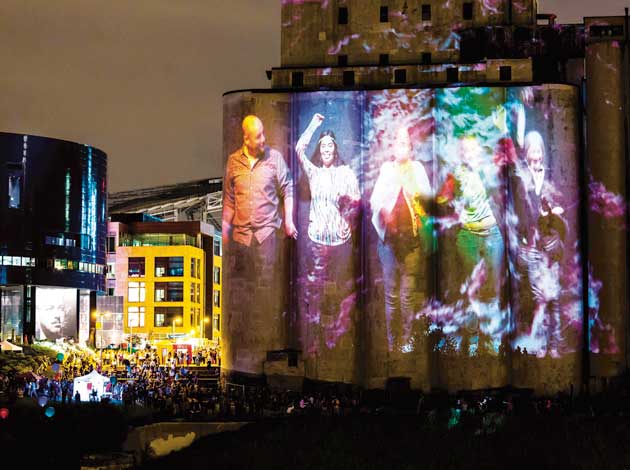 A scene from the 2015 Northern Spark on the riverfront. Photo by Ian Plant

Northern Spark is a rain-or-shine event, and in 2014 Minneapolis’ annual all-night art festival got rain — and not just rain, but an hours-long, cats-and-dogs plus tree-toppling wind deluge.

June 2014 was the single wettest month in Minnesota history, and the rainiest June the Twin Cities had seen since 1874. Back then, Uptown was still the undeveloped countryside.

Long after the final drops were rung from the sky, Steve Dietz, the festival’s artistic director, was still thinking about that night of rain. But Dietz was thinking about it in the context of a warming planet, one in which extreme weather events of all kinds — not just heavy rain and floods, but fires and droughts — are occurring with greater frequency.

“That (night) really just drove home the fact of the variability in the intensity of weather, which is one of the side effects of climate change,” he said.

Dietz and the rest of the festival’s organizers were inspired to dedicate the next two Northern Sparks to the issue of climate change. Dubbed “Climate Chaos | Climate Rising,” the project kicks off June 11 with this year’s all-nighter and concludes with what is planned to be the biggest Northern Spark ever on June 10, 2017.

It’s a topic bigger than two nights of dusk-to-dawn art can contain, so Northern Spark is breaking the mold. Many of the projects that kick off this June will continue throughout the next year through ongoing art and citizen science programs, a dinner series and several “minisparks,” Dietz said.

In 2017, Northern Spark will follow the Metro Transit Green Line path between Minneapolis and St. Paul, but this year the festival is concentrated in just two locations: the riverfront area near Mill Ruins Park and the Minneapolis Convention Center. Almost all of the projects (with the exception of a few projects booked before the theme emerged) use art to engage the tens of thousands of festival-goers in thinking about a changing climate.

In December, artist Olafur Eliasson and geologist Minik Rosing harvested 12 chunks of iceberg from a Greenland fjord and transported them to Paris, where the United Nations was hosting a climate change conference. As world leaders negotiated to limit global warming to less than 2 degrees Celsius above pre-industrial levels, the massive ice blocks, arrayed in the shape of a watch dial, melted in a public square.

Eliasson and Rosing’s message was muddied, though, when questions were raised about the emissions required to pull off the project — which an environmental charity calculated to be approximately 30 tons of carbon dioxide. “Phase Change” should avoid the criticisms that dogged “Ice Watch Paris,” since the six tons of ice harvested for the Northern Spark installation travelled no further than Lake Calhoun to the Minneapolis riverfront, where they’re waiting out the spring heat in an insulated enclosure.

“Phase Change” is a project of Futures North, a group comprised of two architects and two conceptual artists. Team member Molly Reichert said they were searching for a way to not just visualize the effects of climate change, but to allow people to feel it.

Once the ice is arranged in a sculptural installation for Northern Spark, Reichert and Futures North plan to aim 30 heat lamps at the wall. The lamps will be programmed with climate change data, so that portions of the installation melt at different rates representing different climate change scenarios — from best-case to our current trajectory, which climate scientists say could melt enough polar ice to swamp many of the planet’s coastal cities by the end of this century.

Reichert said another inspiration for the project was her friendship with environmentalist and polar explorer Will Steger, who harvests ice near his home in the North Woods and uses it to cool his root cellar year round. Youth from the nonprofit Climate Generation: A Will Steger Legacy will be on hand to talk with visitors and help interpret the ice installation.

Can melting 12,000 pounds of ice to make a point about climate change actually make a difference? Can any art, for that matter?

“This question is so interesting to me because we had this discussion in my class over and over again,” said Christine Baeumler, a member of the art department faculty at the University of Minnesota. This year, Baeumler partnered with colleagues from the science department to teach an interdisciplinary course on climate change and art that was part of the university’s new Grand Challenge Curriculum.

“I never say that art alone can change the world, but very few things on their own have changed the world,” she said. “This is my theory of change: It’s about these different ways of knowing coming together and inspiring people to make change.”

The course’s blending of art and science spawned two Northern Spark projects, including “Backyard Phrenology.” This year’s festival is really just the start of what Baeumler said would be a year-long citizen science project, which will come to fruition for Northern Spark 2017.

“Phrenology is the cycles and patterns in nature, and it relates to when buds burst or birds migrate, and a lot of those patterns are linked to the climate, of course,” Baeumler said.

As climate changes, those patterns can shift, which makes phrenology of particular interest in an era of climate instability. Paying attention those changes in your own backyard is one way to gain a deeper understanding of how climate change is reshaping the planet.

The Northern Spark project developed by students from Baeumler’s class also invites participants to think not just about how climate change affects them on a personal level, but how each individual contributes to climate change. “Surrender: What are We Willing to Lose?” challenges visitors to contemplate those tradeoffs and measure their personal stake in combatting global warming.

Art alone won’t solve this global crisis, but in her optimistic moments, Baeumler said, she believes it can spark change.

“Art is a catalyst, in a sense, for greater awareness and consciousness,” she said.

IF YOU GO: Northern Spark

Where: In and around Mill Ruins Park and the Minneapolis Convention Center