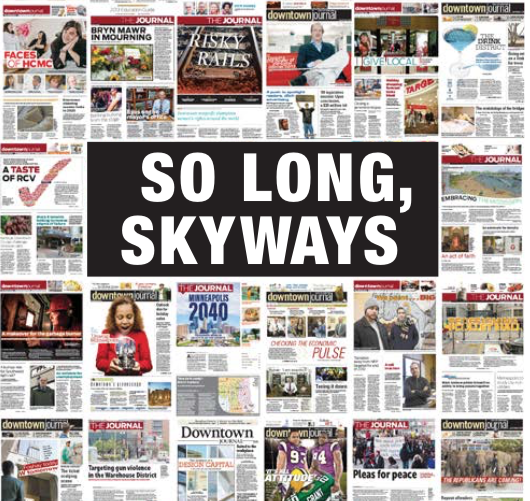 It’s never easy to say goodbye, but it feels odd to be putting this publication to rest.

Terry Gahan and I bought Skyway News in 2001. It had been around for 30 years, serving people who worked in downtown Minneapolis. It wasn’t really a newspaper, but it offered news briefs, entertainment and updates on office tower construction and light rail development.

We put out our first issue on Sept. 10, 2001. The world changed the next day, and here at home we ran a story about people returning to work in the IDS Center.

Over the next several years, downtown boomed as buyers lined up to get into new condominiums. Our readership and revenue were way up. The numbers of residents living downtown passed the 30,000 mark in 2006, which no one had seen coming. On Aug. 1, 2007, our newsroom emptied out as our reporters ran to cover the Interstate 35W bridge collapse.

We renamed the paper the Downtown Journal in 2005, aligning it with the reputation we had built for news coverage with Southwest Journal. (It became The Journal in 2010 when coverage expanded to include Northeast neighborhoods.) We focused on news to serve downtown residents, covering City Hall, light rail, Block E, grocery store plans, the new Twins and Vikings stadiums, Hennepin Avenue theaters and reclaiming the riverfront.

After the crash of 2008, we saw a marked decline in advertising sales. We made cuts to keep going, but the writing has been on the wall for a few years now. The Journal isn’t what downtown residents are looking for. Perhaps another publisher will step in with a new product.

I wish I could thank each and every staff member we’ve worked with over the years. The editors, reporters, freelancers, designers, ad salespeople, distribution staff, managers — everyone. We couldn’t have done it without you. Your efforts in creating a newspaper we could all be proud of are not forgotten. Thank you.

Thank you to the readers of this publication. You’ve turned downtown into a neighborhood, now home to over 40,000 residents. It’s been an honor to provide you with news and entertainment coverage these past 18 years.

Thank you to all of our advertisers. Your commitment allowed us to serve our audience. It’s the best kind of partnership and we are grateful for your confidence and support.

As for us, we’re still putting out Southwest Journal, as we have since 1990. Long may it run.