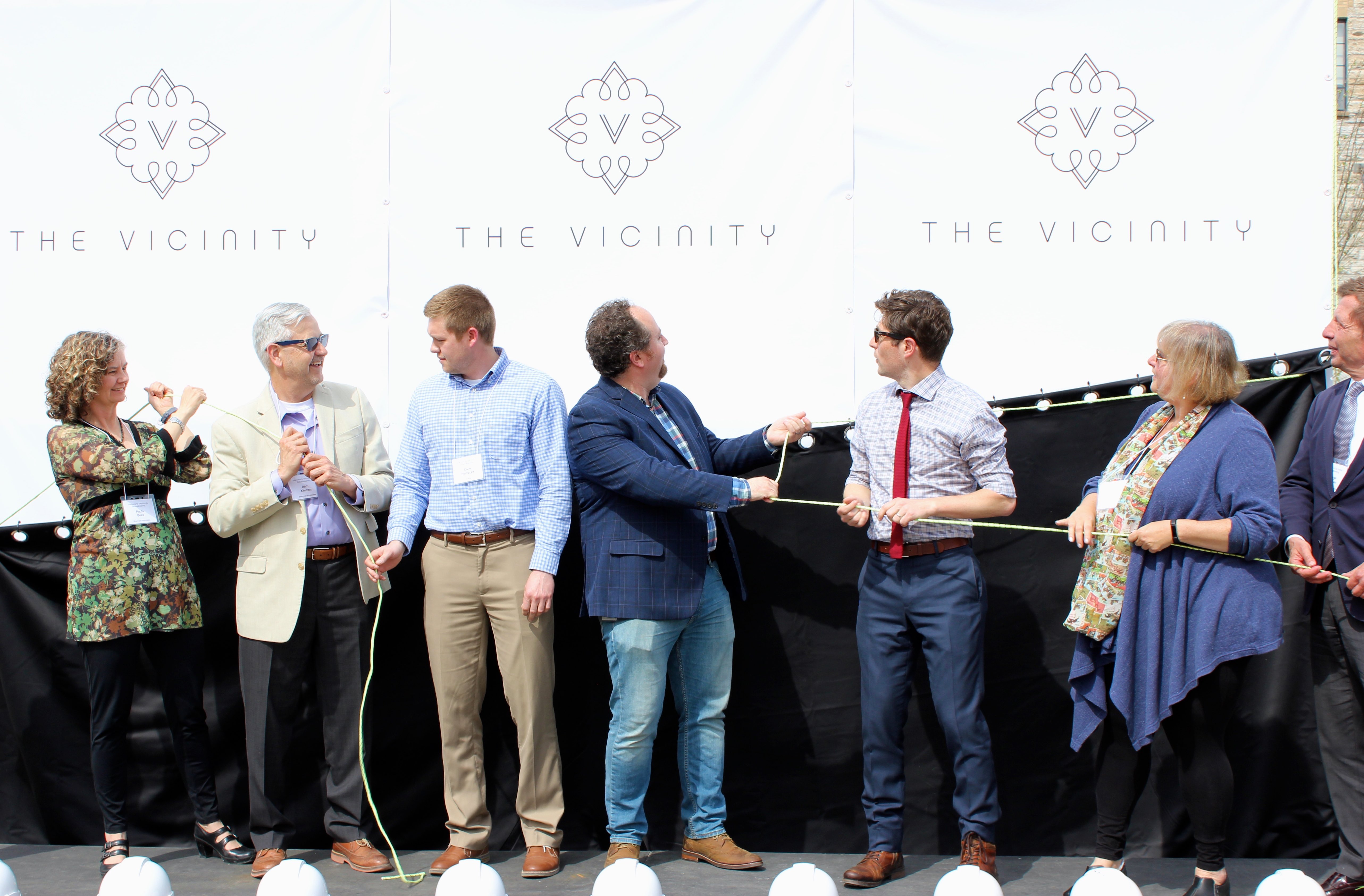 The latest housing project to break ground in the Mill District features a mix of market-rate apartments, affordable housing and for-sale townhomes.

Sherman Associates recently celebrated the start of construction on the Vicinity, a six-story mixed-income apartment building going up on a formerly city-owned parcel at Park & Washington. The 122-unit project will bring 118 apartments, 20 percent of which will be affordable at 60 percent of area median income, and four owner-occupied townhomes to a long-vacant site.

Principal George Sherman said developers should be having conversations about mixed-income housing across downtown.

“We also believe in affordable housing and inclusionary housing, and think it has to be part of the development discussion that goes on with all the remaining parcels of downtown Minneapolis. Whether it’s part of the same building or part of the block, we need to incorporate housing for all Minneapolis residents in downtown,” he said.

Once complete around August 2019, Vicinity will have a café-bakery and a restaurant from local restaurateur Kim Bartmann (Bryant Lake Bowl, Pat’s Tap, Red Stag Supperclub, etc.), along with a police substation. The building will have two levels of underground parking.

Mayor Jacob Frey, who began working on the project while on the City Council, said Vicinity should be an example for projects in other areas, especially for middle- and upper-income neighborhoods.

“I think every council member has their opportunity to cut their teeth on a certain project and, for me, 205 Park was most definitely that project. This was not an easy one to get done,” he said. “I think that this was kind of like my bar mitzvah as a council member.”

Ward 7 Council Member Lisa Goodman said she asked Sherman Associates to add a dog area to meet demand for pet amenities in the neighborhood. The project calls for a public dog run, as well as amenities like a rooftop lounge, a fitness studio and a sports simulator.

“This dog area was put into to pacify the growing residents in the area who had nowhere to take their dogs,” she said.

Ward 3 Council Member Steve Fletcher said the project is imaginative and ambitious in its design, public amenities and support of green energy. Shane LaFave, Sherman Associates’ director of multifamily development, said Vicinity residents can opt in to buy solar energy generated by a solar garden in the state.

“There’s all kinds of things that they’re adding to the neighborhood that are really, really exciting,” Fletcher said.

The Vicinity is one of several projects Sherman Associates is currently building in the area. The 181-unit East End apartment building is slated to open in June and Sherman said a much-anticipated Trader Joe’s grocery and liquor store could open as early as the end of June. The developer is behind the renovation of Advance Thresher/Emerson-Newton building, which will become a 182-room Canopy by Hilton hotel by the end of the year.