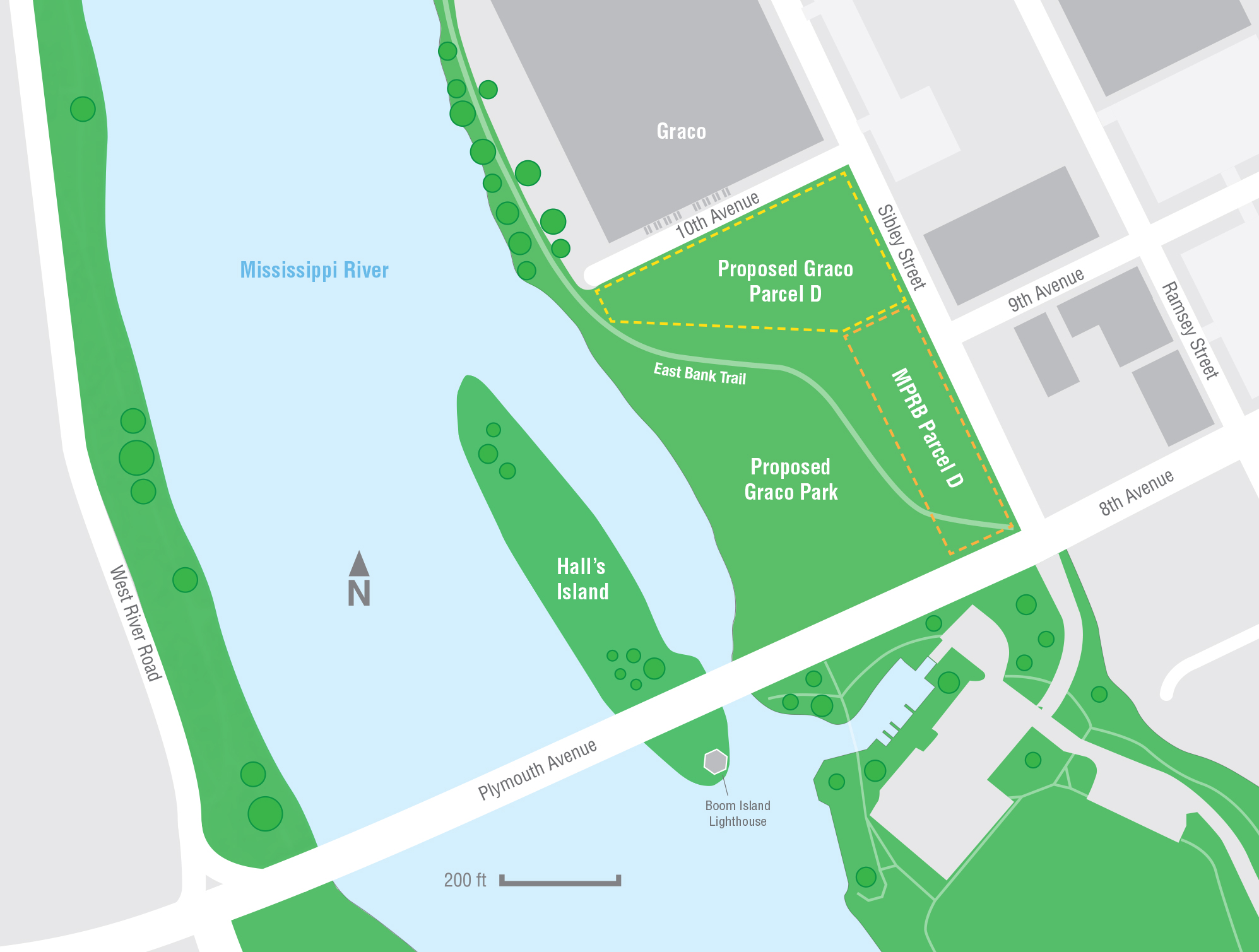 Map courtesy of Minneapolis Park and Recreation Board

An empty piece of Northeast parkland will become Graco Park under a new agreement between the Minneapolis Park and Recreation Board and Graco.

City officials say the agreement is a “win-win” between the Park Board and the local manufacturer of fluid handling equipment, two “adversaries” that have been in a recent legal battle over part of the former Scherer Bros. Lumber Co. site just north of the Plymouth Avenue Bridge on the river’s east bank.

“When we took a step back and realized we all had the same goals, it kind of just started working,” said Brad Bourn, president of the Park Board. “We took organizations that were adversaries and we created a historic partnership. I think that that deserves some recognition.”

The complex agreement, which is actually six separate agreements, will split the former lumberyard into four pieces, including approximately 5 acres that would be known as Graco Park, 2.2 acres for Graco to privately develop, 1.35 acres set aside for the Park Board and the newly recreated Hall’s Island.

Graco, whose headquarters is adjacent to the site, will buy the land set aside for private development at the fair market value of $1.1 million, prepay park dedication fees and pay for flood protection. The Graco Foundation will contribute $3 million that the board will use to develop Graco Park. The company will also agree to drop a lawsuit against the board over an East Bank Trail easement and release its condemnation claim and fees, which would return more than $622,300 the board paid so it could build the trail. In total, the agreement is worth $10.6 million.

In return, the Park Board will name the future regional park Graco Park for its first 30 years, under a donation agreement with Graco.

Several pieces of the agreement will go before park commissioners in October, Bourn said. If all are approved, community engagement, design and permitting for the park could be completed next year. Under that timeline, construction would happen in 2020 and 2021 and the park could open to the public as soon as 2022.

It’s unclear if Graco Park would be the first park in the Minneapolis park system named after a corporation. The manufacturer’s name comes from brothers Russell and Leil Gray who founded Graco in downtown Minneapolis in 1926. It’s been located in Northeast for 64 years.

Other names of business owners can be found nearby in Gluek Park, the former site of the Gluek Brewery and mansion, and B.F. Nelson Park, named for the paper mill operator and former park commissioner Benjamin Franklin Nelson.

Charlotte Boyd, a spokeswoman for Graco, said the company hasn’t begun planning what it would like to build on the 2.2 acres it intends to purchase.

The Park Board had opened a portion of the lumberyard known as Parcel D to private developers in 2015. At the time, Graco was the only one interested in developing the site, where it proposed two 50,000-square-foot buildings and 133 surface parking stalls. A previous board unanimously rejected working with the company at the time.

Boyd said Graco will go through a new process of designing and planning an expansion of its headquarters. As part of its agreement with the Park Board, the plan will have to help activate the park and serve as a buffer between the park and Graco’s industrial activities.

Christian Rothe, president of Graco’s Worldwide Applied Fluid Technologies Division, said the company needs a place to bring the hundreds of guests it hosts each year. Boyd said the development could be a combination of spaces for visitors, training and offices. Surface parking is unlikely, she added.

“It’s such an attractive piece of land. To put parking on it would be kind of a waste for us,” she said.

On the Park Board’s end, the agreement jumpstarts funding for Graco Park, a part of the Above the Falls Regional Park extending north along both banks of the riverfront.

It also creates $1.8 million in funding for the approximately 1.35 acres of Parcel D that the board will retain. Michael Schroeder, assistant superintendent of planning services, said the board didn’t have a funding stream for the parkland, which won’t be a part of the regional park.

Bourn said without the agreement it’s possible the Scherer site could remain a grass field for a generation.

“(We) could come back in 15, 20 years and without cooperation we could be looking at the same thing,” he said.

Mayor Jacob Frey said the agreement is an “achievement that will last generations” by allowing Graco to expand in place and bringing people to the riverfront.

“This is emblematic of everything that Minneapolis should be about,” he said.The Park Board finished its restoration of Hall’s Island, a landmass that the lumber company had previously dredged into the riverfront, earlier this year. Schroeder said designing and constructing the island cost about $4.5 million. Another approximately $1.3 million is needed to build a riverfront boardwalk and bridges to the island, which isn’t yet publicly accessible.