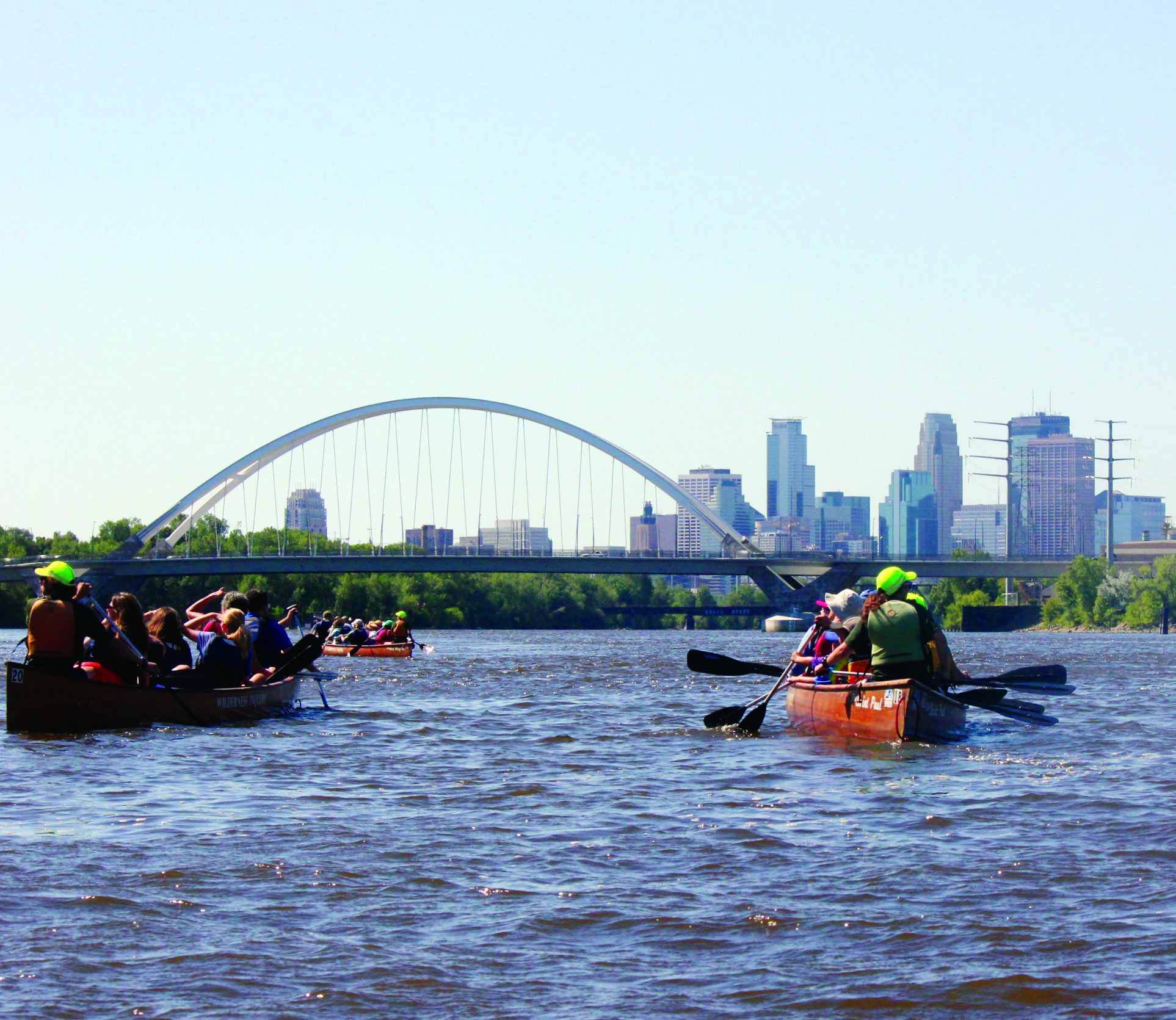 There are plenty of ways to enjoy the riverfront in downtown Minneapolis. You just have to know where to look.

Whether it’s booking your own boat or sharing a kayak, or simply watching a movie nearby, here are several ideas to get you on or near the water this summer.

Launched in 2016 by the National Park Service and several local partners, the Mississippi Paddle Share Program takes a Nice Ride approach to kayaking, allowing residents to get on the river without ever buying their own boat.

The program, the first of its kind in the country, allows people to rent one- or two-person kayaks at several points along the river for up to two or three hours at a time. It’s an idea crafted by the Park Service, Mississippi Park Connection, Minneapolis Park and Recreation Board and the Northeast-based Mississippi Watershed Management Organization.

The program has two stations near downtown Minneapolis, including one at North Mississippi Regional Park (near the Carl A. Kroenig Interpretive Center) or at the MWMO Park and Learning Center, 2522 Marshall St. NE.

The service will run kayakers $20 for a solo kayak and $35 for a tandem vessel. It’s available Saturdays, Sundays and holidays through Sept. 30, along with Fridays from June 22 to Aug. 31.

When was the last time you took a tour of your own city?

The Magical History Tour, a Segway tour in downtown and Southeast Minneapolis, starts at a storefront on Main Street and dives into the history of sites along the nearly seven miles of Mississippi riverfront. The tour route stretches from the Plymouth Avenue Bridge and goes to Bohemian Flats, meandering around both banks of the river, hitting popular landmarks like Mill Ruins Park and Boom Island, as well as lesser-known sights like Gateway Park and historic homes along Nicollet Island.

A $90 ticket comes with refreshments at Mill City Museum, entrance into the museum and discounts at local establishments like Pracna on Main.

The Minneapolis Park and Recreation Board’s Music & Movies in the Park event series brings evening entertainment to parks throughout the city, including several near the downtown riverfront.

Need an excuse to watch “Back to the Future”? The classic film is playing at Father Hennepin Bluffs Park on June 19. Or there’s “Hotel Transylvania” playing at June 26. Movies, which start 15 minutes after sunset, play regularly at the park. A schedule of events is available at minneapolisparks.org.

There are several places worth checking out along the riverfront that you won’t see on your daily commute.

The Upper St. Anthony Lock and Dam closed in 2015, but free tours are still available throughout the open season on a first-come, first-served basis. Park rangers may dive into the history of the lock, along with the river and the milling industries that once dominated the riverfront.

Have you seen the creek that runs beneath the Warehouse District? Bassett Creek runs roughly 12 miles from Plymouth and eventually spills out into the Mississippi between the Plymouth Avenue Bridge and the North Loop Playground. The wooded area is accessible via walking paths off West River Parkway.

Downtown residents may have walked through First Bridge Park without knowing it. The small piece of land on the river’s edge beneath the Hennepin Avenue Bridge is dedicated to the history of the first bridge across the Mississippi River. The first suspension bridge built on the site came in 1855.

The piece of former railroad real estate was turned into a park in 2001 around the time the Federal Reserve Bank was constructed nearby. First Bridge Park features artist-designed bronze sculptures and stories depicted on large pieces of limestone mined near the site.

The Minneapolis Water Taxi is not your average taxi.

Captains Cory Parkos and Greg Hoseth take groups of up to six people on their solar-powered boat so they can enjoy the downtown riverfront between the Lowry Avenue Bridge and St. Anthony Falls.

The taxi offers roughly one-hour pleasure cruises up and down the Mississippi for $60, or $10 a person with a full group. The boat typically picks up at Boom Island Park and can drop people off at Northeast’s Sample Room or take a full lap and come back to Northeast Minneapolis.

Highlights on the ride include the newly recreated Hall’s Island near the Plymouth Avenue Bridge and the wildlife along the Nicollet Island back channel.

The boat will be available for rides during firework shows on the Fourth of July and the Aquatennial. It can also be booked during Twin Cities River Rats water ski shows.

Reservations can be made at mplswatertaxi.com.