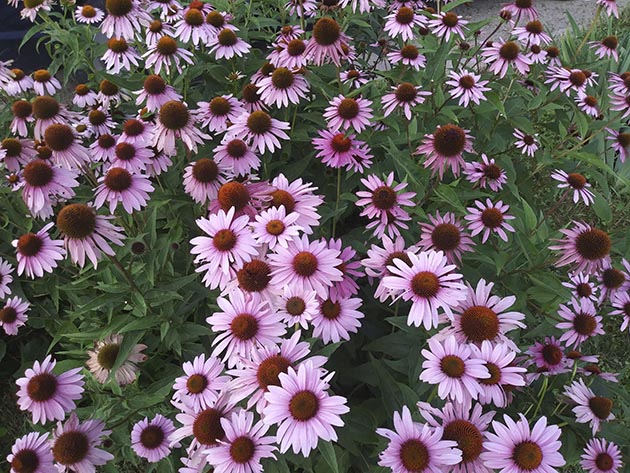 As temperatures begin to drop and the first frost looms, it’s time to start thinking about plans for your lawn and garden during the winter months. But when it comes to preparing your yard for winter, sometimes less is more.

“Nowadays, I think about what I can leave up,” said Catherine Grant, a horticulturalist at the University of St. Thomas. “What looks pretty and provides value to wildlife?”

Even though they may not look quite as nice poking out of the snow, many plants provide food for wildlife in winter. Echinacea, for example, is a great winter flower, as are zinnias, said Grant, who runs the green houses for the university’s biology department.

“Anything that has a lot of seed head can be left up for birds,” she said.

While it’s common for gardeners to make everything neat and tidy and cut all of their perennials back for winter, Grant said there’s no hard-and-fast rule that you can’t wait until spring to trim. If you do decide to cut back your perennials, she suggested leaving least 12 to 16 inches of stem.

“Solitary bees can use the stems to nest in the spring for their babies,” she said.

Grant cited landscape designer Roy Diblik for the notion of leaving things alone as much as possible.

“He thinks that plants like to grow in their own debris,” she said. “They don’t want anything cleaned up. … Our obsession with cleaning is a little displaced.”

Grant is a proponent of mulching fallen leaves with a lawn mower, then raking them into your beds.

“In the spring you can hear the earth worms coming out and grabbing bites of the leaves,” she said.

Flowers are especially good to keep through the cold months.

“Even if the flower head is degraded, it still is a great look for a winter landscape,” said Julie Weisenhorn, a horticulturalist who teaches through the University of Minnesota’s Extension program.

Weisenhower said that that have interesting bark forms make great winter viewing. Dogwood, for example, or even vines are great winter plants. You can even attach holiday lights to the vines, she suggested.

Sometimes there’s reason to be a little more diligent about fall cleanup. If you’ve experienced infestations or mold in your yard, “you don’t want foliage laying around,” Grant said.

“You should cut back and haul it away,” she said.

That’s one way to control pests like the four-lined plant bug, which hatches in early May.

Weisenhorn said peonies with powdery mildew or other diseased plants need to go in the fall. In addition, vegetables can carry disease into the next season. If you have tomatoes, peppers or tomatillos, those need to be rotated through the garden, and should be disposed of at the end of the season.

Ali Glad, who has several different kinds of gardens at her home, is a big fan of “deadheading” this time of year to extend the bloom as long as she can.

“Once the flower looks crispy, cut it down to the stem to where you see new growth,” Glad said.

In her pollinator garden, Glad typically sees bees throughout the fall, which she attributes to her deadheading technique. The main thing is to not neglect your garden once fall hits, she said.

“People start to ignore their gardens,” Glad said. “People stop watering gardens when they stop looking pretty. Your flowers will dry out. They need a really wet bed to succeed the following year.”

While it may seem counterintuitive to gardeners with less experience, fall is also a time for planting. Lynda Anderson, a former Ramsey County master gardener, said garlic is one example of a garden plant that can go into the ground in the fall.

“Other vegetables plants such as parsnips can be planted late summer and overwintered in the ground and eaten early spring when the ground thaws,” Anderson wrote in an email. “They taste better!”

Hollies and native flowers, such as rudbeckias, also can be planted in the fall. If you’re planning to add shrubs or trees to your yard, fall can be good time to do that as well. Just remember to keep watering them until the ground freezes, Anderson said.

In the fall, Anderson also divides her perennials that bloom in the spring or early summer, like peonies and lilies.

“If you divide those in the fall, the roots aren’t competing with the flowers for the energy they need to re-establish themselves,” she said.

Grant advised against pruning in the fall.

“All the signals they are sending to themselves in the fall is to go dormant,” she explained. “If you are pruning in the fall, that sends the signal for new growth.”

It’s time to prune once winter sets in in earnest. It’s easier to see the structures of trees and shrubs when they aren’t covered in foliage.

On the other hand, Weisenhower added, fall is a fine time to cut off suckers, or the small growths that pop up at the base of trees, because it’s such a small cut. By the same token, avoid fertilizing anything in the fall, because that also encourages new growth at a time when gardeners should be supporting their plants’ move towards dormancy, Grant said.

“You don’t want them to grow and get hit by frost,” she said.

Protection from the cold

For new perennials, those in the ground for less than a year, consider getting some straw.

“You want to do something so they won’t be damaged by the cold when we don’t have snow,’ Grant said.

“A burlap shield can help reduce winter injury,” she said. But make sure you wrap it thoroughly. “I see a lot of half-covered evergreens by January with the burlap falling off,’ Anderson said. “Making a screen on the south and west sides works just as well.”

Cover more vulnerable plants in mulch to ensure the crown of the plant stays covered through winter, Weisenhower suggested.