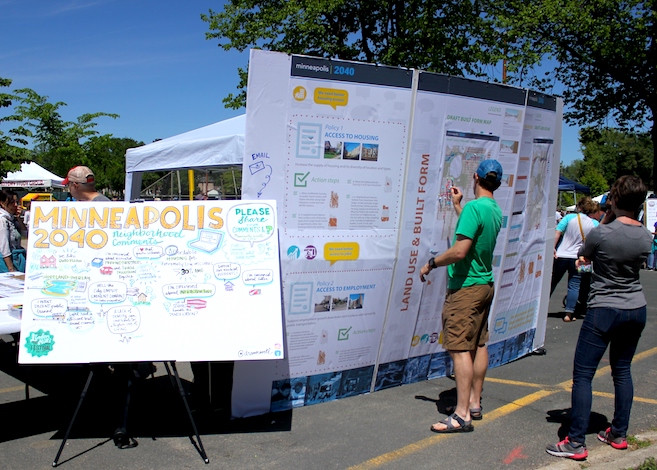 Comments on Minneapolis 2040, an update to the city’s comprehensive plan, were collected at community events, including the Linden Hills Festival. File photo

The city has scheduled two public hearings on Minneapolis 2040, its once-a-decade update to the comprehensive plan.

The comprehensive plan guides land use and development, and the city is required by law to update the plan every 10 years. Minneapolis 2040 aims to lay the groundwork for what its authors describe as “equitable growth” over the next two decades, when Minneapolis’ population is projected to grow to 465,000 from 416,000.

Published online in the form of an interactive website in March, the plan reflects 14 goals adopted by the City Council, which include promoting growth, adding living wage jobs and affordable housing and maintaining a sustainable and diverse local economy.

The City Council is expected to vote on the plan in December before submitting it to the Metropolitan Council. The land use changes outlined in the plan will be set in ordinance when the city updates its zoning code in 2019.

After nearly 10,000 comments were submitted over the summer, city planners revised Minneapolis 2040 and released an updated version in September. It stepped back from one of the most controversial aspects of the plan, which would have opened almost all neighborhoods to fourplex development, instead recommending triplexes the size of single-family homes be allowed in most neighborhoods.

The revised plan also lowered the recommended increase in allowable building heights along some transit corridors where the city aims to encourage denser development. A similar change was made to the recommended building height limits in the transition areas between some busy streets and the surrounding residential neighborhoods.