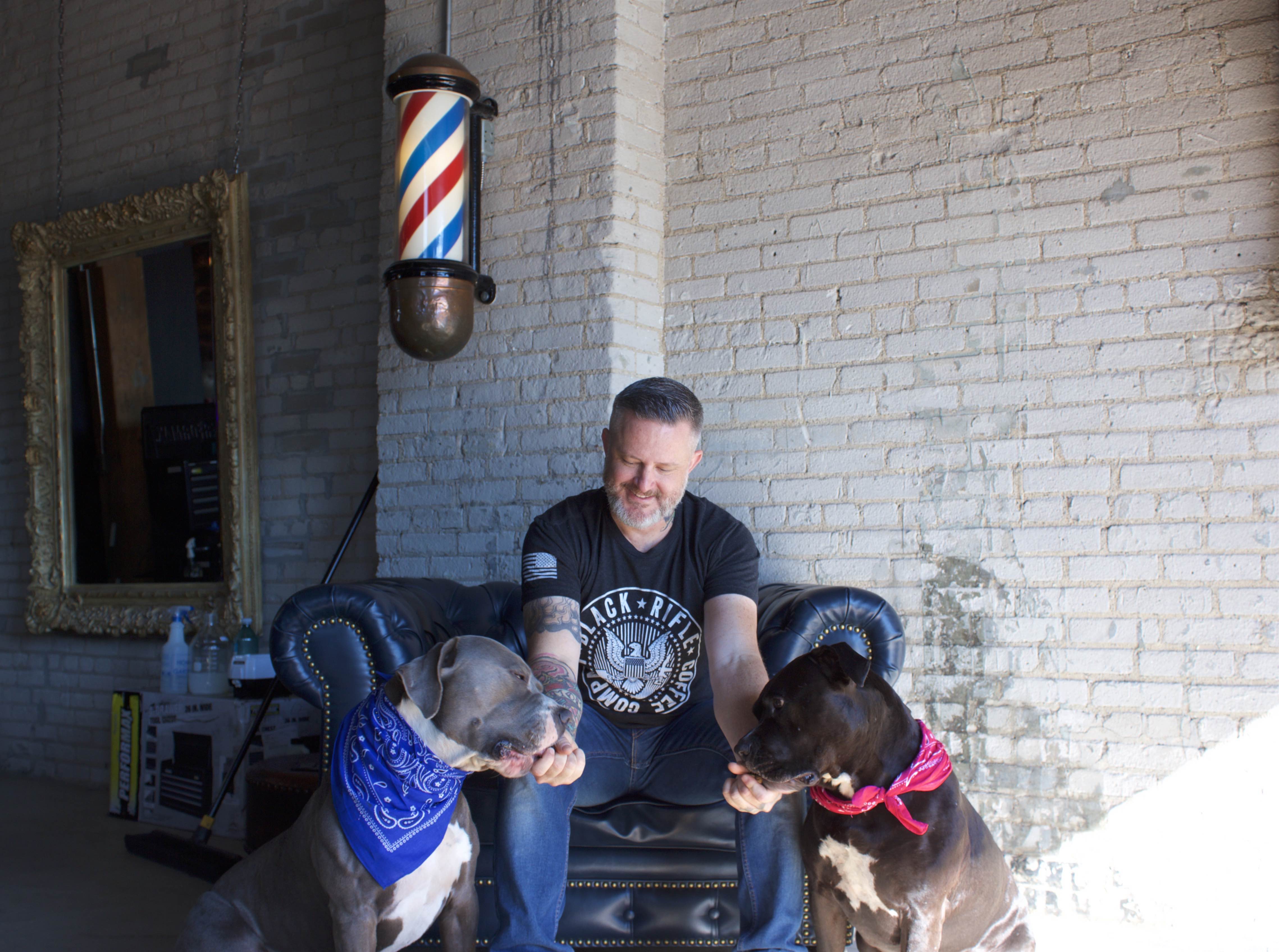 Walk into Prohibition Barbers and two pit bulls will meet you at the door, Bertha Mae and Gandalf the Grey. Don’t worry, you shall pass.

The dogs have been a fixture of the barber shop since Pomeleo opened it three years ago in the basement of the Semple Mansion in the Stevens Square neighborhood. Pomeleo recently relocated Prohibition Barbers to the Logan Park neighborhood of Northeast Minneapolis. Now the pups have their own couch.

Pomeleo started cutting hair nearly 10 years ago while on a tour of duty in Iraq when his fellow soldiers needed a little off the top. Signs of his service remain all over the shop, even in its new location, from discounts for veterans and first responders to furniture embellished with stickers from veteran-owned businesses.

When he got back, Pomeleo started cutting hair professionally, eventually starting an operation out of his home, “like a little speakeasy,” he said. When he got his barber certification and finally opened his own shop, he kept the Prohibition theme. Plus, he joked, “there’s always booze here.”

The new space is next door to newly opened Mexican restaurants Centro and Popol Vuh in a former adhesives factory along Quincy Street Northeast. It’s about twice as big as the shop’s previous space with an operable garage door in front and roughly 20-foot ceilings over the entryway.

Patrons of Prohibition will recognize the taxidermy deer heads adorning the walls. New to the décor will be a chandelier on display from Architectural Antiques down the block, Chesterfield lounge furniture and, for the shop’s first time, exterior signage.

Pomeleo is the shop’s sole full-time barber, but with the added space, he said he’d like to eventually see two more barbers. Prohibition’s clientele is made up of roughly 80 percent men, but the shop also draws queer women and gender nonconforming people. Twin Cities Pride is an especially busy time for the shop, which has it open extra hours for walk-ins.

No matter a client’s background or identity, Pomeleo said he wants everyone to be relaxed, be themselves and “not feel any pressure” at the shop.

“For me, it’s important because I think it can be a hub. I’ll have every walk of life walk in here. It’s like neutral territory,” he said.

Supporting the community is part of the shop’s brand, he said. When he’s done with the move — a grand opening is slated for October — Pomeleo said he’d like to support pit bull rescue, LGBT youth and veteran groups with fundraisers.