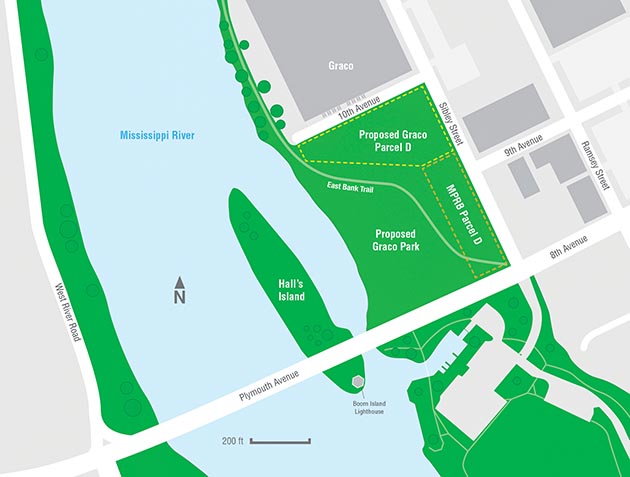 The Minneapolis Park and Recreation Board is expected to pass an agreement to rename undeveloped parkland along the Northeast riverfront in return for a dropped lawsuit and funds to begin building a new regional park.

The deal, announced at the end of September, would result in what may be the first park in the city to be named after a corporation, in this case Graco Inc., a manufacturer of fluid handling equipment whose offices are located adjacent to the former Scherer Bros. Lumber Co. site. Under the agreement, Graco will buy a portion of the site that’s been set aside for private development, help fund flood mitigation and end a legal battle against the board that could’ve ended up costing taxpayers millions.

The board’s Administration & Finance Committee voted 3-1 during an Oct. 4 meeting to move the deal to the full board, which was slated to vote Oct. 17, after this issue went to press.

President Brad Bourn called the deal “one of the most important votes” the current board members will take this term. While many commissioners criticized the renaming, several argued that the benefits outweighed the costs.

“Is this the best thing that we can deliver for the people of the city of Minneapolis? I do believe so,” Bourn said.

The six-part agreement would see Graco buying a 2.2-acre portion of Parcel D located next to its riverside facility for $1.1 million, its fair market value. The remaining 1.35 acres of Parcel D, a portion of the former lumberyard slated for private development, would see about $1.8 million in funding from Graco for improvements.

The Graco Foundation would donate $3 million to the Park Board to develop the 5.5-acre Scherer site, or what would be named Graco Park for the next 30 years under the agreement. The land, which will become a part of the Above the Falls Regional Park, largely consists of land between the East Bank Trail and the shoreline. In return, Graco will drop a lawsuit with the Park Board over an easement the board needed to build a trail.

The board estimates the total financial impact of the deal at $10.6 million. That figure accounts for the nearly $5 million contribution of the company and Graco Foundation as well as the dropped condemnation claim, prepaid park dedication fees and the cost of flood protection.

A spokeswoman for Graco said the company hadn’t yet begun planning what it intends to build on its portion of Parcel D. If the deal is approved, Graco agrees to develop something that would help activate the park and serve as a buffer from its industrial activity.

Musich said she’s received many calls from constituents who opposed the renaming.

“As we saw with the renaming of Bde Maka Ska, names are important to the residents of Minneapolis,” she said.

“(It’s) so thoroughly against the core of what I stand for as a commissioner. This is the hardest thing for me to deal with,” she said.

Cowgill, the committee’s chair, described the renaming as a “hard pill to swallow,” but said it would free up park dollars to use on other projects. Severson argued the deal could speed the development of the Upper Harbor Terminal just upriver on the North Side.

“Let’s not miss an opportunity to have a great asset on the riverfront,” he said.

With vocal support from the committee and the board’s leadership — Bourn and Vice President AK Hassan — the agreement is likely to pass the full board.

Tom Evers, executive director of the Minneapolis Parks Foundation, a nonprofit that has raised funds for several large-scale park projects on the riverfront, called it a “big step forward” for the board’s larger plans for the riverfront. But Evers said the new name may discourage other donors.

“It’s not an ideal proposition,” he told commissioners. “It does challenge fundraising directly for this site from other corporations.”

Michael Schroeder, assistant superintendent of planning services, said the first phase of improvements to Graco Park include permanent trails that would extended underneath the Plymouth Avenue Bridge, connecting the park to the Central Mississippi Riverfront Regional Park trail system.

A seasonal building with bathrooms and possibly concessions could be built near a newly created beach in Graco Park. The board is planning to build walking paths out from the beach onto Halls Island. Crews recreated the island, which was absorbed into the shore after the lumber company filled in a back channel in the mid-1960s.