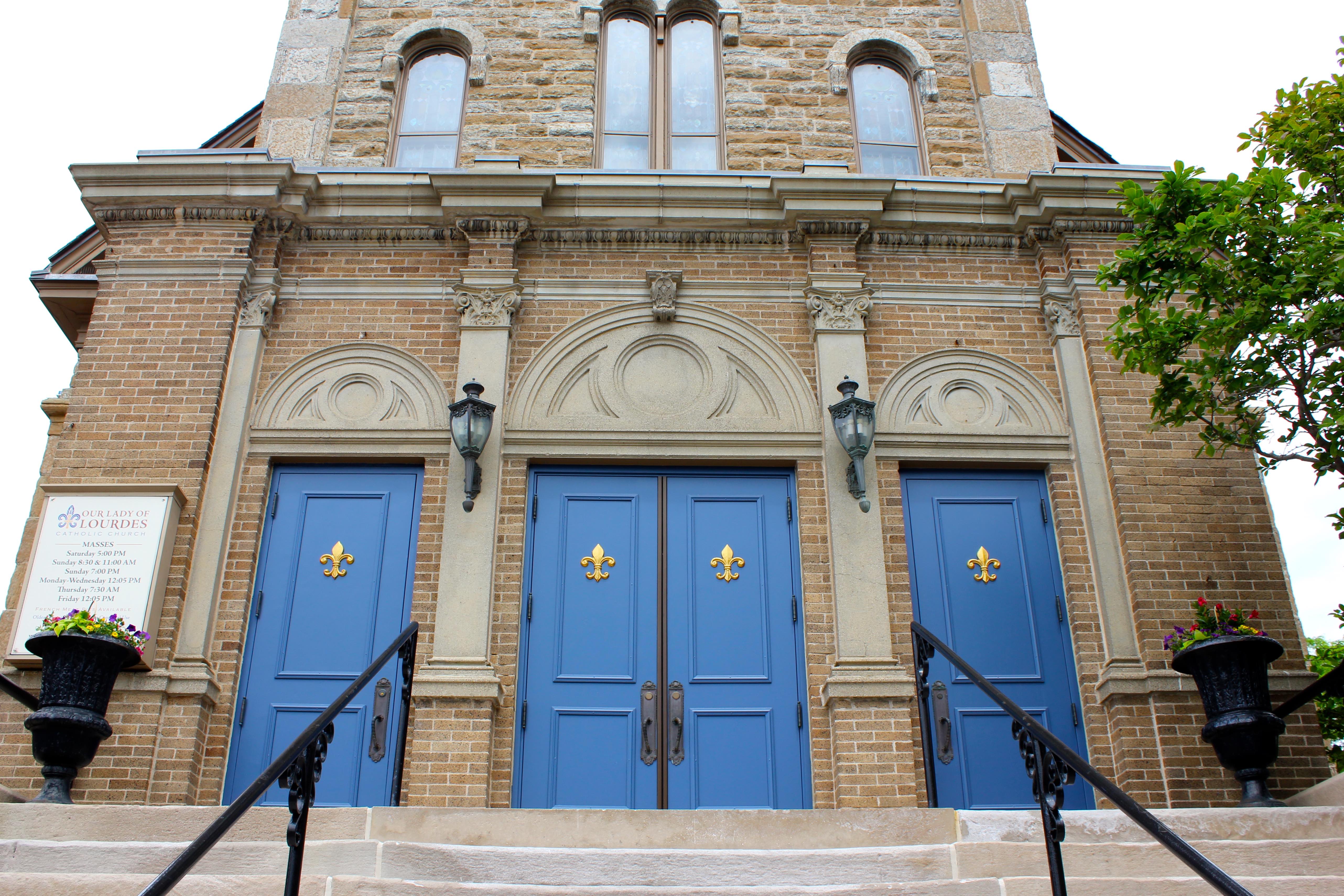 Landmarks of Nicollet Island-East Bank include Our Lady of Lourdes Catholic Church, built in the mid-1850s before Minneapolis was incorporated as a city. Photo by Eric Best

One local would give the neighborhood a historic brand

Some people call it Downtown Northeast. Others call it Old St. Anthony, or East Hennepin, or simply the area around Surdyk’s, or a laundry list of other names.

How does Old Town sound? Scott Parkin would like to know.

“If you ask people what they call the neighborhood, you’ll get 15–20 different names,” he said.

Parkin has thought about what to call the Nicollet Island-East Bank area for years. He’s an owner and realtor with Verve Realty, which has a storefront office on 4th Street in the neighborhood. Parkin, formerly a longtime neighborhood resident, has served on the neighborhood group’s board and is a past president of the Northeast Minneapolis Business Association. He hosts a historic walking tour in the summer. He may be its No. 1 fan.

If you ask the City of Minneapolis, the “limbo land,” as Parkin calls it, between Northeast and downtown Minneapolis is called the Nicollet Island-East Bank neighborhood, which Parkin argues is less of a brand and more of a long-winded description.

The area, founded as the City of St. Anthony in the mid-1800s, is the birthplace of Minneapolis and was once part of its industrial core. It’s home to old things, from the city’s oldest continually used church, Our Lady of Lourdes Catholic Church, to the city’s oldest wood frame home, the Ard Godfrey House in Chute Square Park. It has some of the city’s oldest businesses, like the Terminal Bar, as well as multi-generational immigrant-owned businesses.

It’s this history that Parkin feels should be captured in its name.

“It feels old timey,” he said. “Every cool town embraces its history. That’s really what it comes down to.”

That’s why Parkin feels Old Town should be the next brand to follow in the footsteps of successfully branded areas like the North Loop and the Northeast Minneapolis Arts District. The name isn’t far off from well-established areas like Uptown and St. Paul’s Lowertown, as well was newly created names like East Town, a term recently developed by the East Town Business Partnership (formerly the East Downtown Council) to rebrand the Elliot Park and Downtown East neighborhoods. It’s a name that is used in countless cities, from Chicago to San Diego, so Parkin said it would be recognizable to tourists and out-of-towners.

“A lot of great cities have an Old Town,” he said. “It universally signifies that there is a ‘there’ there, that there’s some to do there (and) that it’s a place to go.”

But why the rebrand now?

“Because people are now seeing Minneapolis as a travel and tourism destination. We want to compete and have friendly competition and hold our own with the other parts of Northeast,” he said.

The brand, Parkin argues, would capture the spirit of the area, which besides a few restaurant chains, is still dominated by independent business owners and historic buildings. Despite several recent large residential tower developments, Parkin said the neighborhood hasn’t been turned over to developers.

“This is one of the coolest, most convenient neighborhoods in the city of Minneapolis, but it historically alludes big-time development and big-time developers,” he said.

Parkin, whose company has sold hundreds of homes in the area and nearby downtown and Northeast neighborhoods, envisions Old Town merchandise, an Old Town music festival, an Old Town beauty pageant and a tortoise mascot, fitting for the neighborhood’s longevity. He’s started a Facebook page for the rebranding effort and has already purchased a domain for a website.

The work now is getting money together to support the effort and getting exposure. Parkin said winning over local business owners, neighborhood groups, residents and developers with all their competing interests will be his biggest hurdle to getting the area to embrace the Old Town moniker.

“I’ve never had such a challenging project. I don’t think that there’s a logical outcome that’s going to come from getting everyone together to think about it.  It’s not really going to work that way,” he said. “There’s just so many different ways to look at it. It’s like a Jenga thing. The minute you try thing it makes all the other things fall apart.”

Do you have a better idea? Then Parkin would like to hear it.

“If someone could come up with a better name, I would adopt it and advocate (for it), but the neighborhood needs a name,” he said. “I would like to finally make something happen and I think the business owners would like to see something too.”