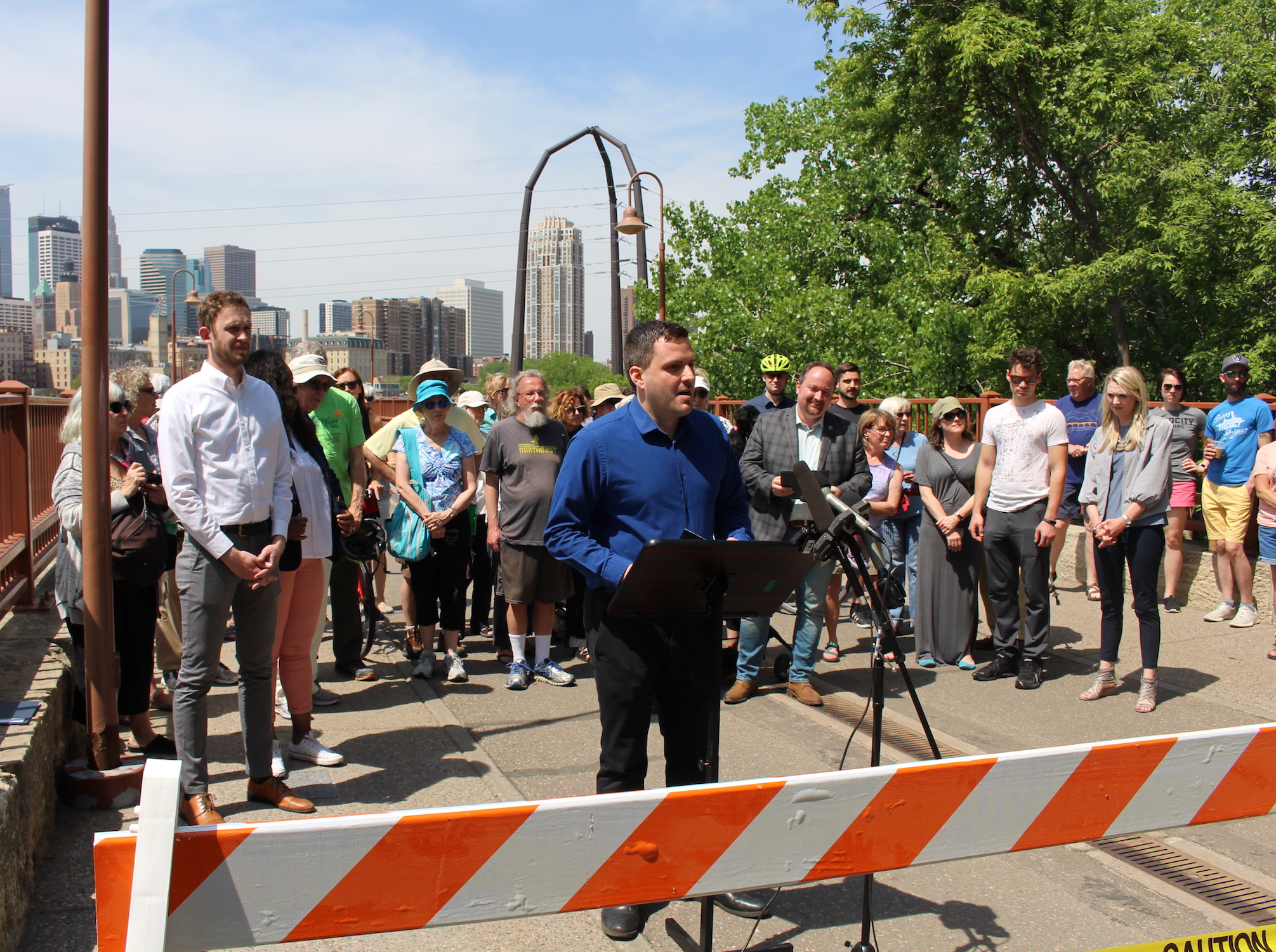 Minneapolis Park and Recreation Board Commissioner Chris Meyer speaks at a press conference Friday. Meyer and other elected officials rallied to put pressure on state lawmakers to provide funding for repairs to the Stone Arch Bridge.

The Minnesota Legislature included $1 million for improvements to the Stone Arch Bridge in its bonding bill, passed late Sunday night. But DFL Gov. Mark Dayton has not yet signed the bill, meaning there’s no guarantee the Minnesota Department of Transportation will receive the money for the project.

Dayton had 14 days from the end of the session on midnight Monday to sign the capital-projects bill, veto it or kill it by not signing it. He has yet to take action on the bill, which includes $825 million in general-obligation bonding and $1.43 billion in total appropriations.

The $1 million would cover the inspection of the 135-year-old bridge as well as design and plan preparation for it, according to MnDOT. The agency has said it may need to close the bridge later this summer without funding for the inspection.

But the funding would not cover the total of nearly $13 million in repairs MnDOT needs to make to the bridge. In a statement, MnDOT Commissioner Charlie Zelle said that $1 million won’t address the underlying issue of deterioration of mortar above and below the water level.

“The longer we wait, we risk continued deterioration and significantly more expensive repairs,” he said.

Zelle also noted how the department cannot use its main funding source, the Trunk Highway Fund, for the project.

In an interview, State Bridge Planning and Hydraulics Engineer Amber Blanchard said the $13 million would allow MnDOT to inspect the bridge and design and construct the repairs. She said construction would start in the summer of 2020 at the earliest if the department received funding this year.

Blanchard said that MnDOT typically inspects bridges underwater every five years but that the consultant who inspected the bridge last August recommended annual inspections. She said the department has until August to do its next underwater inspection, at which point it could have to shut down the bridge.

MnDOT ranked the Stone Arch Bridge as its top priority in its capital budget request for 2018. But neither the House nor Senate Republicans included the project in their initial bonding bills. The Senate rejected its bonding bill on May 17, with DFLers arguing that the Republicans’ $825 million package wasn’t adequate.

Local elected officials urged the Republican-controlled Legislature to fund repairs to the bridge in a press conference on May 18. They noted how the bridge is an icon of the city and state and how it could close without funding.

“The more it deteriorates, the more expensive it’s going to be ultimately to repair this,” Park Board Commissioner Chris Meyer said.