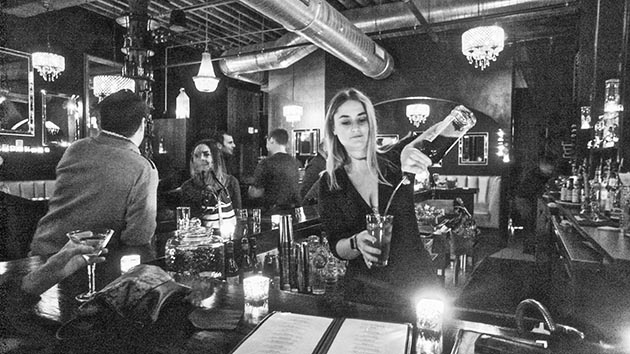 The St. Anthony Main area in the Marcy-Holmes neighborhood across river from downtown is now a long, long way removed from its blue-collar origins. When even Nye’s has been rebuilt with an emphasis on beverages more upscale than Grain Belt and Old Fashions, it comes as no surprise that someone would see the logic in a very cozy, Manhattan-style martini bar.

That someone is Ivy Ivers, and her logic has been to transform her Stem wine bar into The Dirty Martini Speakeasy, 24 University Ave. NE, is the kind of place you might find tucked into a side street in TriBeCa or Chelsea, one of those hangouts you almost walk past before stopping to peek in the door and see what the vibe is really like.

With Dirty Martini, directly across from Surdyk’s, the vibe is comfortably mellow. A live DJ spins vinyl at a decibel level that allows the kind of conversations adults are prone to have over (very) good martinis. The walls are a collection of mirrors set over walls of black, silver and gold paint textured wallpaper.

(Ivers, who does her own decorating, said, “It’s all inspired by the era of ‘Mad Men’ and ‘The Great Gatsby.’”)

Patrons — probably no more than 70 at any given moment — may chose from a series of classic yellow leather banquettes, a couple in coves, or the bar, where Ivers’ truly smallish staff doubles as both servers and bartenders.

Aaron Dworsky and Libby Dumonseau were on hand one recent evening and refused to let us pay for two Le Passione martinis. (Prairie Vodka, Passionfruit, Tattersall Crème de Fleur, Lime Juice.) Without pretending to be a connoisseur of fine martinis, suffice it to say the beverages delivered both fresh flavor and a happy, contented glow.

Dumonseau explained that Ivers reassessed the neighborhood, where an upscale clientele has been in-flowing for years — and lately in dramatic numbers with the recent completion of the 20-story 280-unit NordHaus complex, where rents top out at close to $10,000 a month. At least two other large-scale residences will come on line in the next couple years, both within a couple blocks of Dirty Martini.

Point being, a $10 martini (or other well-mixed cocktail) is hardly out of each for the economic class moving into the old ‘hood.

In an e-mail exchange, Ivers said, “I had Stem for a little over two years, and it was a beautiful space with really unique wines, but (Northeast) has grown and evolved a lot since I first started to build wine bar three years ago, and in my experience you have to always be trying the next new thing to stay competitive and on peoples’ radars in growing neighborhoods.

“With the area bringing in a young professional crowd inhabiting the high-rise residential buildings, I decided a chic speakeasy was something to try.”

She says she sees Dirty Martini fitting in at either end of a night out: early — for drinks after work — or for a nightcap.

“We become part of a nice symbiotic relationship with restaurants in the area,” she adds. “I think there are a lot of people who want a new place that isn’t a club and isn’t a restaurant.”

Her place, she said, is “a unique experience all on its own.”

Very much a part of the unique experience is the comparative lack of bustle and clatter of staff.

Dumonseau says the typical night has four people, all, as mentioned, with both bartending and table service skills and duties. (The food menu, such as it is, is strictly bar snacks.)

Dworsky, though, is the one with the deepest mixology skill set.

“The whole idea is to keep it classic,” Dworsky said. “The drinks generally come with four or five ingredients. But also we’re taking the attitude that we have to stay competitive with prices.

“There are plenty of places you can go for a $16 martini, if that’s what you want to do. But right now, staying competitive with the places around us, we’re comfortable with the $9–$10 range. It’s up from a lot of places where you can get a Tito’s (vodka) for $6 to $7, but there’s more to this [place] in terms of both the quality of the drinks and the atmosphere.”

As we chatted and the martini did its magic, Dworsky was casually interacting with a group of 10 quintessential “young professionals,” all 30-ish and attired in upscale-casual shirts, blouses and sweaters. Lined up at the bar 12 feet from one end to the other, they could all hear each other’s quips and jokes. The DJ’s music menu provided a nearly ideal level of ambient liveliness without becoming another character in the adult conversation.