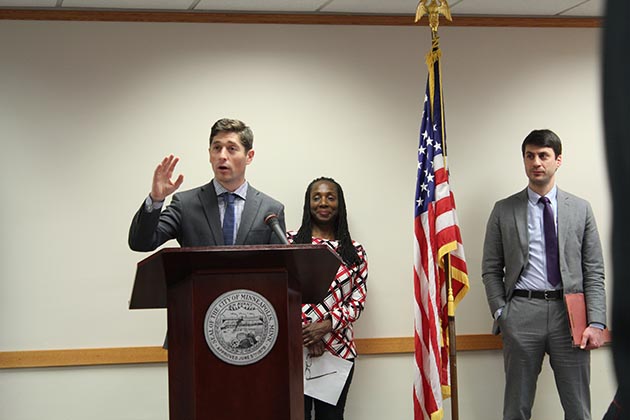 More Representation Minneapolis aims to counter an “eviction crisis,” give tenants a boost

A new initiative aims to level the playing field in Hennepin Housing Court and give tenants on the edge of eviction a better shot at staying in their homes.

Mayor Jacob Frey on Nov. 14 announced the launch of More Representation Minneapolis, an effort to bring more volunteer attorneys to housing court and increase the amount of their time dedicated to giving free legal representation and advice to tenants. Fewer than one in 10 Minneapolis tenants facing eviction are represented by an attorney in housing court, while roughly half of landlords have attorneys argue their case.

“We have made and are making protecting tenants rights a cornerstone of an affordable housing agenda here at the city,” Frey said. “More representation in Minneapolis is a big step toward making good on that promise.”

The initiative would enhance a collaboration between the Volunteer Lawyers Network and Mid-Minnesota Legal Aid, who have staffed a housing court project in Hennepin County since 2000. They aim to recruit 25 new volunteers and increase their work hours by 20 percent.

Frey’s 2019 city budget proposal also includes $150,000 for a pilot project to fund legal services for low-income renters facing imminent displacement from their housing. He said such a project at full strength would require $1.5 million annually to fund a staff of 10–11 attorneys and five- to six-member support staff.

Frey made the case that preventing evictions is not just “the right thing to do,” it’s also sound fiscal policy.

“Studies show that other legal resources and services are strained by the instability that comes with eviction,” he said, adding that a New York City study estimated each dollar spent on legal services to prevent eviction generated $5–$6 in savings, and that research in Massachusetts “found a very similar statistic.”

Minneapolis is facing an “eviction crisis” that is separate but related to the ongoing affordable housing crisis, said Luke Grundman, managing attorney in the Minneapolis office of Mid-Minnesota Legal Aid. That crisis disproportionately affects women of color with children, Grundman said, noting that 80 percent of the clients who get free legal aid in housing court are people of color and 85 percent are families with children.

An eviction can mean the difference between living independently and being in a shelter or on the street, he said.

“People have nowhere to go,” Grundman said. “We have a vacancy rate right now of less than 2 percent in this city. If you have an eviction on your record, it’s a lot hard than that to find housing. It is almost impossible.”

The odds do not favor tenants who arrive at housing court without representation. Grundman said a referee hears about 40 cases a day, and tenants typically have just a few minutes to make their case.

“Lawyers can really help,” he said. “The cases that we take, 96 percent of them are either settled or resolved in the tenant’s favor. Most tenants who are represented do not have an eviction on their record when they leave court.”

Gina Robinson said she believes full representation from an attorney would’ve helped her when she faced eviction proceedings. A mother and Minneapolis resident of more than three decades, Robinson was among the speakers at the event marking the launch of More Representation Minneapolis.

Robinson, who is not an attorney but now donates time to the Volunteer Lawyers Network, said she ended up representing herself in eviction proceedings and lost to her landlord, who arrived with an attorney. She described the episode as “terrifying” and “exhausting financially, physically (and) emotionally.”

Robinson said providing legal representation to tenants facing eviction not only leads to better outcomes for those tenants, “it also lessens feelings of hopelessness and despair and decreases the burden of those who already carry heavy burdens.”

“Nearly 80 percent of our clients are people of color, and we disproportionately deal with problem actors who operate in neighborhoods deeply affected by poverty,” Walsh said. “This is exploitation of the worst kind.”