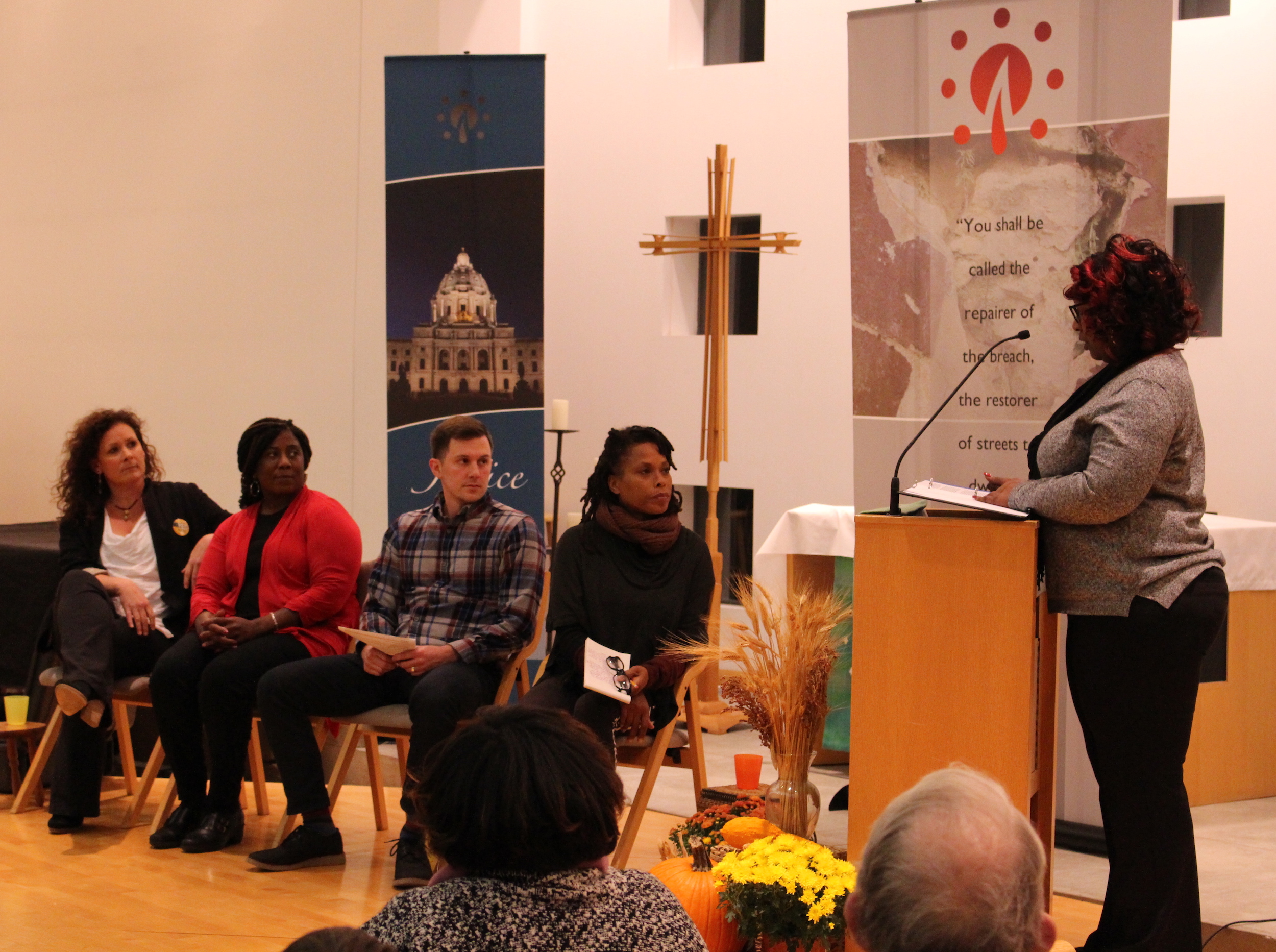 A two-term incumbent, two active parents and a former MPS teacher are running for two open at-large seats on the nine-member Minneapolis Public Schools Board of Education this fall.

The election comes at a critical time for the over 36,000-student school district, which has a $600 million annual operating budget and is working to stabilize its finances and set a new strategic plan. The new plan could include changes to attendance zones, grade configurations at schools and staffing models, though third-year Superintendent Ed Graff hasn’t yet brought any proposals to the School Board.

Three district School Board seats are also on the ballot this fall, with an incumbent running unopposed in each. More information about those candidates can be found on their respective websites (jennyarneson.com, siadali.com and nelsoninz.com).

Four other School Board seats are not on the ballot this fall.

The at-large candidates have already participated in several forums and will participate in another 7 p.m.–8:30 p.m. Oct. 22 at Franklin Middle School, 1501 Aldrich Ave. N. More information can be found at pollenmidwest.org/collection/unbound. (A recap of the Oct. 15 forum can be found here).

Here is a look at the four candidates for the two open at-large seats.

Kimberly Caprini has served on over a dozen committees, site councils and parent groups over the past six-plus years.

Her work has included advocating for re-opening Franklin Middle School and for an International Baccalaureate program at Olson Middle School and supporting collaboration between the district’s elementary, middle and high school principals. She’s also advocated for capital improvements at Patrick Henry High School, been part of a south side advocacy group and served on principal interviewing committees at Henry, Harrison Education Center and Northeast Middle School.

“I don’t see this as volunteer work,” Caprini, a parent of two, said of her efforts in education. “This is a career to me. Education (and) advocating for education is literally something that I know I’m going to do for the rest of my life.”

The daughter of a public schools teacher, Caprini went to private catholic school growing up, though she said she wanted to attend the now-closed West High School. She said she’s been watching Patrick Henry High School since her oldest daughter was 3 years old and that she wanted her kids to go to a school that “looked like the city they lived in.”

Caprini said she brings a collaborative approach, noting as an example that she worked with the Minneapolis Police Activities League last summer to help find a coach and practice space for a junior volleyball team. She said she believes the School Board directors need to work as a governing body, adding that she thinks more than just two or three board members should be involved in writing policy.

Graff said in August that the School Board would vote on the plan in December, but the administration has subsequently said it won’t present any models to the board until December or January.

“We don’t have time to sit in limbo (as) many families want more information and answers,” Caprini said. “I do believe he is under a lot of pressure, but that pressure goes along with the territory.”

Caprini lives in the Cleveland neighborhood with her husband and daughters and works as a resource navigator at the nonprofit Neighborhood Hub. This is her second run for School Board.

Sharon El-Amin has been involved in the North Side community for years, involvement that has included owning El-Amin’s Fish House, serving on the North High School site council and serving as the social coordinator at her mosque.

She said she would focus on accountability, community and transparency as a board member, adding that she will fight for all children and make sure that everyone is held accountable.

“We need to go out and change the system,” El-Amin said in a Facebook video with civil rights attorney Nekima Levy Armstrong. “Our Minneapolis Public Schools (are) hurting right now, and we can no longer sit back.”

A 27-year resident of Minneapolis, El-Amin said her decision to run for School Board stemmed in part from two situations in the past couple of years. One involved missing revenue in the North High School athletic department, which she said eventually led to the investigation of the school’s athletic director. The other involved her son’s experience in Spanish class at North, during which she said the teacher had watch movies in English.

“Their assignment was to come in class, turn in their cell phones and remain seated and watch ‘Coach Carter,’” El-Amin said in her video with Levy Armstrong.

El-Amin said the district needed to raise its standards for curriculum and make sure its teachers are willing to learn how to work with diverse student populations.

She said she thought the School Board was correct to restore $6 million to middle and high schools this past spring, despite the administration’s recommending the board approve the budget they presented.

Supporters of the move said the money would ensure that middle and high school students have access to a well-rounded education. Opponents noted over one-third of the restored funding would go to schools in Southwest Minneapolis, the most affluent part of the city.

El-Amin said the situation showed the power in parent advocacy, adding that she thought it was good the money went back to schools. But she said more thought should have gone into budgeting before the decision was made.

El-Amin recently apologized for what she described as “insensitive” Facebook posts toward those who identify as lesbian, gay, bisexual, transgender, queer, intersex and asexual. She said she’s been working to “broaden” her perspective and deepen relationships with those who identify as LGBTQIA.

She works for the Hennepin County Sheriff’s Office in a clerical role. She sought the Minneapolis DFL’s endorsement in May but did not receive it.

Rebecca Gagnon said her priority for a third term on the School Board would be fiscal stability, which she said requires leadership stability. She noted in an interview she’s served with 17 different School Board members, two superintendents and one interim superintendent during her eight years on the board.

“I believe that consistent, stable leadership is what the district needs right now more than anything,” said Gagnon, a mother of three, including two MPS graduates.

Gagnon and her family moved to Minneapolis in 2008 after living in Austin, Texas, among other places. She subsequently became involved in her local schools and community before seeking a seat on the School Board in 2010.

Gagnon has held several leadership positions during her two terms on the board, including, policy chair, treasurer and chairwoman. She has also served on a number of state and national boards, including the Association of Metropolitan School Districts and the National Assessment Governing Board.

Accomplishments she noted in an interview included the re-opening and expanding of schools, ensuring that there are logical K-12 pathways in every area of Minneapolis and community engagement. She noted her willingness to address community members’ concerns and be transparent, explaining, for example, how she helped people understand the need for building expansions in Southwest Minneapolis several years back.

Gagnon said she supports the process the administration is undertaking for reviewing the district’s finances and programming. She said the district has to have strategic and authentic community partners, including government entities and social services.

“I don’t think we can be fiscally stable without partners,” she said.

Gagnon said the district needs to increase its market share, or the number of Minneapolis students who attend district schools, echoing calls from the district’s administration to do so. She said that means having people tell “the great stories about our schools,” knocking on doors and being at community events.

“We must invest to bring people back,” Gagnon said. “I think looking at getting out of this reactionary, hair’s-on-fire (approach) to significant investments in order to attract and retain a significant amount more students, that’s the conversation the board can have.”

She characterized the resolution to restore middle and high school funding as critical for maintaining elective opportunities and student supports, such as a chemical-dependency counselor at South High School. Gagnon had introduced the resolution to the board in March.

She said she’s glad the district is taking a deep dive into transportation and said she wants to make sure she has a better grasp of why people leave the district. She also expressed interest in the district exploring a career-pathway center similar to ones in Rochester and Robbinsdale.

Gagnon lives in the Kingfield neighborhood and is a board member of the nonprofit 180 Degrees. She sought the Minneapolis DFL’s endorsement in May but did not receive it.

Josh Pauly is the only at-large candidate who has worked in the Minneapolis district and the only one with a master’s degree in education, facts he’s stressed in his campaign.

“It’s important to have folks who understand what it’s like one the ground, someone who has seen what has a positive impact on our students,” said Pauly, who taught for three years Sanford Middle School.

A first-generation college graduate, Pauly, 31, said he decided to become a teacher after realizing how much he enjoyed working with young people. His involvement in government came after the 2016 presidential election, when he started a nonprofit that aims to engage people in public policy. He said he found himself spending so much time working on the organization the he decided to step away from the classroom to focus on it.

“I thought community engagement, civic engagement was this space that really wasn’t being worked on, and I wanted to try to do it for a couple years,” he said.

As a School Board member, Pauly said his immediate priorities would include community engagement, getting up to speed on the district’s comprehensive planning process and advocating for good governance. He said he would want to make sure that schools are safe and academically rigorous and that he would advocate for manageable class sizes and support services such as social workers.

“There’s some things that kids come into our classrooms with,” he said. “They need help with some of these different topics or areas, and if we can give them those services, education is going to be so much better.”

Pauly said he supports the district’s efforts to address the underfunding of special education and English learner services that cost it tens of millions of dollars annually. He disagreed with Gagnon’s budget amendment last spring, saying the board used $6 million to “solve a $1 million problem.”

“There’s three schools that I think really needed help,” he said, noting Washburn, Patrick Henry and FAIR high schools. “The way that we did it, we gave 16 schools money (and) 52 got nothing but lost some of the money that was going to central services. I just don’t think that was the right way to solve the problem.”

Pauly said he appreciates Superintendent Graff’s focus on social-emotional learning, and he praised Graff for his work on the budget deficit. He said he would be an advocate for more state funding for MPS if elected, noting the state and federal government’s underfunding of education, but he also said the district needs to be fiscally responsible.

“We need to keep our dollars close to our kids in our classrooms,” he said.

Pauly and his wife live in the Standish neighborhood. He is executive director of the nonprofit Books on Wings.