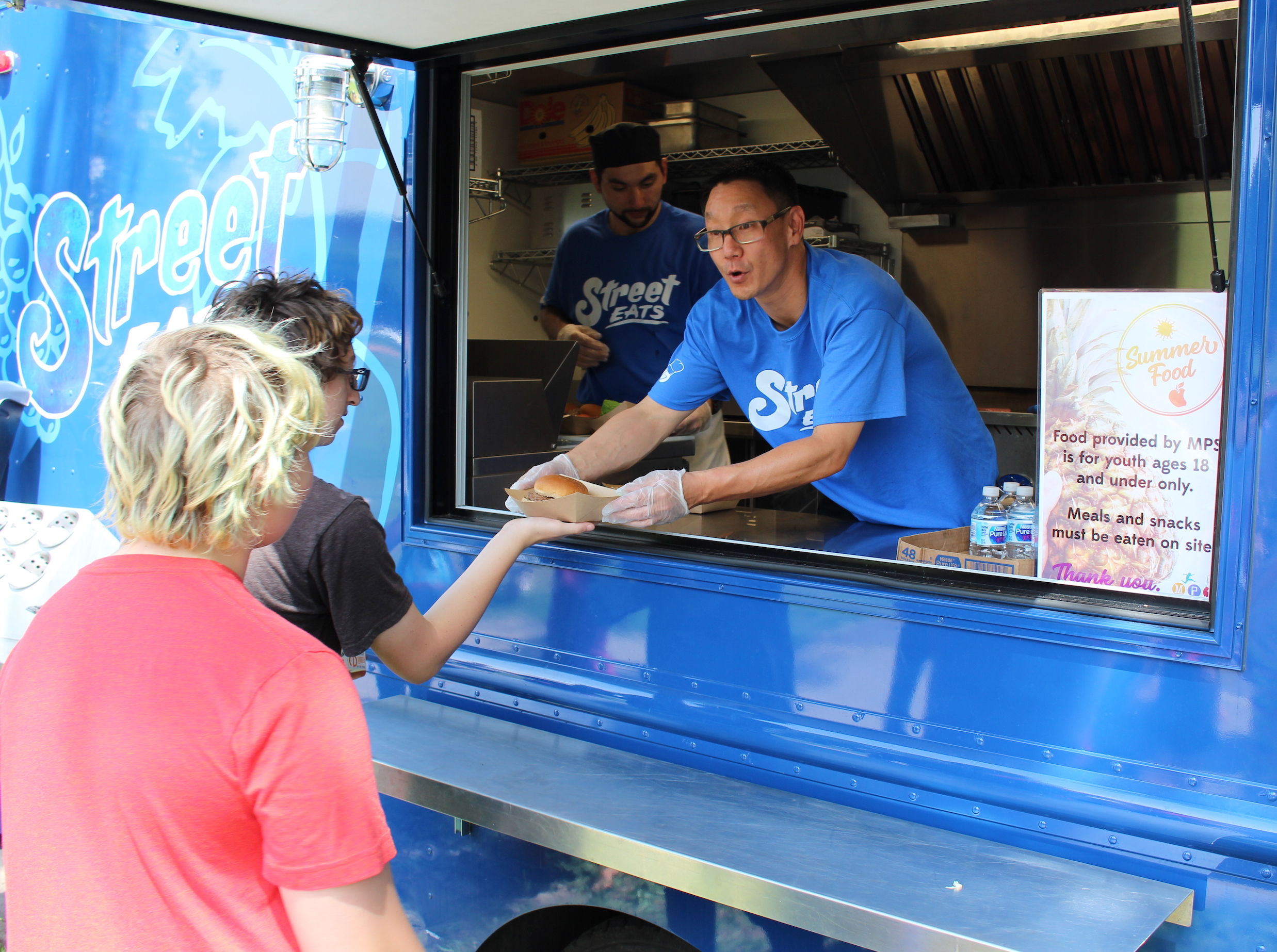 The district’s Culinary & Wellness Services department served hamburgers, potato salad, fruit and water to dozens of kids for no cost out of the new truck. Minneapolis police officers handed out ice pops to the kids, who played on the playground equipment and basketball court.

The kickoff event came less than a week after the start of summer vacation, a time when students can be particularly vulnerable to missing meals, said Sara Eugene, compliance supervisor for the department.

“This program really helps increase access to food during the summer months,” Eugene said. “(Students) have access to breakfast and lunch during the school year, but without that safety net, they can fall through the cracks.”

MPS’ Culinary & Wellness Services department serves meals and snacks at about 115 sites during the summer, Eugene said, including at over 15 schools and dozens of parks, libraries and community sites. Many of the sites offer a combination of breakfast, lunch, a snack and/or dinner.

The department also sends the food truck and a food bus to about 10 sites each week. The food bus, which the district launched five years ago, serves cold picnic-style meals, while the food truck serves fresh-cooked meals, such as hamburgers, Korean rice bowls and Philly cheesesteaks.

MPS launched the food truck this spring, thanks to funding from Cargill through the Minnesota Super Bowl Host Committee. The committee provided the Culinary & Wellness Services department with a $75,000 grant to purchase the truck as part of its 52 Weeks of Giving campaign.

The committee said in an October news release that the truck would enable MPS to expand service to five new community sites to provide meals to 15,000 young people. Bertrand Weber, MPS’ Culinary & Wellness Services director, said in the release that only about 20 percent of students who eat with the district during the school year access its meals in the summer.

“We want to increase the number because students in our community need access to nutritious food all year long,” he said. 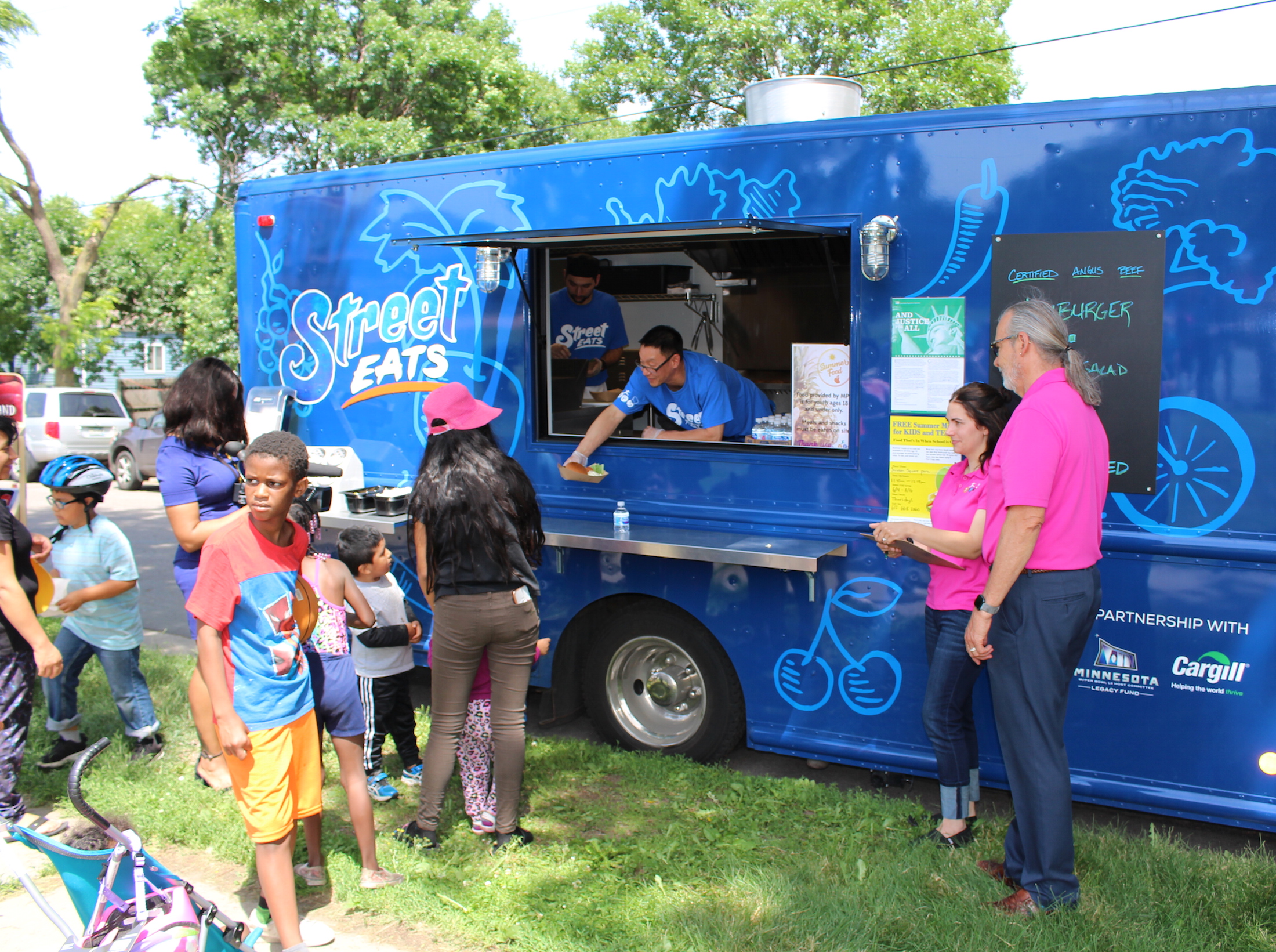 Katie Clark Sieben, director of The Cargill Foundation, said sponsoring the food truck was a natural fit for the foundation, which focuses on K-12 education and childhood nutrition.

Eugene said that kids don’t need to sign up or register to access the meal program, which the U.S. Department of Agriculture sponsors. Each site has to select a time to serve meals, she said, and anybody under 18 can show up and eat for no cost.

Parent Tanya Lewerenz sat with three of her kids at Jackson Square Park on Thursday as they ate their meals. Lewerenz said it’s her family’s fourth summer accessing the meals at the park, adding that “everybody in the community” comes out for the meals.

“The people who need it don’t have to feel awkward because all of the families participate,” she said.

Lewerenz added that she thinks the food truck is a nice change.

MPS’ Culinary & Wellness Services department has a list of summer-meal sites and menus on its website (nutritionservices.mpls.k12.mn.us/sfsp). The meals cost nothing for kids, the department stresses, and all they have to do is show up. The summer-meal program began Monday and ends Aug. 17.