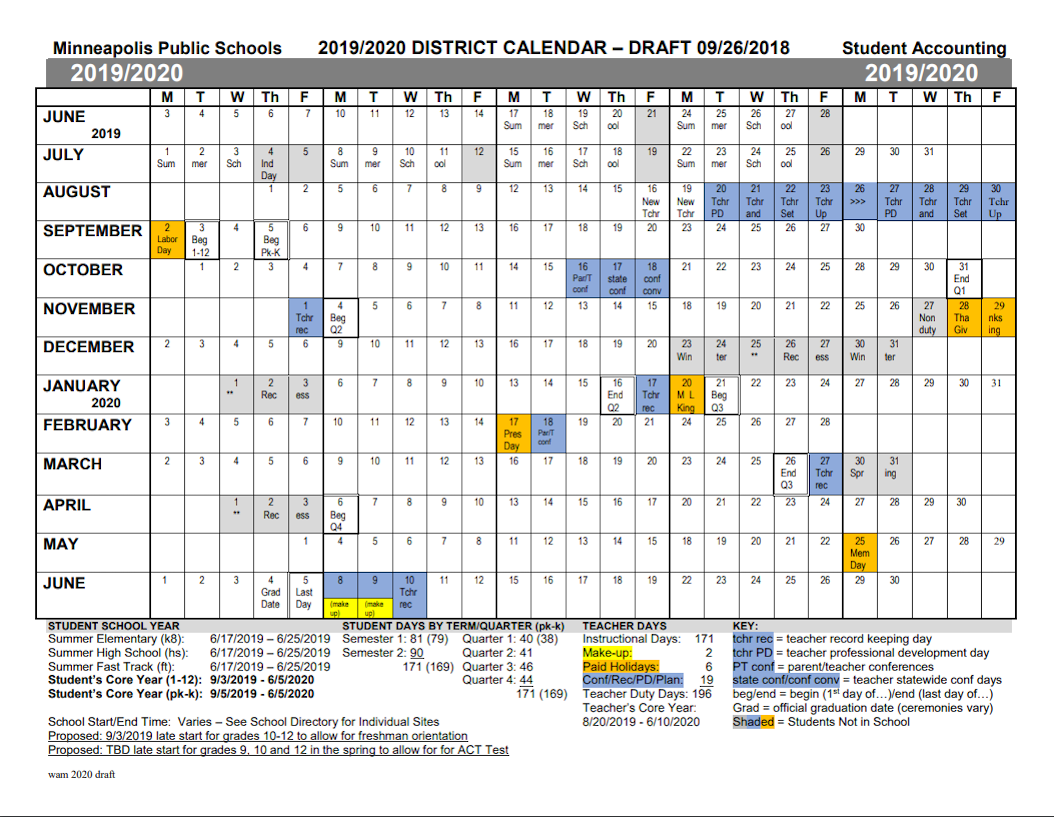 Three fewer school days and a post-Labor Day start could be on the way for Minneapolis Public Schools students next fall.

District Chief of Staff Suzanne Kelly told the School Board on Oct. 9 that starting after Labor Day if possible was a guiding principle for the calendar committee. She noted budget surveys from last year in which approximately two-thirds of respondents said they favored a post-Labor Day start.

Kelly said other guiding principles included: building in potential make-up days in the event of weather-related closures; building in record-keeping days at the end of each academic quarter; and scheduling staff professional development at the beginning of the school year, if possible.

The new calendars would include 171 student-contact days or equivalent hours each school year, six above what state law requires for students in grades 1–11. School would not be in session on the third Thursday and Friday of October each of the years, which has typically been when Education Minnesota holds the Minnesota Educator Academy.

Teachers would have nearly two weeks of professional development each year in August before the start of classes. Everyone would continue to have off the Wednesday before Thanksgiving.

Kelly said the committee tried to keep school from going past the first week of June because of concerns about heat but that late Labor Days in 2020 and 2021 made that a challenge. She said the committee talked a lot about shaving off a few days from winter break in 2020-21 and 2021-22 to allow for an earlier end date. But she said staff felt like they really needed a break at that point in the school year.

Kelly noted that the proposed calendar would meet the 196-duty day requirement as outlined in the district’s contract with its teachers union. She said the committee tried to minimize the number of two-, three- and four-day weeks, noting feedback from parents that they don’t like choppy weeks.

The 17-member committee included district staff, a member of the Minneapolis Park & Recreation Board, the interim director of Minneapolis Community Education, parents, principals and the heads of the district’s teachers and educational support professional unions.

Board treasurer Jenny Arneson said Oct. 9 that she hoped the Park Board and Community Ed were in a better place to plan childcare options over winter break after being represented on the committee.

Arneson said it can be difficult some for some families to pay for two weeks of care over winter break. She added that the district, Community Ed and the Park Board in the past have been able to partner to find families affordable options.

Board members Rebecca Gagnon and Ira Jourdain asked Kelly and Superintendent Ed Graff if the district’s hourly employees understand they would have fewer days of work under the new calendar.

Kelly noted the head of the ESP union was on the calendar committee. She said the committee talked about reducing the number of “choppy” weeks would be better for hourly employees, because they would have more consistent weeks with a more consistent number of hours.

The proposed calendar would not apply to the district’s community partnership schools, including Justice Page Middle School and Southwest High School. But Graff told the School Board it’s virtually impossible that those schools would be able to start before Labor Day because of transportation and professional development considerations.

The School Board will hold a final vote on the calendar proposal in November, Graff said.

More information on the proposal is at mpls.k12.mn.us/calendar_survey.