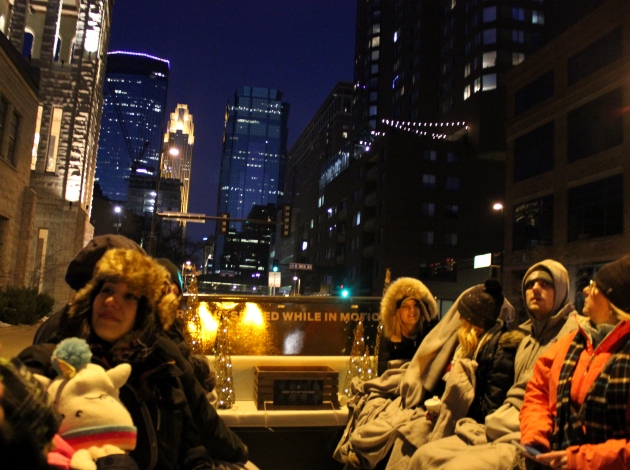 Holidazzle attendees take in skyline views during a sleigh ride through downtown.

The Minneapolis City Council passed sweeping policy guidelines Dec. 7 to allow more housing in every neighborhood and place racial equity at the front of city attention.

A Dec. 4 lawsuit filed by two environmental groups and a Fulton-based “Smart Growth” group pressed for an environmental review of the plan but failed to block the council vote.

“When you hear the differences of opinion of folks across the city, some of it is based on a really different experience of living in our city,” said Council President Lisa Bender, who was deeply involved in crafting the plan. “We have places of great wealth and privilege in Minneapolis and we have places of deep poverty. And those are often found along lines of race, the consequence of decisions that were made over decades to exclude people from neighborhoods in the city of Minneapolis.”

The plan guides citywide zoning changes. It lays the groundwork for a host of policy ideas to meet an 80 percent reduction in greenhouse gases by 2050. And it adopts strong language to eliminate racial disparities.

“That says that we are drawing a line as a City Council, that we are going to do everything that we can to no longer be the city that is known for being prosperous as well as one of the worst places to live if you are black or Native,” said Council Member Phillipe Cunningham.

In Southwest Minneapolis, buildings along Lake Street could rise two-six stories, increasing at areas like Uptown near Hennepin & Lake (2-10 stories), near the West Lake light rail station (10-30 stories), and near the Kmart site at Lake & Nicollet (4-15 stories). Zoning would allow 1-4 stories at intersections like 36th & Bryant and 43rd & Upton and along much of 50th Street. Some areas that would have allowed up to four stories in the prior draft were downsized to three stories in a new “Corridor 3” zone, including stretches of Bryant Avenue between 36th and 50th streets, some blocks along 44th Street & France Avenue in Linden Hills and portions of Penn Avenue south of 50th Street.

Find the revised Built Form map on page 74 of the plan.

While some council members expressed concerns about how density would impact housing affordability, they voted 12-1 in favor of the plan, saying they would closely monitor development and adjust as needed.

“I do worry that allowing for a major upzoning will have unintended consequences, especially in the areas of gentrification and displacement. Without question, developers are going to buy inexpensive properties, tear them down, build more densely and likely raise rents,” said Council Member Lisa Goodman. “…That is what the private market does, and I do have concerns about that and I think we have to be very conscious in monitoring that to make sure we don’t see increased displacement as well as gentrification.”

To help address that issue, the council simultaneously approved an interim “inclusionary zoning” ordinance to mandate affordable housing in new construction. Starting in January, the city would require projects of a certain size to make at least 10 percent of units affordable at 60 percent of the area median income, equating to rent of $1,062 for a one-bedroom apartment. City financial assistance would be available for projects that make 20 percent of units affordable at half the area median income, or $885 for a one-bedroom unit. Bender said that if such an ordinance had been in place in recent years, it would have produced as many affordable units as the city’s affordable housing trust fund. 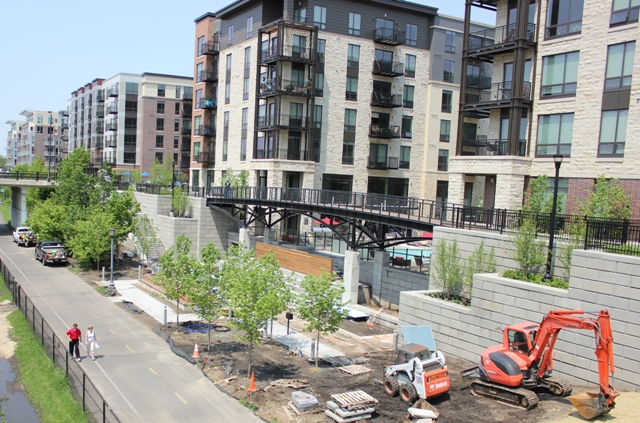 Bender said change would not happen overnight. In the four years since the city started allowing accessory dwelling units (or “granny flats”), she said about 100 have been built. And the process to rewrite the zoning code could take years, she said.

In shaping the final plan, council members’ policy ideas covered a lot of ground. They considered and rejected a proposal to penalize people who don’t recycle, worrying fines would hurt low-income people. They moved to pursue home energy-efficiency disclosures, perhaps tied to buying a house or leasing an apartment. While devoting land for higher-wage production and processing jobs, they thought about a potential cannabis industry. They agreed to continue funding neighborhood organizations while providing oversight of spending.

Some council members emphasized plans to set aside industrial land for production and processing jobs, an area that has shrunk over time but pays people of color double the wages of retail or food service jobs.

New “cultural districts” could aim to highlight the cultural identity of certain areas and work to prevent displacement. New “innovation districts” could experiment to tackle the city’s biggest challenges, from inequality to climate change. Another new policy area is dedicated to the Northside, with ideas for increasing homeownership, supporting small business, offering “right to return” support for homebuyers who were displaced, and addressing root causes of violence in a public health approach to public safety.

Citing demands on staff time, however, council members said they would need to prioritize and champion policy ideas to see them implemented.

The final plan offers a new approach to the Shoreland Overlay District, which regulates height and other design features near shoreline. Proposed by Goodman, the new language focuses on water quality and recommends that new small-scale residential building design be consistent with surrounding property.

Goodman said she voted in support of the plan as a result of revisions in her ward. Properties surrounding Cedar Lake, Lake of the Isles, West Franklin Avenue and West 21st Street were downzoned from the initial draft, among other changes.

Council Member Linea Palmisano, who represents Southwest Minneapolis, provided the lone vote against the plan. She said the city goals are right, but the strategy is wrong. The plan would make affordable housing in her ward harder to keep, she said.

“This is untested and the risk we’re taking is something that we can’t walk back. And I wish we’d have settled on something more incremental,” she said.

She suggested switching from triplexes to duplexes in the lowest-density zoning district, but the idea didn’t find support.

Bender said allowing triplexes is the most gentle change the city can make. Council Member Cam Gordon said a reduction from triplexes would exacerbate redlining and historic racial covenants the city is trying to correct.

“The goals are so high in this plan,” Gordon said. “…We want to make sure that as we move forward and change our city for the better, we’re also preserving what’s best and treasured most about it. I think the plan offers us guidelines and a pathway to do that.”

The Metropolitan Council, which required Minneapolis to adopt the plan to accommodate population growth, will now review the plan.