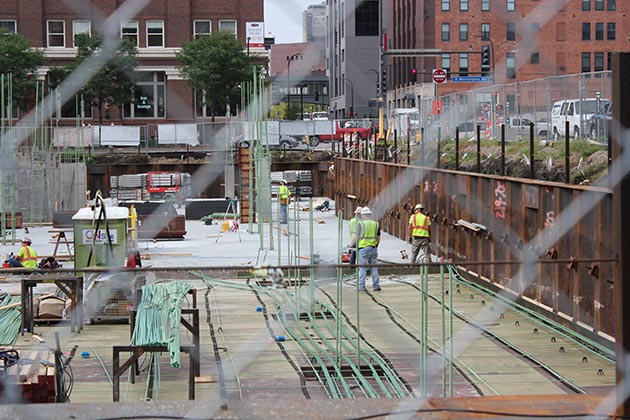 Twenty percent of the units included in the 205 Park project, under construction downtown by Sherman Associates, will be priced affordable to people earning 60 percent of area median income. New residential projects citywide could be required to include a portion of affordable units if the City Council adopts an inclusive zoning ordinance. Photo by Dylan Thomas

New multi-family residential projects built anywhere in Minneapolis would be required to include some units priced below the market rate if the City Council acts on the recommendation of a national affordable housing organization this fall.

That organization, Portland-based Grounded Solutions Network, was hired by the city to examine how Minneapolis might implement inclusionary zoning and its potential effects on the city’s housing market. Two of the organization’s policy experts offered a preview of their findings to the City Council’s Policy and Housing Development Committee in August, and they are expected to release a more detailed report in early September.

The council could vote on an interim version of an inclusionary zoning policy as soon as November while city staff spend another year hammering out the details of the ordinance.

“My goal with this policy has been to create one more tool that we have as a city to get affordable units,” said City Council President Lisa Bender, who first introduced an inclusionary zoning ordinance in January 2016, during her first term representing renter-heavy Ward 10. “I don’t think anyone should pretend, and I don’t want to pretend, that this is the overall solution to our affordability problem.”

Still, Bender said she expected inclusionary zoning, also referred to as inclusionary housing, to play an important role in helping the city to achieve the housing goals proposed in Minneapolis 2040, the 10-year update to the city’s comprehensive plan. The plan anticipates Minneapolis’ population continuing to grow from 416,000 residents today to 465,000 in 2040.

City Council members will also hear about alternatives to a new inclusionary zoning ordinance from groups like Building Minneapolis Together, a coalition of local for-profit and nonprofit developers that includes Steve Minn, a former City Council member who is now vice president and chief financial officer for Lupe Development. The group is pitching a menu of alternatives, including an “inclusionary development investment fund” that would generate income through a new tax-increment financing district. New affordable projects would apply to tap the fund, which would be administered by the city’s Community Planning and Economic Development Department.

Minn said a mandatory inclusionary zoning policy was “nothing but a tax on development” and warned it could lower profits enough to scare away the outside investors who fund new housing projects.

“That is a recipe for killing the goose that is laying the golden eggs here in Minneapolis,” Minn said.

Hundreds of cities and counties across the country have attempted to use inclusionary zoning policies to balance growth with affordability and respond to the community-altering effects of gentrification.

“Inclusionary housing is one of the few policy tools available to address racial disparities by creating and retaining mixed-income neighborhoods throughout a city as communities change,” said Stephanie Reyes, a specialist in state and local housing policy at Grounded Solutions Network.

Because they make new development more expensive, inclusionary zoning policies also come with some risk for the cities that choose to adopt them.

An inclusionary zoning policy can limit new development, constraining the housing supply and making a housing crunch — like the one Minneapolis is currently experiencing — even worse. Or it might encourage developers to skip emerging markets that need new affordable housing to focus on more expensive projects in the established markets that can demand the highest rents.

Curt Gunsbury of Solhem Companies, which has developed residential properties in Uptown, LynLake, Northeast and the North Loop, described himself as “agnostic” on the policy. Gunsbury said “the intentions are wonderful,” but he’s wary of unintended consequences.

“Minneapolis needs housing, right? So, taking away potential future supply may not be a good match for increasing affordability,” he said.

Minneapolis is attempting to strike a balance, requiring some affordable housing with every project, but keeping the requirements low enough that the policy won’t drive away developers.

The inclusionary zoning ordinance being written by city staff is expected to copy the model proposed by Grounded Solutions Network. It recommended a citywide program that offers developers two alternatives: 10 percent of a multi-family residential project’s units priced at a rate affordable to households earning 60 percent of the area median income or 20 percent of the units priced affordable to households earning 50 percent of area median income, with a city subsidy available on an as-needed basis.

Bender said a tax-increment financing district was the likely source of the city subsidy, although that remained an open question.

The proposal expands on an existing inclusionary housing policy that has been on the books in Minneapolis for 15 years. It at first applied only to developments of 10 or more units that received financial assistance from the city, but the definition of financial assistance was expanded to include pass-through funding. The policy was expanded again to apply to any project of 10 or more units built on city-owned land.

It may take another year to work out the details of the new inclusionary zoning ordinance, and a lot is expected to change in that time with the adoption of a new comprehensive plan. Members of the Policy and Housing Development Committee directed city staff to develop an interim ordinance that would require an affordable component from any project that seeks to go significantly bigger or denser than is allowed by right.

Bender said some cities “have really struggled” with managing the period between when an inclusionary zoning policy is adopted and when it goes into effect. She noted that Portland saw a surge of applications for new development after that city adopted inclusionary zoning but before the new rules came into play. That was followed by a slowdown in new applications, similar the scenario that played out after Chicago adopted its version of the policy in 2016.

With the interim ordinance, Minneapolis elected officials hope to avoid a similar situation.

“We have the benefit of learning from the experience of so many cities who have done this before us,” Bender said.

Gunsbury predicted the interim ordinance would have an immediate effect on most new residential developments. It could, he said, encourage developers like him to shift their work to St. Paul or the suburbs, at least for a while.

Minn warned that even the interim policy would “have the immediate effect of curtailing any project that is not closed and funded.”