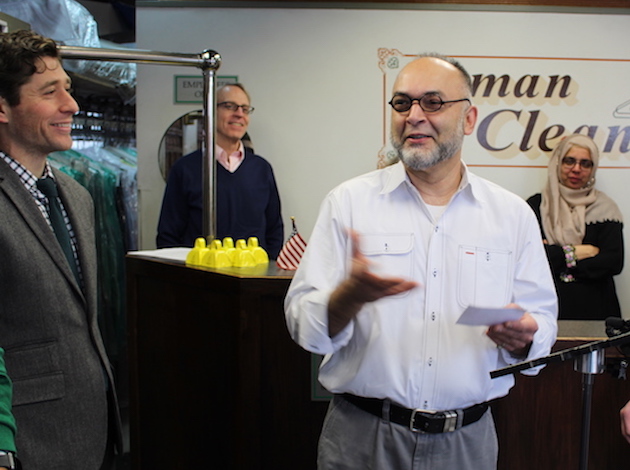 Minneapolis has become the first major city to eliminate use of the solvent perchloroethylene, or perc, according to city officials.

“This is a product we had to get rid of for the health and safety of Minneapolis,” Frey said. “I’m so proud that we are the very first city in the entire country to do so.”

Perc has long been recognized as an effective dry-cleaning solvent and is the most commonly used solvent in dry-cleaning shops, according to the U.S. Occupational Safety and Health Administration. But the chemical is a volatile organic solvent and may pose serious health hazards if not properly controlled, the agency says.

Dry-cleaning workers who routinely breathe excessive amounts of solvent vapor or spill perc on their skin are at risk of developing health problems, according to the agency. A City of Minneapolis video notes that perc is a neurotoxin that can cause problems such as kidney damage.

The biggest concern with perc is exposure within dry-cleaning facilities, according to Patrick Hanlon, director of environmental programs in the city’s Health Department. Concentrations of the solvent can be significantly higher within them, he said.

Minneapolis began efforts to eliminate perc use in 2012, when it developed the Green Business Cost Share program. Through the program, the city offers grants to businesses willing to invest in cleaner, greener or more efficient technologies.

The city’s first Green Business Cost Share grant went to Avestopolis Cleaners, a dry-cleaning business in North Minneapolis. It has since awarded dozens of grants, expanding them into the areas of energy efficiency and vehicle repair.

The city has offered dry-cleaning businesses up to $35,000 to purchase equipment that uses alternative solvents. New machines typically run about $100,000, Bender said, a cost that can be prohibitive for a small business.

Osman Cleaners utilized $20,000 through the city, another $15,000 through the Minnesota Pollution Control Agency and $5,000 grants from the East Isles Residents Association and the Lowry Hill East Neighborhood Association. Owner Arif Osman said he doesn’t think having the new equipment will cause his store’s prices to increase.

“It’s just a win for everyone,” Bender said of the conversion to perc-free equipment.

Minneapolis Health Department Commissioner Gretchen Musicant noted that perc was among the most prevalent volatile organic compounds found in a 2014–2015 citywide study of air quality. The study found significantly higher concentrations of perc near dry-cleaning facilities than farther way from them.