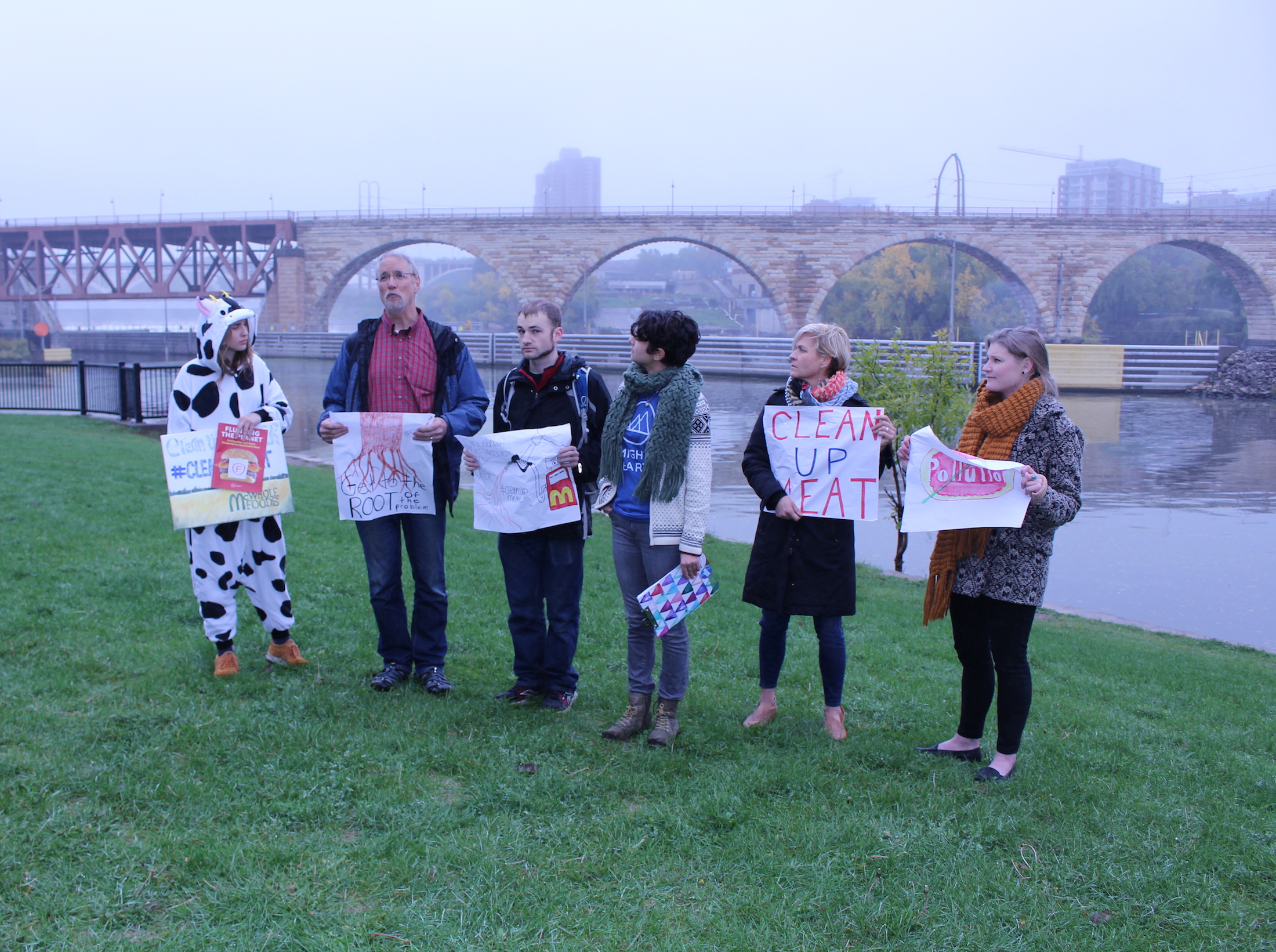 Activists with the organization Mighty Earth held a press conference on Oct. 10 to demand that large food companies clean up their meat supply chains.

A national environmental group demanded that McDonald’s and Whole Foods hold their meat suppliers to higher environmental standards during a series of press conference this month, including one in Minneapolis.

The organization Mighty Earth held a handful of press conferences around the country on Oct. 10, including one along the banks of the Mississippi River in downtown Minneapolis. It called on McDonald’s and Whole Foods to stop selling meat from Tyson and Minnesota-based Cargill, calling them “some of the most destructive and polluting companies on earth.”

“People want to buy responsibly sourced food,” said the field organizer, Mireille Bejjani, “and so we’re asking big companies like McDonald’s and Whole Foods to respond to this by investing in systems needed to produce sustainably grown agricultural products.”

The press conferences came as the organization released a new report detailing its research into the environmental standards the nation’s largest food companies require of their meat suppliers. The organization found that most of the 23 companies it surveyed have no sustainability standards for their meat suppliers in the areas of feed sourcing, manure management and greenhouse gas emissions. A handful of companies have greenhouse gas emissions-reductions goals, according to the report, but Mighty Earth criticized those goals for lacking detail.

“Clearly, far more needs to be done to curb meat’s environmentally devastating consequences on our food system,” the report said.

Mighty Earth researched a range of restaurants, grocery stores and food service companies for its report, including Chipotle, Subway, Costco, Walmart and Target. The organization says it’s highlighting McDonald’s and Whole Foods in its new campaign because those companies sell meat from Cargill and Tyson, two of the largest meat companies in the U.S.

Mighty Earth says that Cargill and Tyson are responsible for driving the destruction of rainforests in South America, water pollution in the Midwest and the dead zone in the Gulf of Mexico. It says those two companies have consolidated control over the meat market but have done little to date to improve their environmental impact.

“Since Cargill and Tyson aren’t doing what needs to be done, it’s critical that their major customers like McDonald’s and Whole Foods start requiring their meat companies to get serious about using sustainable farming practices to clean up meat,” Bejjani said.

Mighty Earth calls on the meat industry to implement farming practices such as cover cropping, fertilizer management, conservation of native vegetation and centralized manure processing. It says that these practices can help keep nutrients out of nearby waterways and prevent further deforestation.

She said over 1,000 people had signed Mighty Earth’s petition over the first six week of its campaign. The organization also has support from nearly 20 businesses in Minneapolis, including Wise Acre Eatery, Butter Bakery Cafe and Fig + Farro.

Becky Hill, vegan baker and social and communications manager at Fig + Farro, said her restaurant’s goal is to bring awareness to the fact that meat has a heavy carbon footprint.

Hill noted Minneapolis Mayor Jacob Frey recently issued a proclamation urging citizens to eat more plant-based meals in an effort to lower their carbon footprint. She also described an effort by her restaurant to host a monthly climate change salon and supper club where people can learn more about climate change issues.

Don Arnosti, conversation director with the Izaak Walton League of America, noted efforts in Minnesota to get Austin-based Hormel to take responsibility for cleaning up its supply chain. He said Hormel recognizes that the laws are too weak to protect water but that it’s not responding fast enough to pollution.

“We’re saying we’re not satisfied until the streams are swimmable, in terms of clean enough to be safe for swimming, which we’re far from right now,” he said.

Here is Tyson’s response to the report:

We’re committed to leading industry efforts to collaborate with farmers on environmentally responsible crop production. Earlier this year we committed to support improved environmental practices on 2 million acresby the end of 2020. This is the largest-ever land stewardship commitment by a U.S. protein company and represents enough corn to feed all of Tyson Foods’ annual broiler chicken production in the U.S., as well as some of the pigs and cattle the company buys from independent farmers and ranchers.

We’re making progress. This past summer we sponsored a summit that included more than 30 leaders of the corn supply chain, including professors from three major universities, representatives of the grain and animal agriculture commodity groups, seed and fertilizer dealers, the Environmental Protection Agency, the United States Department of Agriculture, the Environmental Defense Fund, and the Nature Conservancy.

These leaders, along with our internal subject matter experts, will be instrumental in helping us design a program to encourage corn farmers to adopt enhanced on-farm conservation through more efficient fertilizer use and additional measures to reduce soil loss.

At McDonald’s, we are committed to using our scale for good to create a food system in which people, animals and the planet thrive – and sourcing our food responsibly and sustainably is a critical piece of that commitment.

McDonald’s sustainable sourcing initiatives include conserving forests, beef sustainability and achieving our verified greenhouse gas (GHG) reduction target, which includes our beef, chicken and dairy supply chains. We are consistently engaging with our suppliers to communicate our expectations, as well as collaborating to accomplish these goals.