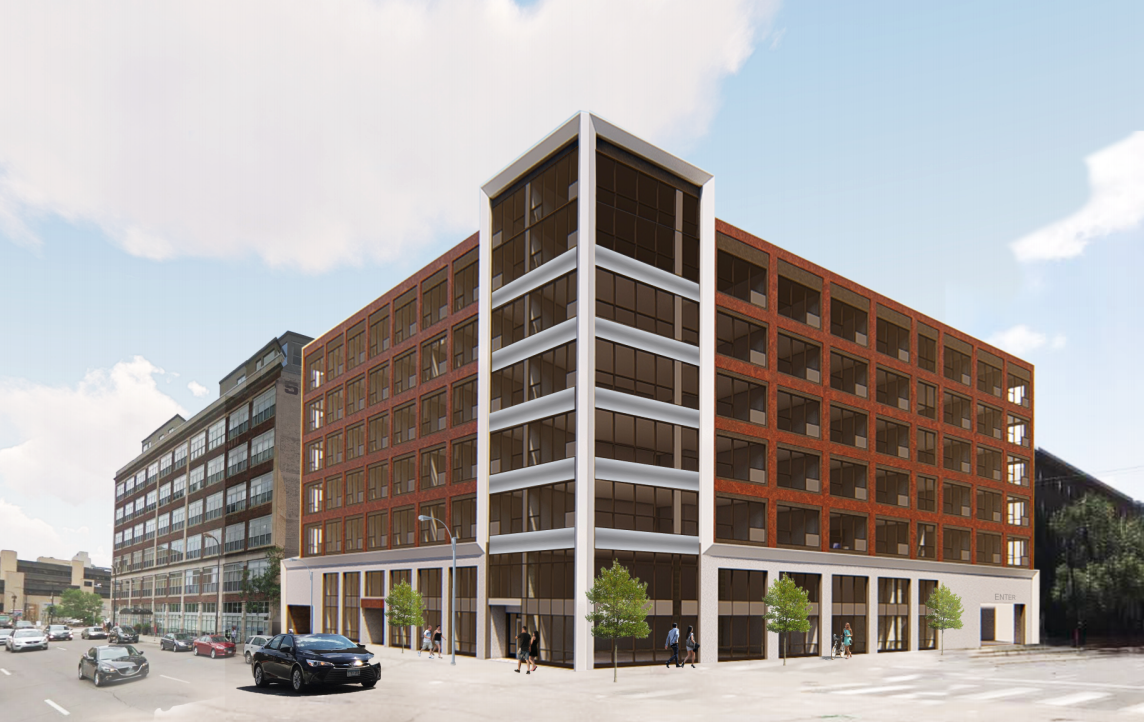 St. Paul Development Corp. is planning to build micro apartments in a new building that would complete the downtown block home to Sexton Lofts, House of Charity and Portland Tower. The Twin Cities-based developer submitted a preliminary proposal to the Planning Commission’s Committee of the Whole for a six-story apartment building with 175 micro apartments of 425–600 square feet, a mezzanine level with office space and a ground-floor restaurant. The project calls for a below-grade residential parking ramp with 63 stalls and 25 short-term parking stalls for visitors and restaurant patrons. The building would be built on the Smith Parking Lot at 5th & 7th, a corner that is seeing new construction on two other side of the intersection.

A 168-unit hotel will open this month on the Elliot Park block home to the new Kraus-Anderson headquarters, the 17-story HQ apartment building and the Finnegan’s microbrewery. The eight-story Elliot Park Hotel is part of the Marriott Autograph Collection. It features a lounge, event space, fitness center and meeting rooms. Tavola, an Italian restaurant with a pizza, pasta and steak menu, is located on the ground floor. Kraus-Anderson built the project, Coury Hospitality will operate the hotel and Wilkinson Corp. developed it. The Elliot Park Hotel will open Sept. 13 with a grand opening planned for Oct. 3, according to a release.

Twin Cities-based Roers Cos. plans to break ground this month on N&E, a five-story apartment building at 13th & Marshall in Northeast’s Sheridan neighborhood. The market-rate building will bring 93 apartments to a former used car lot. A 3,500-square-foot commercial space will provide room for a retail tenant on the ground floor. Roers plans to complete construction next summer. Rents for N&E will range from $1,275 for the building’s eight studios and $1,300–$1,400 for the 32 alcoves to up to $1,850–$2,485 for the 13 two-bedroom units. Nearly half of the building will be comprised of roughly 800-square-foot one-bedroom apartments with rents from $1,400–$1,725. N&E will have 53 parking spaces, a fitness center, a bike lounge and green roof.

In addition to N&E, Roers Cos. is building Mezzo, another market-rate apartment building along Marshall Street between 13th and 14th avenues. Mezzo, or “middle” in Spanish, is expected to open this November in a former vacant lot next to Dusty’s Bar. The 110-unit building will have about 1,000 square feet of retail space on the ground floor. CPM Development, now called North Bay Cos., led the entitlement process for both buildings and still owns the properties, according to Hennepin County property records. 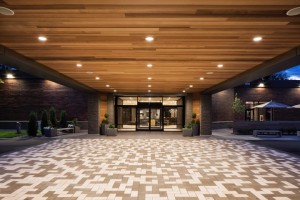 The former Ramada Plaza in the Mid-City Industrial neighborhood has gone through a $14 million renovation and is now under the Marriot Delta Hotels brand. Delta Hotels Minneapolis Northeast 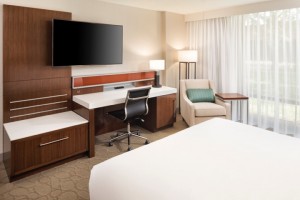 opened this year with 246 guest rooms geared toward a “streamliner” guest, or a frequent, tech-savvy traveler. The hotel features a 24/7 fitness center, the Twin Cities 400 Tavern on site and more than 10,000 square feet of flexible event and meeting space with bookings starting this October. Minnesota-based Scalzo Hospitality has owned the hotel since 2009. Delta Hotels is a four-star brand that was acquired by Marriott International in 2015.

Thrivent Financial has officially sold its 17-story office building to Hennepin County for a purchase price of $55 million, said Michael Noonan, county real estate manager. The sale, which the Hennepin County Board approved last year, was finalized in late August. Nothing will happen to the building until Thrivent finishes construction on its new corporate headquarters on the block immediately to the east of its current building. The non-profit firm broke ground on the new building in July. The county plans to consolidate offices scattered across several buildings into the new facility, freeing up buildings like the current Family Justice Center for the private market, possibly redevelopment. Along with the office tower, the county has purchased parking spaces in a mixed-use apartment building and parking ramp that’s under construction on a vacant part of the block.

Garden Communities, a real estate company associated with the owners of the Minnesota Vikings, is planning a 17-story apartment building at Park & Washington. Chris Palkowitsch, a senior project architect with Minneapolis-based BKV Group, which is designing the project, said the nearly 188-foot building would have 204 units and 4,000 square feet of retail space. The proposal would replace a surface parking lot, completing the block home to People Serving People American Trio Lofts and a condo building with Sawatdee on the ground floor. Principal Don Becker with the developer and BKV Group will present preliminary plans to the Downtown Minneapolis Neighborhood Association in September.

A proposal for a new apartment building in the Nicollet Island-East Bank from developer Curt Gunsbury of Solhem Cos. has received approval from the City Planning Commission via its consent agenda. Gunsbury is planning a 159-unit apartment building of seven stories to replace a used car dealership on Central Avenue Northeast. The market-rate building would have two levels of underground parking for residents and no commercial space. The Minneapolis-based developer plans to break ground this fall and complete construction in the spring of 2020. The plan required a conditional use permit to allow for seven-story height and a variance for a higher floor-area ratio. This is the developer’s second recent project in Northeast Minneapolis. Solhem is constructing The Julia, another market-rate apartment building, just south of Broadway Street Northeast on Marshall Avenue.

The Minnesota Public Utilities Commission voted to pull funds from an Xcel Energy grant to Crown Hydro LLC, which has been planning a hydroelectric power project on the downtown Minneapolis riverfront for decades. The firm had spent $1.5 million of the $5 million grant, which fell under the jurisdiction of the commission. Crown Hydro’s attorney Richard Savelkoul told commissioners that the project will not be “feasible financially” if the grant is terminated. One reason for the action was the company’s lack of control over the site, a piece of riverfront property owned by the Army Corps of Engineers. Government entities like the Minneapolis Park and Recreation Board and local groups like Friends of the Lock and Dam say the hydroelectric project would preclude other uses of the Upper St. Anthony Falls Lock and Dam infrastructure. 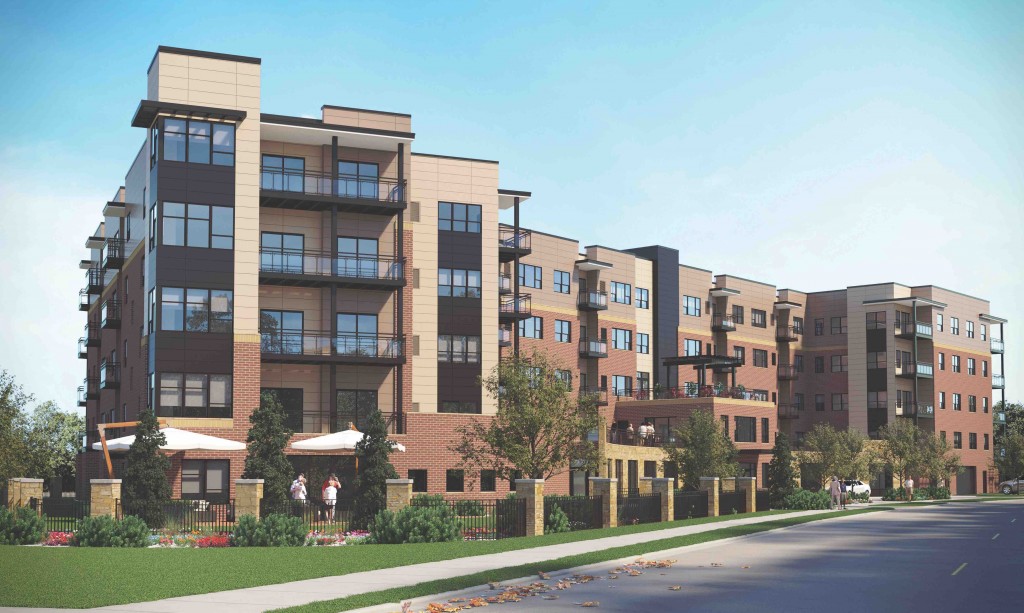 Catholic Eldercare is slated to open a five-story independent living community for seniors in Northeast Minneapolis this fall. The 62-unit Wyndris building is under construction along Broadway Street Northeast between 2nd Street and University Avenue in the St. Anthony West neighborhood. The senior housing and care nonprofit announced, as of Aug. 29, that 36, or about 52 percent, of the one-bedroom and two-bedroom apartments have been pre-leased. Amenities in Wyndris include an on-site café, a wellness center, an indoor dog run and a rooftop patio.