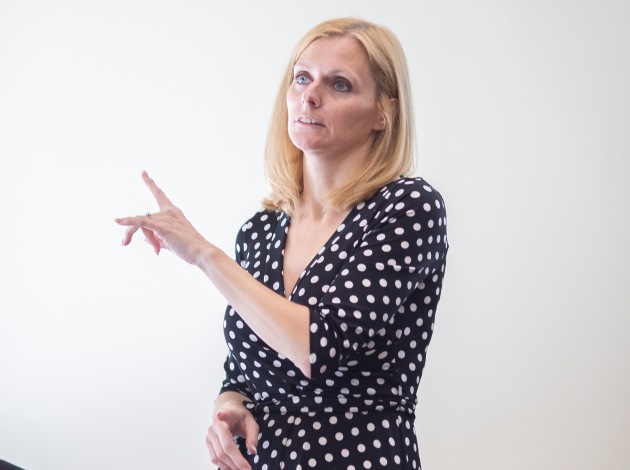 Becky Judd, a human resources consultant, trains bar and restaurant staff to be attuned to people who feel they are in danger. Photo courtesy Becky Judd

At The Pourhouse, ordering an angel shot with lime alerts staff to discreetly call a cab. An angel shot on the rocks brings an escort to safely leave the building. And an angel shot straight up calls the police. Signs in the bathrooms spread the word, and staff training aims to prevent violence.

Beyond the bars, average community members are encouraged to pay attention too. A community bystander intervention training is Nov. 13 at Jefferson School, taught by the Sexual Violence Center and organized by the Lowry Hill East Neighborhood Association.

“Think of a situation that haunts you. You just wish that you had done something and you didn’t,” said Kristen Houlton Shaw, executive director of the Sexual Violence Center. “…What could you have done?”

They challenge bystanders to get involved if they see something wrong. Houlton Shaw said that doesn’t mean wearing a superhero cape and confronting the aggressor, which can backfire. Better strategies include interrupting the conversation, slipping the victim a card, or figuring out a way to talk to the victim immediately or the next day, she said.

In the United States, one in three women and one in six men have experienced some form of sexual violence in their lifetime, according to a 2010-2012 survey by the Centers for Disease Control and Prevention. Houlton Shaw said it happens more than most realize.

“I know, because I work here,” she said.

Everyone thinks they’re a good person, and wants to believe people would turn to them for help, she said. But in reality, victims often don’t go to anyone for help, due to nerves, fear or shame.

“It can be so healing to have a stranger come up to you and say ‘Hey, that didn’t look okay to me. Are you alright? Can I help you?’” she said.

Houlton Shaw recommends taking cues from the victim to avoid misperceptions — a heated argument, for example, might not be a problem for everyone. But bystanders should pay attention if they see someone leading away an intoxicated person at a party.

“There are so many different manifestations of sexual violence in our culture, and the one consistent theme is that it thrives in silence,” she said.

Lowry Hill East volunteers are meeting with Uptown bars this month to gauge interest in joining the Safe Bars program. They are reaching out to other neighborhood groups as potential partners, and encouraging customers to ask about training at places they frequent.

“The idea would be to have a ‘Wedge Safe Bar’ or ‘Uptown Safe Bar’ sticker that bars can make visible to patrons, as well as an equivalency status for bars that already do this kind of training,” said Alicia Gibson, chair of the Lowry Hill East Community Life and Safety Committee.

The Safe Bars program, based in the D.C. area, trains staff to stand up against sexual harassment and assault, and it’s creating a team in Minnesota to train local venues.

Under a separate program at bars and restaurants including The Pourhouse, Mercado, Borough and Parlour, The Exchange, Monello and Constantine, staff are trained to be discreet and stay calm. If someone asks for help, staff alert security and work to remove the person from an offender’s line of sight, perhaps by drawing the victim away for a question about a credit card or drink order.

“I know it sounds kind of cloak and dagger, but it’s little nuances we can implement so they can walk to their car,” said Becky Judd, a human resources consultant.

She doesn’t worry too much about abusers seeing posters in the bathrooms and decoding the angel shot. Often, abusers don’t think they’re doing anything wrong and don’t make the connection, she said.

She said the angel shot has been requested about a dozen times in restaurants where she’s trained staff. One incident involved a serious domestic violence situation, others involved dates that weren’t going well, and another involved calling a cab for a woman who didn’t want to leave with her boyfriend.

“A lot of times they just want a cab home or want a walk to their car because for whatever reason they don’t feel safe,” she said. “…Protection is empowering. We’re here to help you, we’re not just serving food and taking your money.”