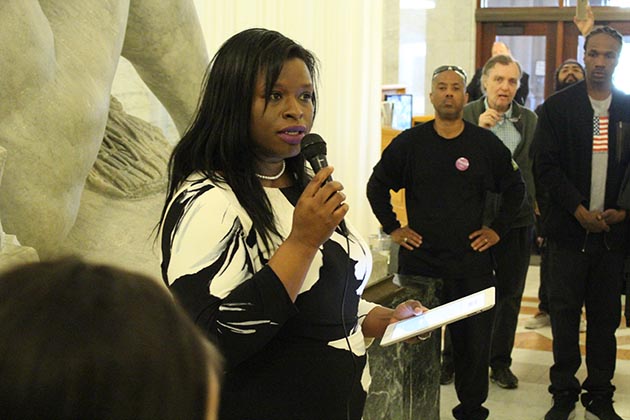 Mayoral candidate Nekima Levy-Pounds delivered a State of the City-style address to a group of about 20 supporters in the City Hall rotunda May 4. Photo by Dylan Thomas

In what was billed as a “State of the City” address, Levy-Pounds called for a “paradigm shift” in city leadership in front of a group of about 20 supporters who gathered in the City Hall rotunda May 4.

“I know that such addresses are typically reserved for the mayor of the city,” she said. “However, considering the dysfunction that we have been witnessing at City Hall in recent weeks and over the last nearly four years, I took the liberty of crafting this message to help redirect our city leaders, to sharpen our areas of focus and to remind us all that the people of this great city are the ones who suffer when our government is not living up to its responsibilities.”

A week earlier, Hodges had rejected Harteau’s choice for commander of the department’s 4th Precinct, which covers the city’s North Side. The fight over the appointment of Lt. John Delmonico played out publicly in news reports and in public statements issued separately by the two city leaders.

Delmonico, a former head of the police union, was a central figure in the so-called “Pointergate” episode of 2014, when he claimed Hodges flashed a gang sign in a photo with a campaign canvasser. In an interview after the speech, Levy-Pounds said Delmonico’s involvement in fueling the “Pointergate” story was “a slap in the face to the black community.”

“We need an inspector that knows how to reach the community, how to advocate for what’s in the best interests of the community and how to build trust with the community. Delmonico is not that person. Chief Harteau should’ve known that,” she said.

Levy-Pounds said after the speech she would replace Harteau if she wins the mayor’s race in November. Noting that news reports indicated Hodges initially supported Harteau’s pick, Levy-Pounds said it showed the mayor was “out of touch” with the city’s black residents.

Levy-Pounds focused a significant portion of her speech on the city’s response to crime, calling for a “genuine model of community policing that involves community members and not just the usual suspects and shared decision making about how our police will function.”

She said a “holistic” response to crime would involve both police reform and increasing access to educational opportunities, employment and affordable housing while raising the minimum wage.

“The problems are a symbol of broken social systems and government neglect of our most vulnerable populations,” she said.

Hodges is scheduled to deliver her own State of the City address May 23 at Masjid an-Nur, a mosque in Near North located about a mile from the 4th Precinct.