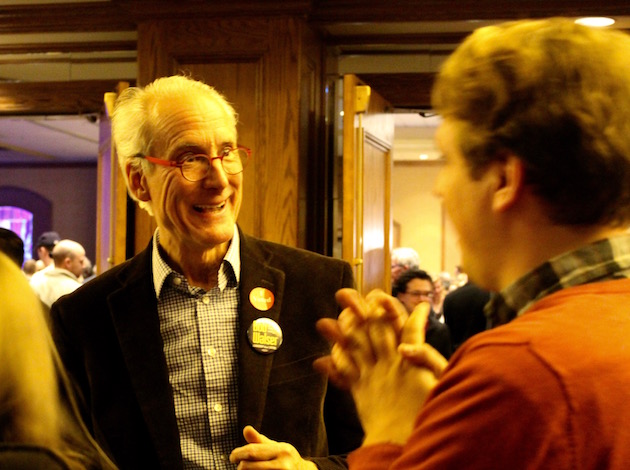 Bob Walser talks with a supporter at the DFL election party after winning his District 4 Minneapolis Board of Education race. Photo by Nate Gotlieb

DFL-endorsed candidates swept the four open Minneapolis Board of Education seats on Election Day, unseating two incumbents and thwarting a bid by a longtime parent-activist on the north side.

Jourdain touted his work on school site councils, and the district’s parent advisory council in his campaign as well as his experience working in human services. He campaigned on issues of equitable funding, wholistically taking care of children, transparency and accountability, saying to voters that he would “do the legwork and the footwork so you don’t have to.”

Asberry, a former MPS teacher who runs a youth-services nonprofit, said her priorities were accountability, community engagement, transparency, responsible relationships, racial equity and well-rounded education. She noted her work advocating on behalf of students and families as well as her role in the hiring process for Superintendent Ed Graff.

Walser, a longtime educator and musician who is married to an MPS teacher, ran on a platform of equity, recognizing students as individuals and keeping wealthy out-of-state donors out of the School Board election process.

Reimnitz, who works for a youth nonprofit, said he would continue to put students first and fight for equity, noting his work on a new policy manual that he said will help provide the board more structure and accountability.

Reimnitz and Asberry had both said they would abide by the DFL endorsement but later decided to run.

Several former School Board members who endorsed Reimnitz said they were surprised at how well he, Asberry and Caprini did despite their lack of DFL endorsements. DFL-endorsed candidates get party help with campaign literature, door knocking and phone banks, as well as a place on the party’s sample ballot.

“The DFL is, in Minneapolis, pretty trusted,” said former board member Judy Farmer, who endorsed Reimnitz. “A lot of times people who don’t know the individuals will vote for those people because of the DFL label.”

Former board chair Alberto Monserrate, who endorsed Reimnitz, said he was surprised this year by how few people this year knew there was a School Board race.

“I think we saw a year where a lot less money was spent and a lot less attention was put into the School Board,” he said. “That made the DFL endorsement that much more powerful.”

Monserrate said Asberry brought a commitment to racial equity to the board with an intensity that he didn’t see from anybody else in a long time.

“I think she will be greatly missed,” he said.

He praised Reimnitz for his ability to work with people who didn’t necessarily agree with him as well as his work on getting policies updated. Farmer said she thought Reimnitz always asked good questions and knew a lot about the board processes.

Reimnitz said he knew his race would be an uphill battle. He said he’s worried the board will have a continued focus on adult behavior rather than student needs.

He said he encourages folks in nonpartisan races to be critical thinkers, adding that it was energizing to him when people reached out to ask questions, even if they were tough.

“I believe I’ve established myself as a reputable individual, and that’s going to last longer than this election,” he said.

Minneapolis voters also voted to renew the district’s referendum, which was scheduled to expire this year. The revenue will help manage class sizes and provide support services and activities for students.

More than 83 percent of Minneapolis voters approved the referendum.

“We outperformed ourselves,” said Donald McFarland, who managed the Vote Yes for Kids campaign in favor of the referendum. “It’s obviously a strong message that Minneapolis values its public schools.”

“The vote tells us that our community remains committed to our students,” Graff said in a statement. “In the same way, we are committed to using public resources in the most effective way to continuously improve student achievement.”