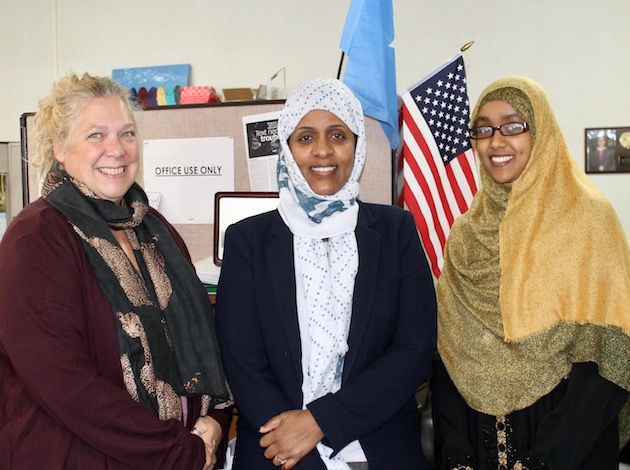 Fartun Weli (center) and her staff at Isuroon.

Isuroon is a hub for Somali women and their families

During her struggles to conceive a child, Fartun Weli tried with difficulty to find infertility resources in the Twin Cities that reflected her perspective as a Somali woman. So in 2010, Weli started the Isuroon infertility and health issues project to examine the effects of infertility on mental health and stress levels in Somali women.

“Somali culture highly values a woman’s ability to have children,” Weli said. “Women who are unable to bear children face high levels of social and emotional stress. I wanted to empower these women and to help them understand their worth beyond childbearing.”

The Isuroon project evolved into a nonprofit dedicated to giving Somali women in Minnesota the tools and resources they need to thrive. In less than seven years, Isuroon — a Somali word meaning “woman taking care of herself” — has created a health support network, developed an informational website and partnered with dozens of community groups, catering to the specific needs of female Somali immigrants. The organization also offers individual health counseling, food distribution, legal aid, education and job placement resources and referrals.

The need for resources in the Somali community in Minnesota is substantial. Census numbers put the state’s Somali population at about 40,000, although community activists have said it’s higher — and growing. And since men and older boys take longer to go through immigration screening processes, a majority of Somali households in the Twin Cities are female-led.

While its direct services such as health care counseling and food distribution are integral to the organization, Weli — an activist and public health graduate student with two decades of experience in the medical field— considers Isuroon’s work in public-health research and legislative lobbying two of its most important aspects.

Weli believes the wellbeing of Somali women depends not only on their physical health but also on the support of the broader Twin Cities community. Through its advocacy work, Isuroon introduced two bills into the Minnesota Legislature addressing health disparities and providing funding for Somali women’s health programs. Ahead of the recent election, the organization received a small grant to get out the vote within the Somali community.

Civic engagement is important to the Somali people, according to Weli.

“In Somalia, they understood that the political process affected every aspect of their lives,” she said.

Preventative health care is one of many challenges facing Somali women living in Minnesota.

“Prevention is not part of our culture,” she explained. “Even when they’re insured, Somali women have some of the lowest health care access. You see them end up in the ER with chronic illnesses, because it’s not a priority for them to go to the doctor when they’re taking care of six or seven kids on their own.”

After conducting education sessions that increased breast-cancer screening rates among participants, Isuroon is working to develop and test a culturally specific curriculum that focuses on cervical-cancer prevention, raises awareness of infant mortality rates and addresses the disparity in health care access for Somali immigrants from a public policy standpoint.

“The bottom line is health care access,” said Weli, “We can’t talk about upward mobility of Somali women if they’re not healthy.”

‘The pulse of the community’

During a recent food distribution event, which take place three Wednesdays a month at Isuroon’s Nicollet Avenue headquarters, volunteers took numbers and packed up food for a cluster of Somali women and children waiting in the lobby.

Isuroon’s food distribution is unique in that it adheres to halal (strict nutrition guidelines according to Islamic law). According to a 2010 Ramsey County Public Health report, foods specific to the Somali culture are often hard to find locally. While there are more than 300 food shelves in Minnesota, the Brian Coyle Center in Minneapolis is the only other food shelf in the state that serves halal food.

One of the volunteers assisting with food distribution that day was Leyla Ahmed, a volunteer with Isuroon since 2011. Many of the organization’s volunteers got involved after benefiting from its services themselves.

“When I first moved here, I didn’t know how to drive a car,” Ahmed said. “Fartun pushed me to get a driver’s license and helped me find work. I was able to save money, and bought a little car.”

Connecting Somali women with resources to help them become self-reliant is the underlying goal of Isuroon, said Weli, not offering handouts. She chafes at the stereotype that Somali immigrants are, as she put it, “leeches attached to the system.”

“The first generation of immigrants are always poor, so our job is to help families get on their feet,” she said. “There are things that are stacked against us — being new, being women, with high illiteracy and the language barrier — but the energy and drive is there,” she added, citing the nearly 160 small businesses in the Twin Cities that have been founded by Somali women.

“Isuroon is like the pulse of the community,” said Weli. “Our mission is to give Somali women the tools to be successful.”

Donate online. Funds help with the costs of operations and food distribution supplies.

Volunteer to help educate the Somali community and advocate for Somali women’s needs.

Contact local government representatives to encourage them to address the specific needs of Minnesota’s Somali community.

2 awards presented to Sen. John Hoffman (DFL-Champlin) and Rep. Glenn Gruenhagen (R-Glencoe) for their work addressing the unique needs of the Somali community in Minnesota in 2015