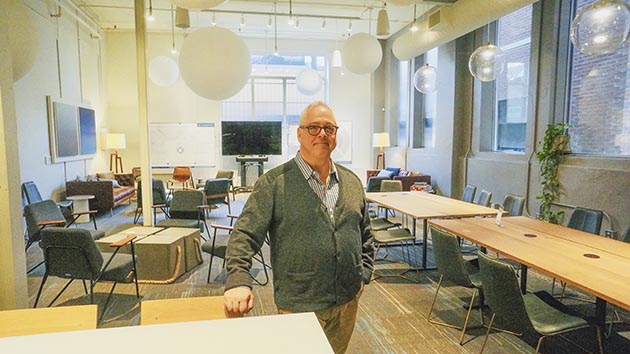 We have no science on this, but the betting is that pretty much everyone who is anyone (or wants to be someone) in Twin Cities business and government has met Nate Garvis, and that for sure all of them have heard of him.

A familiar figure and voice on the landscape for his 18 years as Target’s vice president of government affairs and senior civic officer, and as the protean creator of a series of programs focused on effective civic engagement, the engaging, voluble Garvis is, put most simply, “one of those guys.” Namely, a man with something to say, the energy to keep saying it until it sells and the personal appeal that not only convinces you but gets you to convince your friends that he’s on to something.

If you’re not (or not yet) a member of Minnesota’s machercrowd and haven’t kept up with Garvis’ now thoroughly established Studio/E, located across from Buca at 1128 Harmon Place, here are the basics.

A glib but fair description is that Studio/E is a membership networking organization of doers looking for ways to get even more done. You are also free to think of it as a 21st century remix of the Minneapolis Club model, only with less heavy woodwork and no assigned tables.

It’s a place where everyone is a first name, not a title, and where highly disciplined corporate officers who suspect there might be currents of creativity beyond what is preached in their boardrooms can interact with entrepreneurs, artists and politicians with informality.

Relaxed in Studio/E’s Clubhouse, a large, airy room with a bar (“I have a great collection of good Scotch,” Garvis said, mentioning something called Campfire as a worthy, peaty competitor for the likes of Oban), Garvis slid effortlessly into a presentation he’s probably given several thousand times but still sounds fresh.

Now seven years old, Studio/E is, he said, the result of a realization he and pal and co-founder Tom Wiese had while out walking in the mountains years ago. The realization was the remarkable number of people they knew like themselves: successful corporate officers, people commanding large staffs, responsibilities and compensation, who nonetheless felt there was something more out there. Better ways of getting important things done, mainly for their community. Things they were never going to get to via their regimented company system.

Moreover, Garvis and Wiese saw a need for what amounts to a mutual mentoring system, where established officers of name your industry could meet in a collegial, off-record environment with new generations of bright, motivated people, many without any aspirations to a corner office and a company stock plan.

For a fee that has now ticked up to $6,750 a year (“We offer structured payments,” he said, smiling), Studio/E members have access to four “cohorts” a year, mass gatherings where ideas, desires and issues are exchanged, vetted, imagined and, ideally, pushed forward with cooperation they could never have found anywhere else. (There are lesser levels of membership.)

Garvis frequently mentioned the country’s toxic political climate, rife with dismaying irrationality, and the effect that has on productivity of every kind, and primarily, in his focus, ways to make positive impacts on issues truly vital to a healthy community. The Studio/E pitch is that first you have to get smart people to act smart and talk to each other no matter what attitudes they carry into the Clubhouse or the salons Studio/E holds at different locations around the Twin Cities. (Garvis mentioned the James J. Hill library as one venue.)

It’s not clear what he would do to some local titan of industry who went full jerk at a cohort, but since he insists it has never happened, he can figure that one out later.

Studio/E’s staff of a dozen or so is guided by Stiles Anderson, the company’s president. The 30-ish Anderson joked that one of his primary responsibilities is providing “adult supervision” for Garvis, who clearly has an impish sense of humor.

Garvis smiled when asked about the office soundtrack, which despite the presence of a crew of millenials pecking away at terminals, is heavy on the Stones, The Doors, the Band and Bob Dylan.

“Yeah, I have some input. But a lot times I feed in covers and mash-ups,” he said. “Covers, you see, are a lot like what we’re trying to do here: Reimagine the classics, understand and appreciate what works well and give it a fresh spin.”