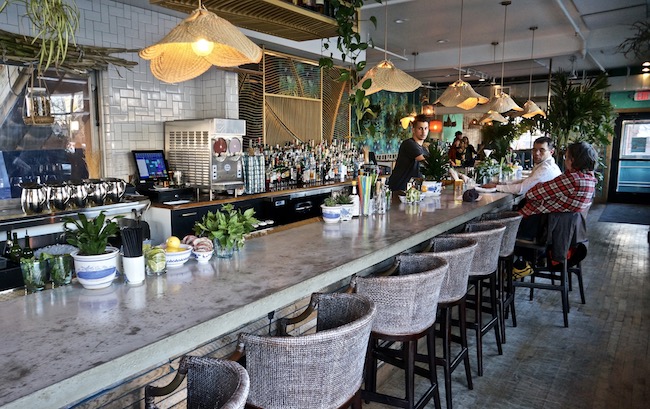 Hai Hai was heaped with accolades in 2018. Photo by Brian Lambert

Saying that Hai Hai, the Vietnamese street food restaurant that took over the space of a seedy old strip club on the corner of 22nd & University, has had a good year is, as understatements go, a bit like noticing Beyonce has a few adoring fans.

Opening in the chill of late 2017, the second restaurant from the husband-and-wife team of Birk Grudem and Christina Nguyen (Hola Arepa in the Lyndale neighborhood is no. 1) was barely six months old when Eater’s roving restaurant critic Bill Addison declared Hai Hai one of “The 18 Best New Restaurants in America.”

Said Addison, “With hundreds and hundreds of meals under my belt over the last year, it felt momentous when a meal distinguished itself as uniquely special, in moments where undeniable skill articulated the emotions and the ideas behind the food: when the details culminated into an intoxicating broth, or a singed slab of beef smeared with garlicky chile paste, or a banana blossom salad trumpeting 10 kinds of crispness.”

He went on to say, “Chef Christina Nguyen opened Hola Arepa with her bartender husband Birk Grudem in 2014, doling out easy-to-love sandwich versions of Venezuela’s ubiquitous griddled corn cakes. Their second venture, though, is Nguyen’s breakthrough restaurant. … So much about this place uplifts: the beachy wallpaper prints, the citrus-fueled cocktails, and a confident, effervescent staff. But Nguyen’s stirringly personal food gives Hai Hai its depth of spirit.”

By that point Hai Hai had already picked up rapturous reviews from local critics and foodies, many as delighted by its cheery, bright decor, open-air deck and generous array of palms as Nguyen’s cooking and Grudem’s drinks menu.

Swooned Hannah Sayle at City Pages in late May, “With their second restaurant, Hola Arepa and Hai Hai owners Christina Nguyen and Birk Grudem have shown a shrewd, near-scientific grasp of how to make a restaurant go. Here we are, blissfully munching on crispy fried tofu with a creamy lime leaf sauce and swirling the lychee in the bottom of our sangria as if this tropical oasis had just sprouted from the concrete. Of course it didn’t. Meticulous planning and streamlined logistics turned this former strip club, 22nd Avenue Station or ‘the Double Deuce’, into a lush indoor paradise and bustling patio, where the drinks are swift and the food is too.”

Adding, “The drinks menu could warrant its own article, from the refreshing Indeed Bia Side, brewed specially for Hai Hai with lemongrass, citrus, and ginger, to my new favorite bloody Mary in town, lifted up from brunch banality by carrot juice, ginger, and fish sauce. … The menu also features at least two time-saving tricks from Hola: a batch-made sangria and whirling vats of boozy slushees.”

In other words, a steady stream of wet kisses.

But then, as a kind of a holiday season capper to their first year, Esquire magazine’s Jeff Gordinier wandered into town and placed Hai Hai at no. 9 on a list of the year’s 20 best new restaurants nationwide.

Wrote Gordinier, “True story: As I stood outside Hai Hai in early spring, a truck sped by on University Avenue and sprayed me from head to toe with dirty snow and gutter water. It’s a testament to the sunny energy of Hai Hai that I didn’t care. By then I’d been filled up with chef Christina Nguyen’s water fern cakes; her fried wontons, all melty inside with cream cheese and chicken livers; her showstopping Balinese chicken thigh under a roof of crispy skin and on a bed of coconut-creamed jasmine rice. Banana blossoms, sugarcane, sticky rice, and green papaya — Nguyen’s menu reads like a street-smitten ode to Southeast Asia, a pop song that can brighten up even the murkiest of days in L’Étoile du Nord.”

Clearly, the critic gods were smiling.

For his part, Gordinier added the spritz of fresh whipped cream to the top of his rave, calling Nguyen the country’s “Rising Star of the Year”.

“After I ate at Hai Hai, I search-engined Nguyen; I knew zilch about her, at that point, and I figured she must have a résumé that name-checked some of the top restaurants around the world. I was wrong. She got her start running an arepa truck. The deep understanding of flavor that she displays at Hai Hai is the result of life experience and raw talent, not some tony pedigree. In an age when far too many young chefs are phoning it in with beet salads and predictable globs of burrata, Nguyen cooks with a fresh vantage point on what it means to feed the people.”

When we stopped by recently, on a cold weekday afternoon, literally as Hai Hai opened for the day at 3 p.m. the customers numbered only a dozen.  We asked the manager on duty— neither Nguyen or Grudem were on site yet — what the Esquire tout had done for business the previous weekend?

“Oh, people were talking, so it helped, no doubt,” the manager said. “But of course it snowed most of the time. But we’re thrilled.”