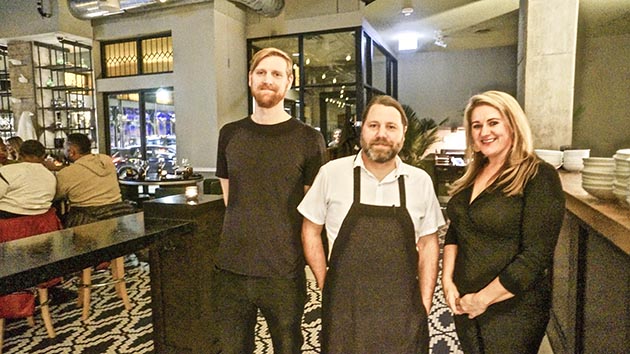 As pop stars and tech companies will tell you, reinvention is key to long-term survival. Your first idea may not be the idea that paves the road ahead.

Eastside, an upscale-casual bistro at 305 S. Washington Ave., across from the Milwaukee Depot, opened three years ago, and thanks in part to the presence of Ryan Burnett, of the well-known Burnett family, earned quite a bit of buzz. Everything about the space and service was tailored to meet the expectations of a downtown business clientele, along with the steadily growing population of residents filling developments on the north edge of downtown’s central core.

But traffic waned. The heat of the restaurant and bar scene was to the west in the North Loop or the east in the Mill District. A change was needed and it came in the form of Jamie Malone, the woman who had turned the Grand Cafe in south Minneapolis into a winner.

Malone was only a part of the first Eastside iteration, but for the reinvention she would be the signal caller. Partnered with Dennis Monroe from the Grand, she began an incremental makeover of the decor and menu, with “family-style” food and a long selection of exotic cocktails, all melded in a vibe the publicity sheet calls “’90s glamour.” If you’re not exactly sure what that means, the effect comes with moody lighting and elegant trappings.

Malone’s sister, Bridget, was running the shop the early evening we stopped in. Her chef, Ryan Cook, and mixologist Ambrose Burke took a few minutes to join her in Eastside’s private, glass-walled dining room.

Cook, a veteran of a dozen kitchens around the city, most recently a seven-year stint at Sea Change, explained the menu evolution as a move toward “larger format dishes”: shareable items like whole roasted duck and rib-eyes that entire groups can taste instead of just small-plate or amuse bouchechoices.

If you’ve had the roasted chicken at Grand Cafe, that cooking technique is being applied to the duck at Eastside. (It comes with Chinese mustard and pancakes.) Likewise, there’s a whole roasted bass plumped up with pork cheek, brown butter, caper berries and sunchokes.

“The plan is to continue to grow in that direction,” he said.

Burke is in charge of the Spinzall, the centrifuge-like gizmo that blends all cocktail ingredients to the same reliable level of perfection (he says). One of Eastside’s signature servings is a batch cocktail, processed through the Spinzall and delivered to your table in a silver service swan, for sharing.

To emphasize, the Spinzall is all about ideal blending and consistency. It’s disappointing, says Burke, when a customer, delighted by a drink on his or her first visit, finds the taste or texture “off” the next time they stop in.

Asked if James Bond would approve of this style of martini mixing, Malone laughed and said, “I’m pretty sue he’d approve when he tasted it.”

Burke added, “What we want to do is offer drinks that are unique but not overdone. We’ve all been to places that offer cocktails that sound interesting but are just, you know, weird to the taste. Our idea is creating drinks that are both balanced and accessible.

“We’re still doing a lot of R&D. But riffs on the classics are the staples. That’s where consistency is so important.”

He then launched into a description of a pomegranate mezcal.

Malone said that to date only modest changes have been made to the décor. The space on the glass-walled ground floor of the Latitude building can seat up to 120 in the main room with perhaps another 20–30 in the private dining area, which she said had proven quite popular for business gatherings. (Cook says the team is working on special promotions for Latitude residents.) Tile nerds will admire the artful work on the flooring.

Maximum capacity is in the 220 range. Malone’s staff is currently around 40.

As for what didn’t work the first time, Malone and Cook pointed out that the original debut coincided with the “massive construction” on Washington Avenue, which created a pretty daunting no-go zone for anyone driving into the area. (There is entirely reasonable valet parking at the Latitude).

It goes without saying that this incarnation of Eastside — which opens daily at 5 p.m.; no lunch service — will require developing both the patronage of downtown business clientele as well as that of the immediate area’s growing residential base. Both groups have no shortage of options — up and down the price scale — but Team Eastside, aware of the competition, is making a committed effort to turn this reinvention into the one that sticks.