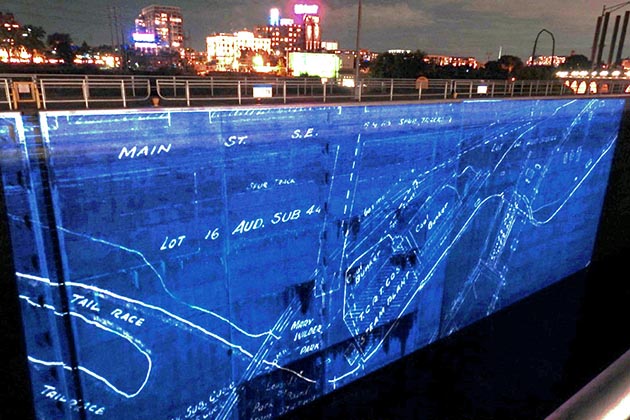 Andrea Carlson’s latest public art project picks up on themes in a previous work you may have seen as it shuttled between Minneapolis and St. Paul earlier this year.

Carlson had been impressing Twin Cities gallery-goers with her spectacularly detailed, panoramic drawings for years before this spring, when she was commissioned by Northern Lights. mn to create a full-color wrap for a light-rail vehicle. The piece, which included native imagery and phrases celebrating the importance of water in both Dakota and Ojibwe, traveled up and down the METRO Green Line to mark Northern Spark, Northern Lights.mn’s annual all-night arts event.

Carlson, who is Anishinaabe, debuts another major public art project in late September at the Upper St. Anthony Falls Lock and Dam. Along with Aaron Dysart, she was one of two artists chosen work with the recently decommissioned lock.

The lock closed to navigation in 2015 as part of a plan to block invasive carp from traveling further up the Mississippi River. The closure ended 52 years of service for the lock, which opened Sept. 21, 1963.

For a few hours after sunset on Sept. 29 and 30, the lock’s nearly 50-foot-tall walls will serve as a massive movie screen for “The Uncompromising Hand,” Carlson’s animated meditation on the history of Spirit Island, which was quarried and dismantled over seven decades, in part to widen the river channel for barge traffic. Carlson spoke with The Journal about the project two weeks before it went on view.

The interview has been edited and condensed.

The Journal: How did you first learn about Spirit Island?

Carlson: I went to undergrad at the University of Minnesota in art and American Indian studies, and someone had mentioned to me that there was an island that used to exist right off of the Stone Arch Bridge on the Mississippi River.

So, I looked it up and found a few pictures of it, and ever since then — that was probably in 2000 — every time I go across Stone Arch Bridge I look for it. I don’t know if that makes any sense, but I look in the water and I try to imagine it in the water.

My initial proposal for the project was to project onto the water where it used to be, its footprint, or to make something where we could all visualize my fantasy, my 17-year fantasy, now.

They wanted to use the lock and dam, though. It’s part of that decommissioning of the lock and dam, is to utilize the space publicly — pretty much making the lock a gallery. So, I changed the proposal to projecting maps and Ojibwe, Dakota and English texts scrolling across the wall, and then images of Spirit Island and all of its different forms, because it changed over the years.

What did you learn about its significance to native communities that lived in the area?

Well, we’re on Dakota land. Minneapolis and St. Paul is Dakota. The Ojibwe arrived later through our Great Migration, but it was ahead of white settlers. When white settlers moved in — westward expansion — it put pressure on a lot of tribes to push their territories westward, so the Ojibwe pushed into the Dakota land. That’s why there are reservations in Minnesota, and that’s why we have so many Anishinaabe people in Minneapolis.

Like my train wrap project that I also did with Northernlights.mn and Northern Spark, (this is about) bringing two sides together, the Dakota and Ojibwe, in our solidarity. I’m not necessarily trying to tell the story of Spirit Island but just bring up and acknowledge that it exists, and we have this shared history of losing sacred spaces due to the hand of industrialization, due to just trying to wrangle nature — as westward expansion did to everybody, to ourselves and the natural spaces.

The island was finally slowly quarried and dredged because the boats needed a straight shot to the lock and dam, and the island was in the way. When the island was cleared out, it made for a deeper trough in the river for the boats to get through.

In your project proposal, you cited a Jan. 7, 1900 Minneapolis Tribune article about the island disappearing by the “uncompromising hand of man, to make room for the (paddle) wheels of progress.” What did you learn about how early Minneapolitans viewed Spirit Island, or did they even think of it much at all?

You think about that, how people have memories of this place that is no longer there, and it’s not just native people. It’s people from Minneapolis at that time.

Now, I’ve never seen the island. I think it was fully taken out by the mid-’60s. That’s pretty late in the game. They started taking pieces of it in the 1880s or 1870s. They started destroying it then, but it took decades for them to fully commit to destroying the island.

You also wrote in your proposal, “It is important that this film not be understood as lamenting the past.” What did you mean by that?

This might just be a nuance of my politics, but oftentimes whenever you bring up people of color or natives, especially natives, we’re supposed to be in the past. We’re supposed to be at the end of the trail, on a horse, riding off into the sunset, like that (James Earle) Fraser sculpture (“End of the Trail”). We were supposed to have accepted our demise and gone away, but we survived.

And so, a lot of people, they don’t know what to do with that. Our lives past survival just become tragic. It’s just kind of a lamenting. It’s always that we’re at the receiving end of the abuse of the settlers.