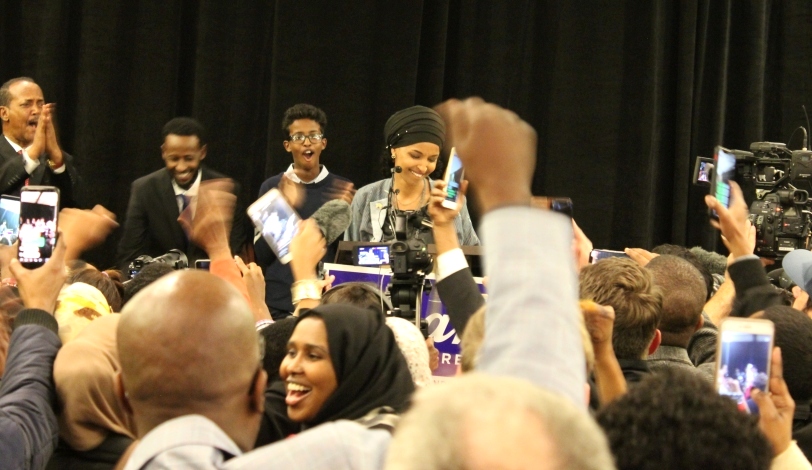 “Here in Minnesota, we don’t only welcome immigrants, we send them to Washington,” said Congresswoman-elect Ilhan Omar, closing her acceptance speech with the song “Girls Like You,” a nod to her music video cameo.

The song is fitting for Omar, who proposed amending the Minnesota Constitution to add gender equality under the law, and says she was raised by “crazy feminist men” who never paid much attention to Somalia’s traditional gender roles. 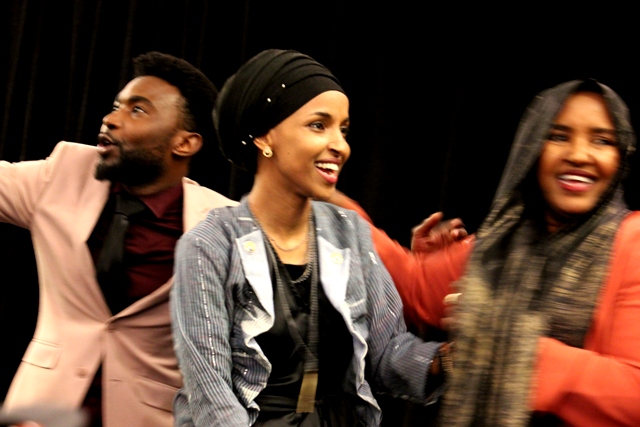 “She’s the American dream. She’s an inspiration for all of us,” said Aboubaker Hassan, an immigrant from Djibouti in the audience. “She kind of reminds us there is still hope in this country.”

When Omar’s mother was born in Somalia, neighbors came to give condolences. A firstborn daughter traditionally wasn’t cause for celebration, Omar told St. Joan of Arc Church in February. But her grandfather wouldn’t hear it.

“My grandfather told the visitors that his daughter was going to be better than any son that they will raise,” Omar said.

Her mother’s first job was assistant to the minister of petroleum, Omar said, and she later became a department director.

“[My grandfather] instilled in her this feeling, this desire to prove everyone wrong, to know her worth and to know that she had a place in the world,” Omar said.

Omar never knew her mother. Her mother died shortly after giving birth to Omar, her seventh child. But Omar was close with her grandfather, who called her in as she prepared for school each day. He repeated a story of the mythical “araweelo,” the revered queen of a kingdom in which all the leaders were women, and all the peasants were men. The queen was a tiny person with a powerful presence, and her grandfather told her to “take on the day like an araweelo.”

Omar was eight years old and living in Mogadishu when civil war broke out in Somalia. One night militia members attempted to break into their home and kill the men in the family, she said. Her sisters recognized the men’s voices, realized they were schoolmates, and convinced them to leave.

They escaped the country in the middle of the night, arriving months later at a refugee camp in Kenya. The camp had no school, no sanitary system and no running water, Omar told the Inver Hills Community College in a keynote last year. (Omar served on a higher education committee in the state legislature, and said in a statement to news media that she would repay speaking fees for the event.)

Omar’s family lived in the camp for four years. Her grandfather held out for a sponsorship to the United States, repeatedly turning down offers from other countries.

“He believed the United States would be the only country that would allow his grandchildren and his children the opportunity to one day be of the people,” Omar said in February. “To feel like they belong.”

Arriving in Arlington, Virginia as a sixth grader,  Omar said she was disappointed to discover a disconnect between American ideals and American reality. Caste and privilege weren’t supposed to matter here, she said, and everyone was supposed to have opportunity.

When she accused her family of lying to her about America’s promise, they countered that all progress must come from hard work.

“We can drown in the misery, we can feel hopeless, we can complain, or we can take some action and decide to partake in making our societies, our environments better so that it lessens the struggles for someone else,” she said.

She started school with two English phrases: “hello” and “shut up.” Her father urged her to master the language as quickly as possible, and she became fluent in about four months.

“He would say, ‘When you can talk to people, they would finally see who you are,’” she said.

Her family eventually moved to the Cedar-Riverside neighborhood, where Omar absorbed her grandfather’s interest in politics, translating the local DFL caucuses for him at age 14. Her first community organizing work took place as a student at Edison High School, where she assembled a group of people dedicated to unity and diversity who met every Monday and shared a meal.

She started working at age 16, taking jobs as a cashier, office cleaner, security guard (“if you can believe that,” she said) and working the night shift at the post office with her dad.

Using money fundraised in car washes, Omar and her father traveled to East Africa to help deliver aid in the midst of the Somalia famine in 2011. Speaking of the experience in 2015, she said the nation must reduce dependency on fossil fuels and become better stewards of the environment.

Prior to public office, Omar worked as a nutrition educator, as a Humphrey Policy Fellow and as senior policy aide to Council Member Andrew Johnson. She said she used her time at City Hall to advocate for the expansion of restorative justice, which gives offenders a chance to seek restitution by meeting with people impacted by crime. And she pushed to allow Minneapolis restaurants to stay open later during Ramadan, so people fasting could enjoy a meal after sundown and businesses could better survive the season.

In an interview, Council Member Johnson said it’s been “surreal” to watch Omar’s journey from policy aide, to state representative, to Congress.

“Anybody who thinks this is just about the fact that she’s the first Somali woman, or the first refugee, doesn’t know Ilhan,” Johnson said. “But she’s also somebody who if you strip that symbolism away, has  tremendous ability to bring people together, to build coalition and consensus.”

Omar has said that’s why she ran for state representative. Although she said incumbent Phyllis Kahn’s 44 years of service paved the way for her, and she had worked on challenger Mohamud Noor’s campaign the year prior, she decided to personally run because of her fluency with all communities.

“I realized that when we have new voices in the room, that we’re able to dream and we’re able to make big changes,” she said in her kick-off speech for state representative in 2015. “But that’s not true at the Capitol. The same people have been making decisions at the Capitol for a real long time.”

As a state legislator, she spoke against the administration’s travel ban impacting countries including Somalia. She described anxiously standing at the airport as Immigration and Customs Enforcement rechecked passports in 2017. When Omar landed, she said she posted on social media: “They let me back in.”

Omar participated in a 24-hour sit-in on the House floor to protest lack of action on gun violence, supporting bills that would have required background checks in gun transfers, furthered gun research, and allowed police or family to petition the court to prevent individuals who pose a danger from owning guns. After legislators tabled gun bills, Omar said she was proud to see students walk out of class and march to the Capitol for action.

Omar was chief author of bills to eliminate the statute of limitations for sex offenses, require a counselor in every school, prohibit state and local governments from acquiring military-grade weapons, and make Minnesota a sanctuary state, although none of the aforementioned bills gained traction in the legislature.

In her 2018 campaign, Omar’s campaign team said that for every dollar spent on advertising, they spent four dollars on the field program to directly connect with people.

Omar ran on a platform of single-payer health care coverage for all, a higher national minimum wage, access to tuition- and debt-free college, the abolition of U.S. Immigration and Customs Enforcement and expanded admission of refugees.

Succeeding Keith Ellison to the seat, she was elected to Congress with 78 percent of the vote, defeating Republican Jennifer Zielinski, who received 21.7 percent of the vote. In a social media post congratulating Omar, Zielinski wished her luck with the Minnesota Campaign Finance Board, alluding to an investigation related to Omar’s out-of-state travel.

“When the call came for me to run for Congress, I answered, because the time demanded it,” Omar said in her acceptance speech. “A time when racism and white supremacy threatens our very existence, when my status as an immigrant, black, Muslim woman means the administration does not see me as an American. You know I will not bow down. You know I will not back down to fear and hate. I will stand strong with you.”

*Historians point to refugees that preceded Omar in Congress. They include Tom Lantos of California, who came to the U.S. as a Holocaust survivor. Anh Cao is a refugee from the Vietnam War, and Ileana Ros-Lehtinen fled Cuba. Samuel Gejdenson was born in an American displaced persons camp in postwar Germany. And 19th and 20th century Members emigrated from Ireland during the Great Famine.