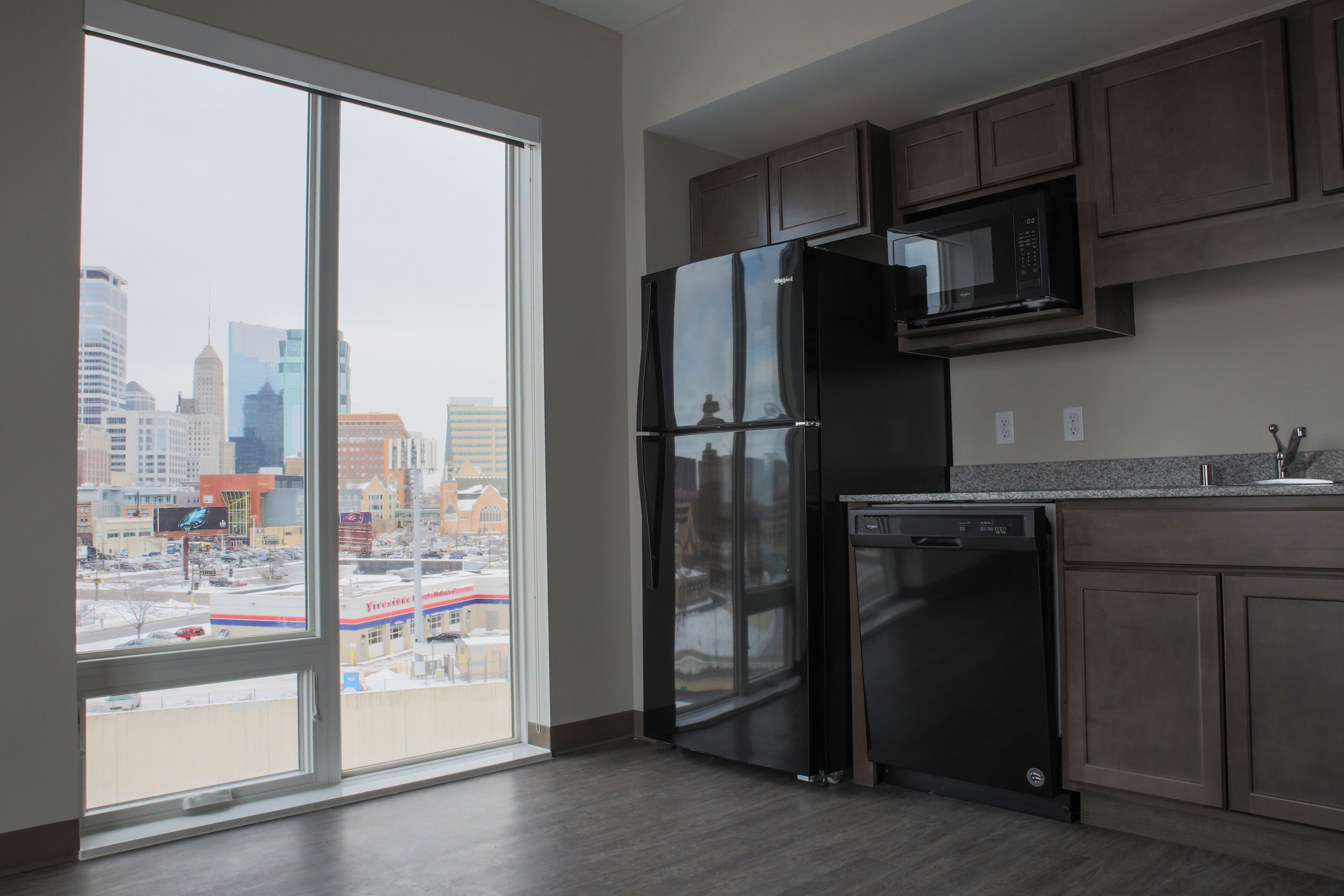 The view from a unit inside Downtown View, a homeless and at-risk youth housing project developed by Project for Pride in Living in partnership with YouthLink near downtown Minneapolis. Photo courtesy of YouthLink

Heather Huseby rattles off all the ways YouthLink’s drop-in center helps 2,000 young people each year, from connecting them to schools to feeding them hot meals. But housing on site? It’s a first for the organization, as well as downtown Minneapolis.

The nonprofit has been a daily sanctuary for youth ages 16–24 for decades, but over the past few years it has worked to expand its campus near downtown Minneapolis to help transition young people experiencing homelessness into adulthood.

Its goal? To create an $11 million housing project to serve as an incubator for young people to turn their lives around before they become ineligible for services and possibly long-term homeless adults.

YouthLink and its development partner Project for Pride in Living (PPL) broke ground last spring on a five-story expansion that will add 46 units of affordable housing to its campus. The project, dubbed Downtown View, is a unique model of housing that combines dorm-style living with the organization’s career, education and mental health services.

The project will take in young people ages 18–24 who are homeless and give them the time, space and resources to accomplish their goals, whether that means recovering from trauma, saving money or finishing their education. Meanwhile, tenants are encouraged to find employment and pay a part of their income as rent.

“We’re ground zero for every inequity (and) disparity gap in this population that you can think of: race, education, employment, housing, health disparities, everything. We’ve got it right here in this population,” she said.

Lisa Goodman has done her part to relocate a cellphone tower, convince transportation officials to sell land and bake cookies for YouthLink fundraisers in order to help Downtown View become a reality.

“I have pretty much given blood to help them problem solve,” said the Ward 7 City Council member. “In the 20 years (I’ve been on the Council), this is the most involved I’ve been on a personal level.”

Her role in the project started five years ago with a disagreement on whether YouthLink should create a shelter space or, as Goodman said, think bigger. Instead of another temporary solution in her shelter-dense ward, Goodman connected YouthLink with PPL to dream up a new, permanent youth housing development.

“I just really felt the indignity of young people being kicked out of their homes or having to flee their house due to an unstable home situation demanded a solution that was as permanent as possible. Mats are Band-Aids,” she said.

It took PPL, Goodman and their partners about four years to finance the project. Abbie Loosen, who managed the project for PPL, said it isn’t rare for affordable housing projects to take much longer.

About $9 million of the project’s budget came from competitive 9 percent Low-Income Housing Tax Credits, which states and sub allocators like Minneapolis award based on factors like location and transit access. Loosen said Downtown View scored high because it targets an under-served category and because of an efficient design without parking.

About 10 percent of the funding came from the city’s Affordable Housing Trust Fund, which is capped at $25,000 per unit. Other sources include the Metropolitan Council, Wells Fargo Housing Foundation and Hennepin County.

Financing affordable housing is bit of a chicken-and-egg predicament, Loosen said, with money to construct the building on one end and funds to operate it on the other.

“That operating piece is really critical. You can have all the capital funding, but the project still won’t work,” she said.

Downtown View’s operating funds come through U.S. Department of Housing and Urban Development’s Section 8 subsidies, which cover 25 units, and a newly created rental assistance through Hennepin County, which covers the other 21 units.

Cole Minkel, a PPL property manager who handles leasing in the building, said residents will pay about one-third of their income as rent with a cap of $600 for the quad units and $650 for the studios. Minkel said many residents don’t have an income at all, but through connections to a career center on site, they can find jobs.

“The idea is that they’re here to form stability,” he said.

Now, five years after the building was just an idea, Downtown View is on track to become fully built and open by mid-May.

Goodman said the project is the product of a large number of really passionate people, from YouthLink and PPL to elected officials and donors. Thanks to a redistricting of the City Council map, the site is no longer in her ward, but she’s still looking forward to the ribbon cutting.

“I’ll probably be crying my eyes out,” she said.

A room with a view

Kofi said his fourth-floor bedroom has the “baseball view.”

It’s been about two months since the 22-year-old got the keys to his quad-style unit, which looks out onto Target Field. He’s been busy customizing the space and occasionally bringing video games down to the building’s lobby and turning it into an arcade hall with his three roommates.

“I’ve never really had a whole room to myself. I’ve always had to share a room, even growing up, so it’s kind of a little bit of a new adjustment. But I’m adjusting just fine,” he said.

Last August, Kofi started coming to YouthLink where he jokes that he’s “very well known,” thanks to his contagious energy.

“I’m always smiling, even on bad days,” he said.

While he used to go to the drop-in center, as a resident of Downtown View, Kofi said he’s grown independent. He has a job inside a grocery store in Northeast Minneapolis and hopes to finish up his last year in school. His goal this year is to save up money to pay off debt.

His bedroom is more than just a home to him, he said. It’s stability for him and his roommates, two of which he knows from living on the streets.

“It was like we started from the streets, literally. Since we’ve been at our all-time low and I’ve seen how you people are, I wouldn’t mind having you all as roommates,” he said.

Getting the keys made Kofi feel a little too fortunate, he said, but he’s making the most of it by bettering his future.

“It was just like ‘what’s next?’ You have to move on. It’s a new chapter. It’s not the end of the book,” he said. “It’s definitely a dream come true.”

For other residents, the transition to having a home has been difficult.

Lorraine Love, a transition navigator with YouthLink, said one resident has had a hard time dealing with the fact that his room’s window looks out to the shelter he once stayed at. The daily reminder has made the process of connecting with the building harder.

“It’s very uncomfortable with him. Anything that we gave him, he gave it away,” Love said. “That one was a really hard one for me.”

Huseby recalls one Downtown View resident who use to fall asleep on a couch in the drop-in center with all his belongings in a backpack nearby. Even with the bedroom upstairs, Huseby said he didn’t trust the new environment.

“He’s just fine, but he was fearful of leaving the streets. It’s a big transition,” she said.

A new model for homeless youth

Downtown View is just one part of how YouthLink is changing to better serve youth in crises.

The project is based off a Foyer model, an integrated living model of transitional housing popular in Europe that is centered on young people developing a plan to live independently. While residents may have depended on the drop-in center in the past, YouthLink encourages them to instead budget, learn how to grocery shop, cook meals and pay for bus fare. Instead of separated studio apartments, quad-style units with four lockable bedrooms and shared living rooms force social interaction and help residents learn to deal with conflict.

“It’s very intensively developed to teach the youth how to live as a community and very much focused on what is your aspiration and where are you going,” Huseby said.

It’s part of an independent, future-thinking approach that has fed other parts of the organization. Huseby said they’ve redesigned the organization through a $6 million office and facilities renovation to better focus on each young person’s journey. Instead of case managers, YouthLink now calls them “transition navigators.”

“We looked all over the agency to find the next step for them and not let them think about staying stagnate in their crisis, so it’s changing all of us to look this way,” she said.

Love said she was skeptical at first, but the new approach and housing model have worked. Downtown View betters their chances at success.

“That’s what’s the exciting thing is, that now we can say that we provide more of an opportunity to be successful considering all the services we provide,” she said.