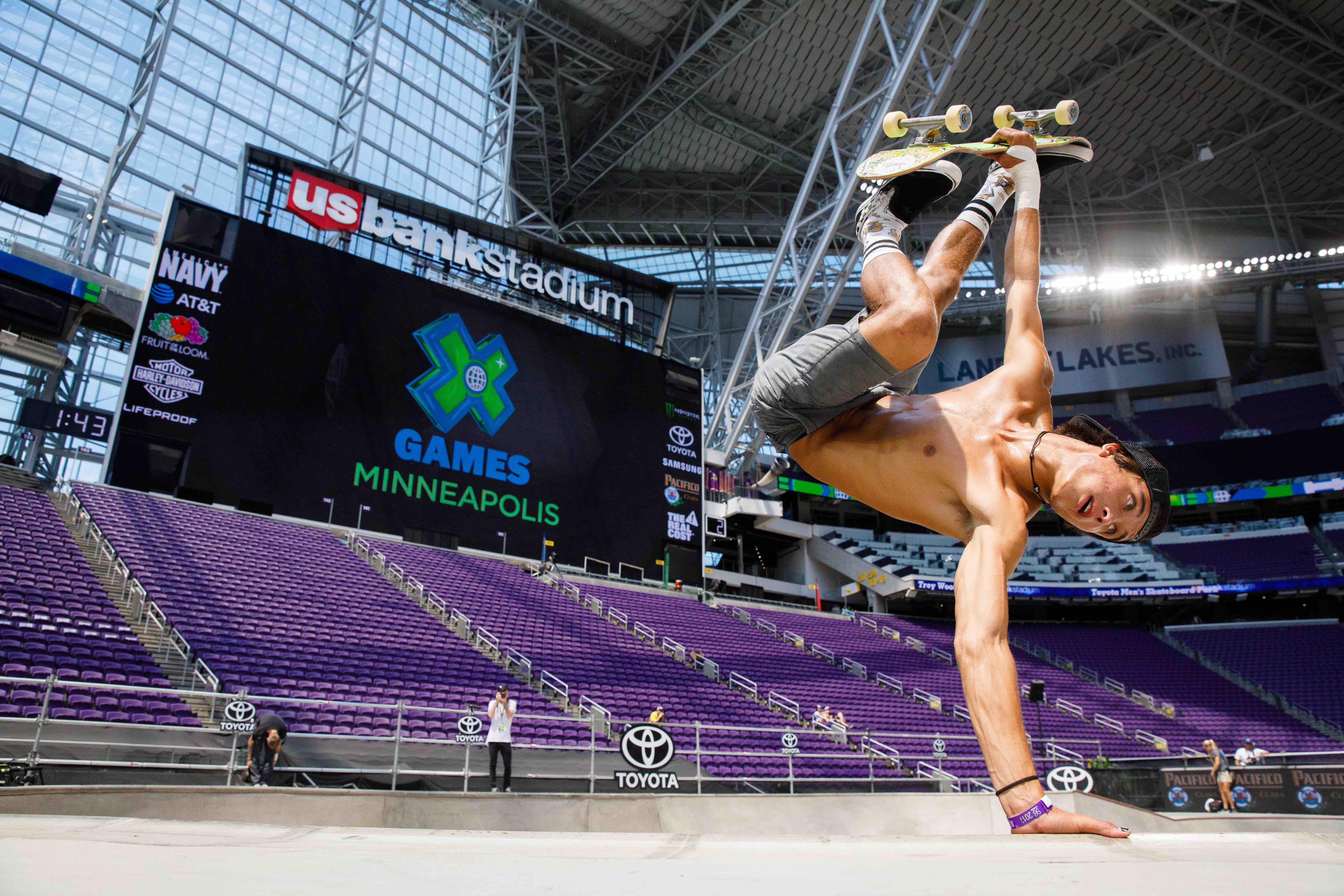 ESPN’s X Games will take over U.S. Bank Stadium for the second of four years

Few if any of this year’s X Games competitors know a Minnesota winter as well as Nicole Hause.

The 20-year-old started skateboarding after watching “Rocket Power” in her family’s home in Stillwater. Now she’s headed into her third X Games, an annual action sports competition that will bring athletes from around the globe to U.S. Bank Stadium July 19–22, and again in 2019 and 2020. Hause said it’s one of the biggest stages for her sport.

“It’s definitely the contest most people know,” she said. “It’s bigger than it used to be.”

This summer’s X Games is expected to bring even more than the 110,000 people who attended last year’s four-day event, a mixture of men’s and women’s skateboarding, biking and motocross competitions. The event at U.S. Bank Stadium went well enough that X Games organizers quickly signed off on two more years of presenting at the Downtown East stadium.

Ryan McGuinness, director of event development for the X Games, said the city offered a competitive bid for the event through its central downtown location, its local action sports fans and a burgeoning art scene that provides a backdrop to the competition.

“To be honest with you, we weren’t sure. We didn’t know much about Minneapolis,” he said. “I think we quickly found out that, in terms of brand fit, it checked all of our boxes.”

One unique draw for the X Games is U.S. Bank Stadium, the first arena in a host city that’s been able to host every competition in one spot.

“The venue itself just lends itself to a big event like ours,” McGuinness said. “We’ve never, in our history, been able to do everything we do under one roof.”

This year’s X Games will feature expanded festivities targeted at young people. The family-friendly X Fest will feature free BMX and skate lessons, art installations, demonstrations by professional athletes and even the last Minnesota appearance of Twiggy, a water skiing squirrel that’s set to retire from its own action sport.

These festival additions are growing at the X Games, McGuinness said, as well as the music and culture around the competition. Each of the four nights will be capped off by a concert with a lineup including DJs Zedd and Kaskade and rappers Ice Cube and Minneapolis’ own Brother Ali. The music and art feed into X Games’ mission of “celebrating youth and action sports culture,” he added, a culture with an international appeal.

“We have a very diverse, very international audience. You can see it in the athlete field. We have athletes from around the globe, quite literally,” he said.

Mayor Jacob Frey said the X Games is another opportunity to show off Minneapolis to an international audience. He thinks, like the X Games organizers, visitors will want to stick around.

“When visitors come to Minneapolis for the X Games, they are going to see a beautiful city alive with people enjoying the best summer city in the country and they are going to fall in love and keep coming back — just like the X-Games did when they decided to stay in Minneapolis through 2020,” he said in a statement.

Being a Minnesota native, Hause, who now resides in Oceanside, California, naturally talks about the weather.

“It’s funny being back (in the Twin Cities). (Oceanside) has all the things we don’t,” she said. “We have the extremes. It’s really hot and really cold.”

Hause said if there’s a hometown advantage to be had, it’s with the small, but committed group of local fans.

“It’s cool for them. They’re like, “Really? You’re from here?” she said. “It definitely intrigues them. It gives them inspiration.”

This year Hause is vying for her first finish on the podium at X Games. Her category will see just seven skaters from Brazil, Japan, Australia and the U.S., a narrow competition that Hause said makes her feel good about her chances.

The top-ranked Sabre Norris, a 13-year-old from Australia, led the June qualifier in Boise, Idaho where she busted out a 540, a trick that involves one-and-a-half rotations. It’s big moments like that that Hause said push the sport forward.

“As far as growing the women’s sport, it puts pressure on us. That’s a trick we should all learn anyway because it opens up a new bag of tricks,” she said.

Another 13-year-old, Brighton Zeuner, won gold last year in Minneapolis in the women’s skateboard park category, becoming the youngest person to do so. While other X Games races attract athletes in their mid-40s, Hause said her sport is attracting younger skaters so now that even she’s older than her average competitor.

The games are rare opportunities to share her hometown, a place she said most of her fellow athletes know nothing about, with the world. Hause said she’s has taken on a role as the unofficial ambassador of X Games to Minnesota. She hopes to get more locals involved in skateboarding.

“No one’s ever really been here. People don’t really even understand what Minnesota is,” she said. “I took on that role because I love skateboarding and I think it’s awesome.”

Thursday is free and open to the public all day. Competitions include BMX Vert and Skateboard Vert.

DJ Kaskade will play the Minneapolis Armory at 11 p.m.

DJ and Top 40 hit-maker Zedd will play the Minneapolis Armory at 5:30 p.m.