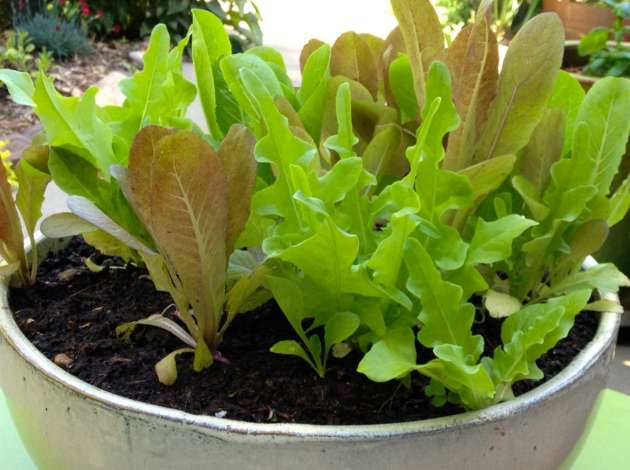 I’ve been growing food in my gardens for more than 15 years, but this season, already, it feels like about a zillion people have asked me questions about how to do it. Often, they want to know whether it’s possible to grow vegetables and herbs in less than full sun, which is defined as more than six hours of unfiltered, baking sun per day. Everyone is always happy to hear that yes, yes you can! So even though I’ve written about growing edibles in the shade in the past, I’d like to cover that again now, figuring that there are likely many of you who would like to grow some food but maybe you don’t because you think you can’t.

Here’s the deal. Without full sun you won’t get good crops of tomatoes, peppers, squash, eggplant and other plants that are grown for their fruit. (I have to say, though, I get a hearty crop of cucumbers in about five hours of sun.) Don’t think that applies to those other vegetables I just mentioned, especially tomatoes. If you grow tomatoes in partial shade, they will produce only sadness — I know, I’ve tried it. But plants grown for their roots and flowers will produce with as little as three to six hours of full sun or consistent dappled sun. That means beets, carrots, broccoli, cauliflower, onions, turnips and radishes can be successfully grown with four to six hours of sun.

Leafy veggies like kale, spinach, leaf lettuce, collards, arugula, mustard greens and Swiss chard can get by with only two to four hours of sun — though they will grow more lush in sunnier locales. If you have a garden that offers both sun and shade, one of the advantages of knowing what can take less sun is the ability to increase your harvest by tucking these plants in along shaded borders that are often though of as wasted space.

While there’s a lot to be said for the power of sun, there are some benefits to growing vegetables in part shade. Crops like broccoli and cauliflower won’t bolt as quickly as they would in full sun, tender lettuces will last longer and you won’t have to water constantly, which is always a plus. That said, though, it is important to monitor moisture levels in shade gardens carefully because these sites are often located beneath big trees or shrubs, as well as the overhang of the house or garage. So even when it does rain, the water may not reach your garden, and much of what does fall will likely be taken up by the root systems of greedy trees and shrubs.

Getting the right amount of light in a shady spot can be tricky. So if the light level in your garden changes dramatically throughout the day, one thing you can do to make the most of available sunlight is to grow your veggies in containers. That way, as the sun moves, the containers can be moved, too. I stumbled onto this idea a couple of years ago during my struggle to grow tomatoes in my shaded backyard and it has worked very well. Even if you don’t have that much sun anyplace, you can still increase the number of vegetables you can plant by trying this method.

I put my large pots on four-wheeled stands that I bought at IKEA for a few bucks, but many garden centers also carry them. (They kind of look like a metal garbage can lid on wheels.) Aside from smaller yield, the only real drawbacks to containers are that they dry out quickly so they often need to be watered every day once summer gets rolling. They also require more nutrients, so it’s a good idea to add some diluted fertilizer to the water you use throughout the season. I like to use fish emulsion for my edibles. It smells terrible the first day, but that dissipates over time. Whatever you do, don’t spill it on your shoes because even a good washing won’t get the fish stench out.

Check out Meleah’s blog: www.everydaygardener.com for more gardening tips or to email her a question or comment.