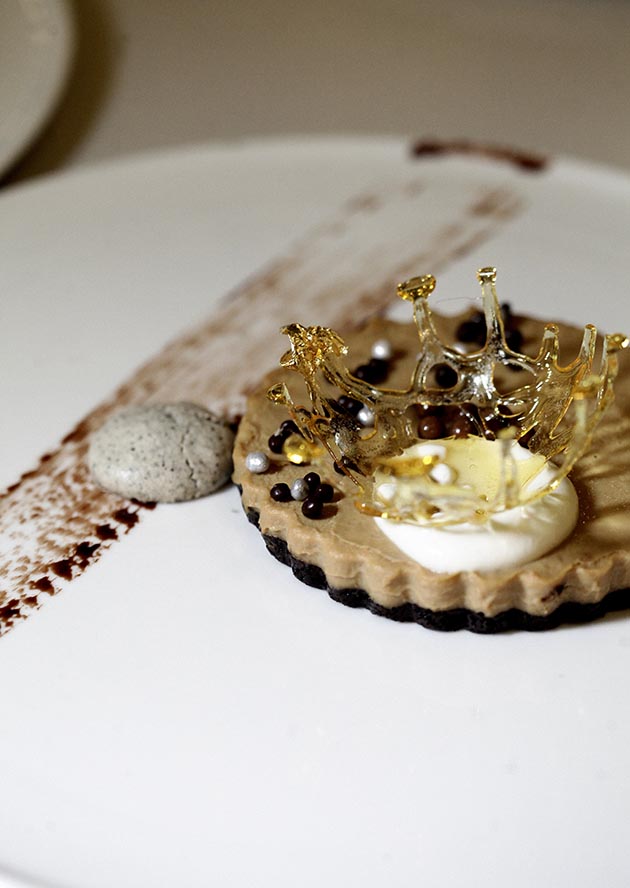 Tracing his career as a restaurateur in the Twin Cities, his adopted home, he’s always expected us to rise to the cause, to understand and appreciate the sophisticated cookery celebrated on menus floating from the various kitchens he’s helmed. He puts us on our best behavior, trusting we’ll get it, that we’ll understand and appreciate the thoughts behind his compositions and their culinary heritage: French technique married to his roots in North Africa.

In a word, he assumes we’re closer to, say, savvy New Yorkers than the folks in Lake Wobegon.

He’s added gauzy privacy curtains to the circular booths lining the walls (unfortunately, in my opinion, for they hide a portion of the dazzling zigzag motif). But the rest of the room sparkles as the new epicenter of see-and-be-seen.

It’s a chance for us to rise to our inner Scott and Zeldas, with a menu — and prices — to match.

Diners are greeted with a complimentary “amuse booze,” a sweet, vodka-based cordial to sip while perusing the menu. Starters (mostly $15) scroll from pastis mussels with tapenade tartine and tuna tartare with coconut daquiose, lime gel and orange powder (see what I mean?) to our choices. We began with frog legs (your grandpa may remember that delicacy from a Wisconsin supper club menu), here dressed in a nicely spicy tempura crust that coddles the tender, mild and juicy meat within. The pair is presented atop a suave English pea cream and attended by saffron polenta croutons, moist and magnificently corn-y squares.

Next we summoned a pair of scallops — giant, sweet and nubile — partnered with tomato concasse, a fried wonton and deliriously sweet-tart hunks of preserved lemon. We’d also ordered the shakshuka tomato tartine, having become addicted to this “hangover cure” on visits to Israel, but our servers thoughtfully took pains to inform us that this was a different presentation, upon a baguette. Not this time, then, but perhaps on a later visit.

Instead, we proceeded to the small plates section of the menu ($12–$19), enchanted by a description of braised rabbit stew that lived up to its promise: a comforting concoction of mild-flavored meat nuzzling up to bouncy, homemade gnocchi bathed in a rich gorgonzola cream. We could have ended our meal right there, well fed and happy.

The list continues with items like merguez sausage paired with tater tots; short ribs and sweet potato mousseline; kefta on harissa broth; and bone marrow — yes, right here in flyover country — served with Moroccan charmoula and “mother dough” boule. By the way, that bread (served in a basket later with our entrée) comes from the chef’s prized yeasty starter, passed down to him for over a century.

We chose the most Moroccan of the offerings, a tagine large enough for two hungry eaters — which we no longer were (doggie bag). The long-braised stew married lamb shank with carrots, onions, Brussels sprouts and sweet potatoes plus a mix of seven beans, all perfumed with cinnamon, rose water and a near-forest of rosemary. Good, for sure, but not the must-have I was expecting: less rich and dense than those I’ve encountered abroad, though that wasn’t the chef’s intent, to be fair. I’d love to see a choice of several tagines in the future.

Instead we perused the dessert menu, mostly $10 with the exception of an alluring assiette gourmande plate, $16, featuring cheese, a Napoleon, chocolate lava cake and French meringue.

We made fools of ourselves by devouring the crème brûlée to end all crèmes brûlées, its surface burnt tableside, hosting a mellow cream below. Next, an apple tarte tatin, overflowing with true-flavored fruit, spared of over-sugaring. Then the pièce de résistance (words that would sound stuffy anywhere else but here): a foie-butterscotch tartlet infused with espresso, sesame and crème fraîche. One of a kind, for sure, and not to be missed (nor for the faint-of-heart, but nobody ever accused me of owning that moniker).

Wines BTG, beer and interesting cocktails at “average” price points, too. Add in servers who know what they’re doing and care.

Maybe, then, this is the reincarnation of the Forum that will last.