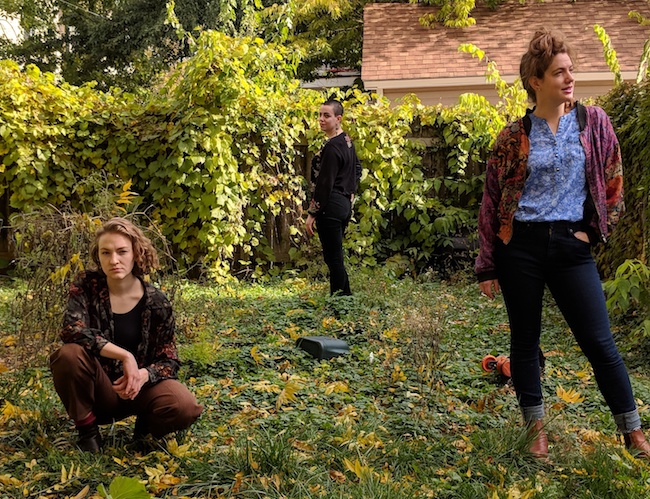 The co-headliners of a Nov. 29 concert at The Cedar Cultural Center, Lena Elizabeth and Sister Species are two groups that defy stereotypes of what female-led bands — especially ones featuring folky instruments — are supposed to be.

Abby and Emily Kastrul, the sisters of Sister Species, were looking for a band to open the release show for “Heavy Things Do Move,” their new album, when Cedar booking director Emmy Carter suggested Lena Elizabeth, a group led by singer-songwriter Lena Elizabeth Bredeson — who also happened to be planning the release of a new album.

“We thought it was an exciting way to collaborate, as opposed to compete with each other,” Emily Kastrul said. “There’s so much competition in the music industry. It was cool to say we can mutually lift each other up.”

“They are not your typical cutesy folksongs,” Abby Kastrul said. “I think we both have an unexpected element.”

For Sister Species, that unexpected element might simply be the self-described “orchestral pop” group’s size.

“When you show up to a little DIY venue and there are eight of you, including a horn section, people are like, ‘Whoa. What’s going on?’” Emily Kastrul said.

“There’s a lot of blunt honesty and anger,” Bredeson said of her music. “Those are really heavy subjects, and I think that’s not what people are necessarily expecting of somebody with a ukulele.”

A tool for healing

“Get it Right” is Lena Elizabeth’s first full-length album, and in it Bredeson takes on anxiety, depression and a life-long battle with eating disorders.

“Anxiety and self-hatred are things I’ve really struggled with my whole life,” she said. “These last few years have been a lot about acceptance for me.”

“Really, it’s a song talking to that person inside me that’s saying, ‘You’re not good enough,’” she said. “I don’t want that anymore, and I hope that it is inspiring for other people.”

Bredeson has often used music as a tool for her own healing.

“I wrote the best music when I was coming out of it,” she said. “I was not writing any music while I was in it.” For her, the creative process isn’t about negating one’s personal demons, but getting a handle on them. “I’ve been able to create the best things once I’ve gotten to a better place and have been taking care of myself,” she said.

“The idea is that there are a lot of heavy things that are moving through the album,” Emily Kastrul said. “Some mental-health stuff and some emotional journeys through loss or change — these human emotions that we all experience. It’s a journey about vulnerability and self-acceptance.”

Abby Kastrul explores anxiety and depression with her song “Take it Easy,” which is about self-acceptance. “Gaslight” is about being emotionally manipulated in a relationship. And “Flatline,” a song Abby Kastrul wrote when she started taking antidepressents, is about feeling numb.

“Everyone says, ‘There aren’t highs and there aren’t lows,’ and I thought, “Can I deal with that?’” she said. “It’s a reflection on how what could this be like for me.”

In the past several years, Abby Kastrul has tried several different kinds of medication for her mental health, and found that the process has informed her music.

“I guess it’s all about coping,” she said.

According to Emily Kastrul, songwriting is a great way to explore complex feelings and experiences.

“You sort of get three minutes to look at all the angles of something and to really feel it fully, and then it’s over,” she said. “It becomes a space you can access and touch and prod and examine this feeling, but it’s outside your body. It gives some nice separation and perspective from whatever heavy thing you are feeling.”

Both bands will play songs from their new albums at the Cedar show, which will also include guest artists playing with the bands and solo piano sets by both of the Kastrul sisters.

It’s yet another way for the musicians to embrace putting themselves out there in a raw and vulnerable way. Digging deep into emotions is a way for these artists to set healing vibes out into the world.