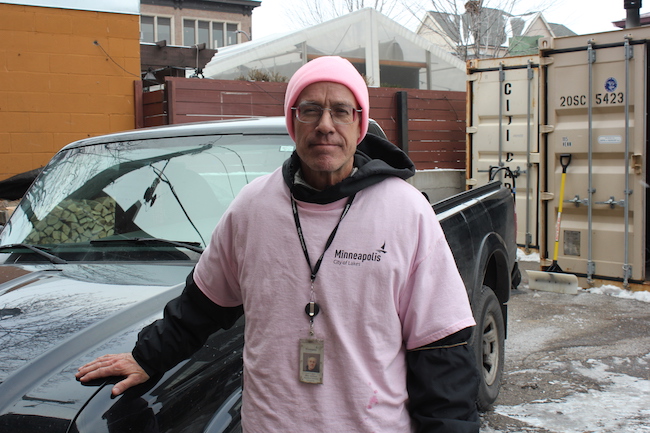 Lyle James is one of the dozens of carriers who have stocked street-side boxes and skyway racks with The Journal over the years. Photo by Dylan Thomas

Long-time carriers reflect on the end of The Journal

Before he began delivering newspapers nearly 25 years ago, Lyle James did janitorial work and assembled items like coloring books for a local daycare company.

That job didn’t provide much work for him during the summers, so he picked up a delivery route for the Star Tribune. Immediately, James was drawn to the independent, do-it-yourself style of the job.

“I found out I liked it so much that I just started calling around to the different papers,” he said. “Within a few years, I had dropped the job at the place that made the daycare items and went full-time with the newspapers.”

This eventually brought James to the Downtown Journal, as it was known at the time, in the mid 2000s. By then, he had already been delivering sister publications Minnesota Parent and Minnesota Good Age for Minnesota Premier Publications, which also publishes The Journal. The company’s distribution manager, Marlo Johnson, offered James delivery routes for the Downtown Journal in Northeast and around the University of Minnesota, which James stuck with for the next decade.

“I’m going to hate to see the Downtown Journal go,” he said. “The routes I had were very fantastic and easy to deliver, but that’s technology, I guess.”

James isn’t quitting his job. He plans to continue delivering about a dozen other local publications, including MPP’s other community newspaper, the Southwest Journal, for the next five years until he reaches retirement age. And he still has enough work delivering newspapers to keep him busy more than 40 hours a week.

“To tell you the truth, I’m surprised I’m still in business with any of these papers, because of the lack of advertising revenue due to the Internet,” he said. “I’m just surprised that they’re hanging tough.”

As long as there’s business, delivering newspapers will continue to suit James.

“I’ve never been warm toward bosses,” he said. “I like the freedom of being able to do what I want.”

The same can be said for John Manders, who started delivering The Journal in 1997, when it still carried the Skyway News flag.

“It kind of gets in your blood to do this,” Manders said. “We like being outdoors, and we like being independent. We don’t like being in an office with someone looking over our shoulder.”

Throughout the years, Manders delivered the paper as it transformed from the twice weekly Skyway News to the every-other-week Journal.

Like James, he’s an independent contractor and does delivery for multiple news publications around town. In his time delivering The Journal, Manders said he dropped off each issue of the newspaper to 80–85 locations, most of them downtown and in the skyways.

Delivering The Journal took a full day of work, not including the half-hour he spends loading his Ford Ranger with 1,000 pounds worth of newspapers.

Anybody in the delivery business knows that this means quicker wear and tear on their cars. But the extra car maintenance that comes with the job was well worth it for Manders. The pay was good and drivers were treated well, he said.

Still, Manders found new challenges delivering The Journal downtown in recent years, navigating more paid parking spaces and limited commercial parking zones. It didn’t help that he could only park at the meters without charge before noon.

“It just got more difficult, more time-consuming,” he said. “You had to keep looking for places to park.”

That said, it’s been a good run for Manders, and he plans on continuing to deliver the Southwest Journal and other local newspapers for at least another year. He isn’t sure if he’ll do anything special to pay homage to The Journal after making his final delivery of the publication.

“I might have a couple of beers afterward,” he said.