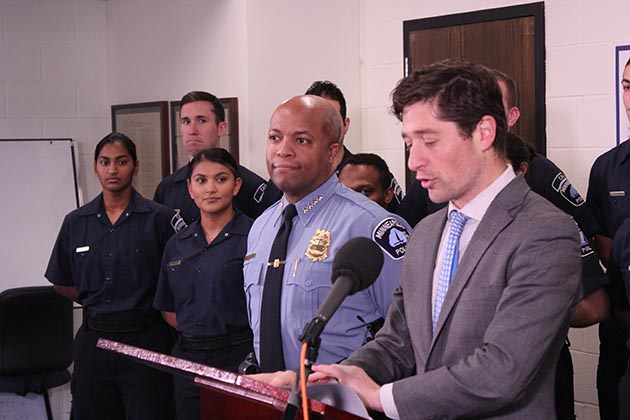 Mayor Jacob Frey announced his intention to reappoint Medaria Arradondo to a full three-year term as chief of the Minneapolis Police Department.

Minneapolis’ first black police chief, Arradondo has led the department since last summer. He became interim chief in July 2017 following the resignation of former chief Janeé Harteau, who left the department after an officer shot and killed a woman who called 911 to report a sexual assault, and the next month was appointed to serve out her term.

If confirmed by the full City Council, Arradondo’s three-year term will run Jan. 1, 2019–Dec. 31, 2021. The nomination is scheduled to go before the council’s Executive Committee Nov. 14.

A 29-year veteran of the department, Arradondo “isn’t just from Minneapolis, he is of Minneapolis,” said Frey, speaking against a backdrop of 25 police cadets at the MPD Special Operations Center in the Webber-Camden neighborhood.

“Today he commands respect in City Hall, among our MPD officers and, yes, throughout our entire city,” Frey said. “Why? Because he has lived his values, he has built a career worthy of our admiration and he treats every person he meets and with whom he serves with the dignity and respect they deserve.”

Arradondo said the “roadmap” for his leadership of the department has “trust, accountability and professional service.” He highlighted the department’s efforts to reduce violent crimes — rates of assault, homicide and robbery are down citywide compared to 2017 — and gun violence, its commitment to making crime data public and to demonstrate “compassionate and committed outreach” to people experiencing homelessness or mental illness.

“However, even with the significant progress that’s been made this year, I’m also aware that for some in our city there still exists a turmoil of trust with the MPD, and I acknowledge that belief,” he said.

Arradondo said the department needed to build trust with the community so that, when something happens, Minneapolis residents “at least give us the benefit of the doubt.”

He said officer wellness and treating the “invisible injuries” officers’ incur in the line of duty was another priority, as was recruiting diverse officer candidates.

Arradondo was born and raised in Minneapolis, graduated from Roosevelt High School in 1985 and joined the MPD four years later. He began as a patrol office in the Fourth Precinct and has served in various roles for the department, including First Precinct inspector and assistant chief.

He is the 53rd person to serve as chief of the MPD, the state’s largest police department.