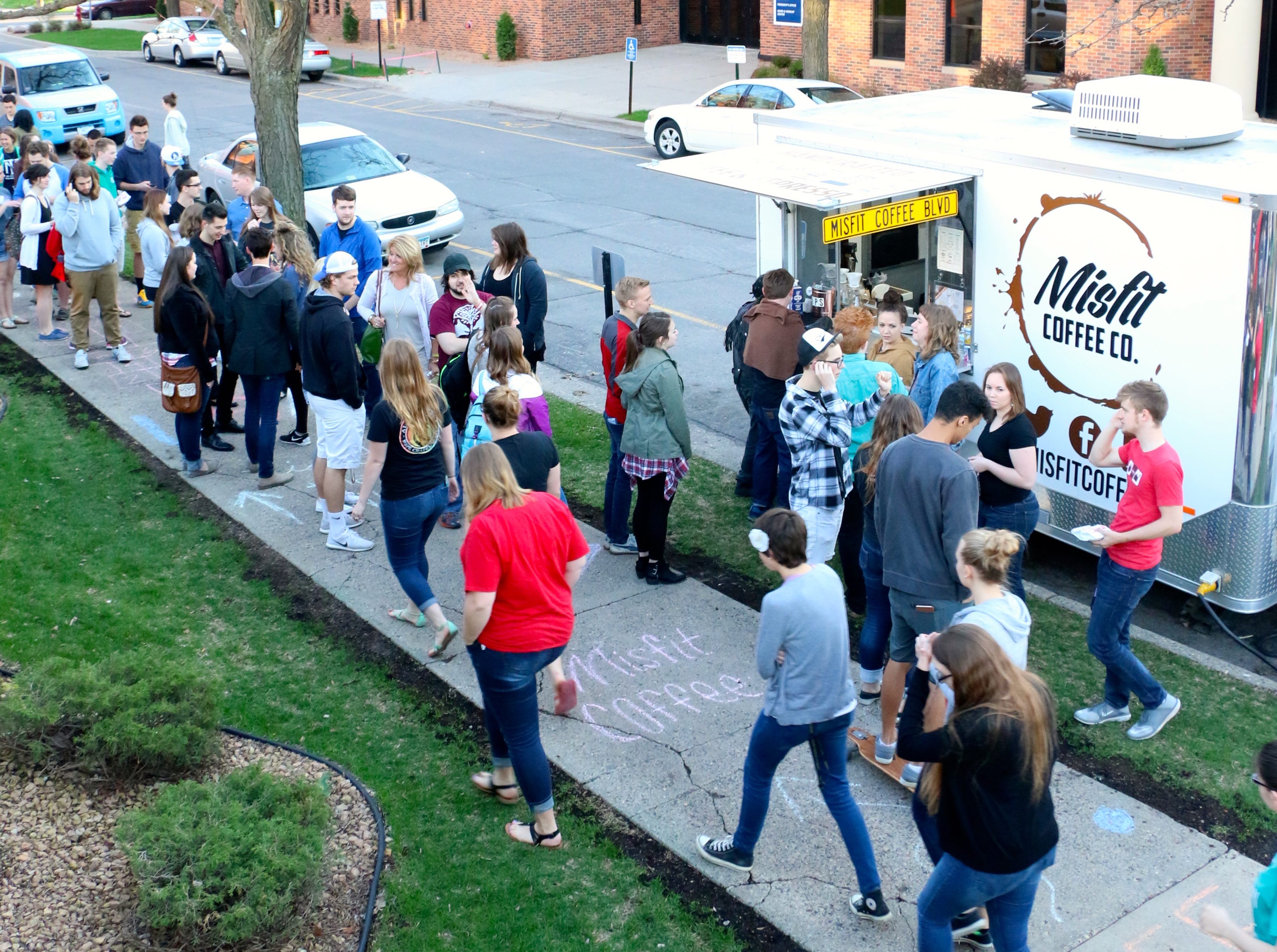 With warmer weather on the way, the city’s mobile restaurants prepare for a new season

Fritz and his wife Haley run O’Cheeze, a food truck business specializing in the gooey comfort food, and Dough Dough, a mobile eatery that serves safe-to-eat cookie dough. Now that a spring thaw is on the horizon, the two and the rest of the growing Twin Cities food truck community are returning to their trucks and preparing for a new season of music festivals, weddings and farmers markets.

“We’ve been very, very, very dialed down for the winter,” he said. “I get really excited when the food trucks come out.”

Winter means a lull for this buzzing industry. The bitter cold months in Minnesota are particularly hard on food trucks and the employees.

Some may think it’s hot inside a food truck because of the kitchen and generator. But Fritz said due to the air outtake and winter winds breezing through the open window, the truck can be a potentially dangerous work environment.

The equipment is prone to break under freezing temperatures, a particular problem for Marcus Parkansky, founder of Misfit Coffee Co., a coffee trailer that’s typically parked near Gold Medal Park during the spring and summer. Freezing temperatures mean ice, which can crack a water heater or an espresso machine. Parkansky has moved the shop inside the nearby Izzy’s Ice Cream in the past, but thanks to five straights weeks of Holidazzle and then Super Bowl events, Misfit has stayed busy through the winter.

“Most food trucks don’t use much water, but our business is primarily water,” he said. “Every year I’ve ruined my hot water heater.”

The de-wintering process in the spring involves a deep clean of everything, “even the things you touch twice a year,” Fritz, a self-described neat freak, said. He uses a power washer to get a clean slate every single season. Then there’s hiring new employees, developing menus and stocking the truck.

The drop off in business affords some food truck vendors time to develop their menu, market their business or simply take time off.

Last spring, after a long winter, Tony and Haley Fritz created the Dough Dough truck, which has already spawned a shop in the Mall of America. This winter, O’Cheeze went from the streets and into the skyway, adding its first brick-and-mortar location in the Baker Center Roanoke Building at the end of January. Each new business was preceded by a winter lull.

“It all stems from us having to sit down and think of new ideas and put pen to paper,” Fritz said.

Parkansky said the winter has brought a bit of downtime so he can focus on growing other parts of the business, such as selling wholesale nitro cold brew coffee to local purveyors. He’s now looking for a brick-and-mortar home for the coffee trailer.

One thing Fritz said he’d like to see is Minnesotans embrace the season with a winter food truck festival. The season has few outdoor events for mobile eateries outside the annual Winter Beer Dabbler and Red Bull Crashed Ice.

“We would think something would do really well, but somebody would have to take a risk to do it the first time,” he said.

Several new food trucks are coming out this season, including two for plant eaters.

Herbivorous Butcher, a vegan butcher shop based in Northeast Minneapolis, announced earlier this year it will be rolling out a mobile version of its lunch operations. Joining it on Twin Cities streets will be a food truck version of Reverie, a plant-based café that closed last summer in Southwest Minneapolis.

Kirstin Wiegmann, who co-owns Reverie with partner and chef Jeffrey Therkelsen, said the trucks will be a win for those with plant-based diets.

“It’s an exciting new development for the Twin Cities food community,” she said.

The Reverie food truck will actually be an expansion of the restaurant in a way. The mobile eatery will have a full kitchen, while the brick-and-mortar space didn’t have the ventilation hood required of a typical restaurant operation.

“I know it’s super-weird. We’re pretty pumped about it,” she said.

Wiegmann said they may also support the truck and a catering service through a commissary kitchen. She plans to pick up the truck in Portland in early April, drive it back and have it ready for events later this month.

A preliminary menu features barbecue mushroom tacos with pickled veggies and spiced peanuts and a Cuban jackfruit sandwich on a Vietnamese French roll. There may also be breakfast options like a Mojo Veggie Hash with sautéed tempeh.

Aubry and Kale Walch, the brother-sister duo behind the Herbivorous Butcher, plan to have their truck out in downtown Minneapolis this June. The shop already creates daily hot meals like meat-free sandwiches.

The truck will be wrapped in May in time for its first dates: June 9, 16 and 23 at St. Paul’s Lake Monster Brewing and June 10 at Bauhaus Brew Labs.

One of the city’s newest food trucks has been a friend to the growing craft brewing scene. Fused Craft Brewed Eats, which co-owners Mark Smail and chef Jamie Miller and their spouses launched last August, infuses beer from local breweries into its recipes.

The food truck serves creatively named pub grub and chili, from the Voodoo Verde, a green chicken chili, to the spicy veggie Red Headed Step Chili. Smail said they plan to roll out a menu of sliders this year. Fused also serves pretzels — with beer cheese and beer mustard, of course — cheese curds with bloody mary ketchup and totchos, or tater tot nachos.

“Got to have a hotdish in Minnesota, right?” he said.

Smail said in a busy Twin Cities food truck scene Fused rises above others with its charm, which comes through in its eccentric menu items and partnerships with breweries.

“We take a lot of pride in the quality of food that we have, but … the biggest thing for us is to have personality,” he said.